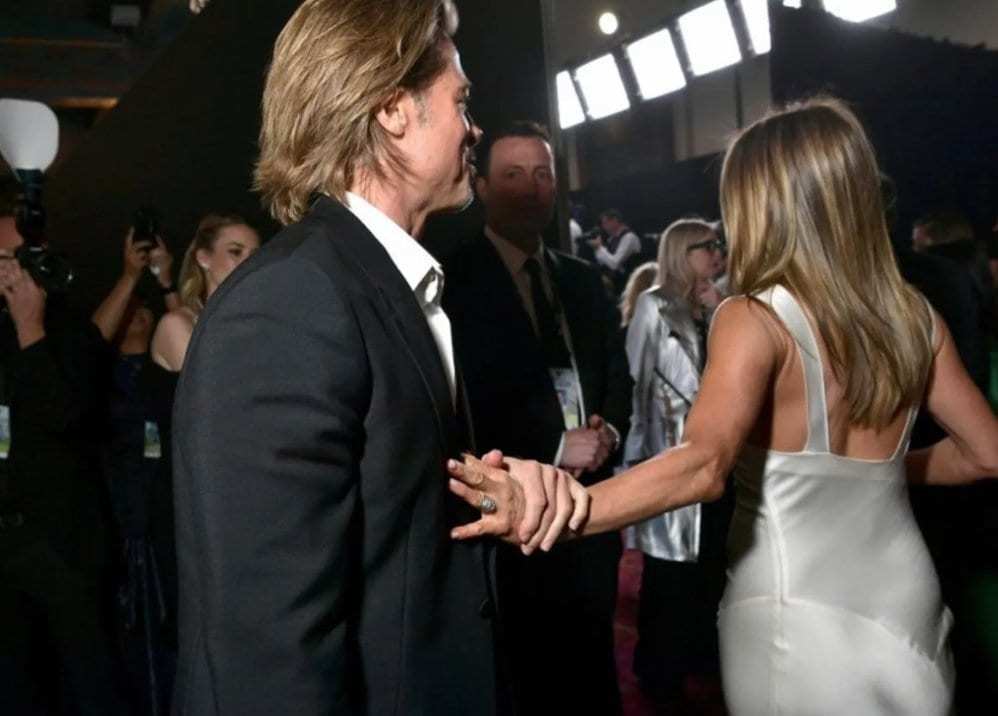 Before we get to any of last night’s winners from the 26th Annual SAG Awards, can we please talk about the reunion of Jennifer Aniston and Brad Pitt??

Pitt took home an Actor for Outstanding Performance by a Male Actor in a Supporting Role for his portrayal of Cliff Booth in Once Upon A Time… In Hollywood. His speech was great! He joked about putting his win on his Tinder profile, Tarantino’s foot fetish, and his divorce. As he joked about his divorce they cut to Aniston smiling at him.

A few awards later, Aniston won for Female Actor in a Drama Series for her performance as Alex Levy in The Morning Show. She looked shocked to win. This was her second SAG win, her first was for Ensemble cast in Friends, where Pitt also co-starred as a guest in one episode.

Comically, one user on Twitter found just the right moment to convert last night’s encounter at the SAG Awards into an awesome meme that all Friends fans would appreciate:

She gave a great speech where she talked about getting her SAG card, thanked those who worked on The Morning Show and even gave a shout out to her friend and multi time co-star Adam Sandler for his good work.

Sandler was snubbed this year after giving great performances including his leading role in Uncut Gems. The SAG Twitter account later tweeted out a video of Brad Pitt backstage watching Aniston’s win with adoration and eyes glued to the screen.

After Aniston’s speech she exited backstage where she reunited with Pitt. While there have been many rumors over the years about Pitt and Aniston back together, the interaction backstage made it seem more likely now than ever. They were of course immediately photographed talking and when Aniston went to walk away, Pitt pulled her back to say one last thing.

But that hand grab though! That definitely helps keep the dream alive that maybe, just maybe, someday soon we will see Brad and Jen get back together for their happily ever after two decades in the making.

Even if they don’t get back together lets still celebrate their highly deserved wins in their respective categories.

Don’t stop reading now just because I am done talking about Brad and Jen. There are many more moments to highlight!

Leonardo DiCaprio presented Robert De Niro with an Actor for Lifetime Achievement. De Niro’s clip package highlighted his entire legendary career from Taxi Driver to Meet the Parents to The Irishman. His impassioned speech included his excitement about his career moving forward and urged people to vote stating that he has every right as a citizen to speak up where he sees corruption and injustice.

The show also gave a shout out to shows that ended this year. Many of the shows were on for a very long time.

A lot of good shows ended this year including Big Bang Theory, Jane the Virgin, and Game of Thrones. Game of Thrones was nominated in many categories and won several including Peter Dinklage’s win for Male Actor in a Drama Series.

Joaquin Phoenix joked about losing roles to DiCaprio and spoke about what great actors all his fellow nominees are and commended them for their great performances. He also spoke about how he was standing on the shoulders of his favorite actor, Heath Ledger who passed away shortly after his portrayal of the Joker in Christopher Nolan’s “The Dark Knight.”

You can check out the entire list of winners here. The winners of the night gave insights into what might happen at the upcoming Oscars.

If you missed the SAG Awards you haven’t totally blown your chance to enjoy award season. Make sure to tune in to watch the Oscars February 9th at 8pm EST/ 5pm PST.