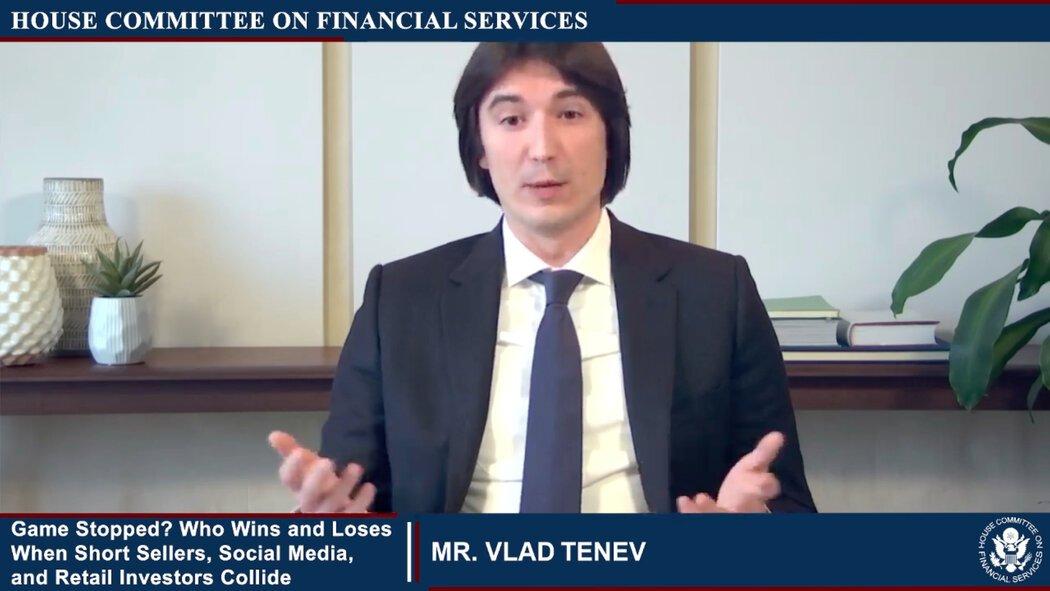 Dozens of members of Congress participated in the hearing, and most asked well-informed questions that covered a range of topics from the GameStop scandal to the suicide of a young retail trader named Alex Kearns in 2020. Kearns died after noticing that his Robinhood account incorrectly displayed that he owed the company $750,000 after trading options—something his family insists happened due to his inexperience in trading.

Robinhood, a company that boasts its ability to ‘democratize finance’ was, at the time, criticized over the fact that its platform allows inexperienced traders to make risky financial decisions. The sentiment was echoed once again when thousands of retail traders reported major losses in the wake of the GameStop scandal—some that had taken out loans to invest in the highly volatile securities before Robinhood itself restricted trading, causing the stock to plummet.

While Tenev, Griffin and Plotkin insisted that Robinhood’s decision to restrict trading was not influenced by either of the hedge funds involved in the scandal, questions about the ethics of the scandal mounted. Tenev did admit (after a lot of prodding) that Robinhood faced liquidity issues over the popularity of the meme stocks and had to dilute his own position in the company in order to meet demands from Robinhood’s clearinghouse. The amount, around $3 billion according to Tenev, was a cause for concern by several Representatives over whether the company can be trusted in representing the financial portfolios of retail traders.

The hearing, overall, went well for retail traders that have—up until now—felt largely unrepresented in the fallout from the GameStop trading scandal. Criticism toward the Wall Street players was pretty bipartisan. Representatives from both sides of the political spectrum took turns grilling the CEO’s, and there were a few moments that felt particularly vindicating.

There were moments when Representatives like Congressman Michael San Nicholas applauded retail investors while warning Tenev that investors that lost money in the scandal deserve “a lot more than an apology.” The Congressman also pointed out that Robinhood’s business model takes advantage of its customers, and called the practice “very troubling” as it benefits the existing shareholders in Robinhood, a private company.

“Robinhood was clearly not ready to accommodate some of the excess transaction volume and in my humble opinion, really did not anticipate nor understand what was happening,” says Dr. Clemens Kownatzki, Assistant Professor of Finance at Pepperdine Graziadio Business School. “The notion of the little guys having punished some hedge funds was also exaggerated. Yes, some short sellers and hedge funds may have blown up. However, the larger market makers and certainly some of the more astute hedge funds saw an opportunity to sell a stock like Gamestop to retail investors at prices they could never have imagined,” Dr. Clemens says.

Other representatives criticized Robinhood’s slogan in the first place. Representative Cindy Axne asked Tenev who, exactly, Robinhood is democratizing finance for—implying that the company works to benefit the wealthy WallStreet players that have stake in the company.

Understandably, Redditors were tuned into the hearing with great interest. Forums on the SubReddit r/WallStreetBets exploded with chatter about the hearing throughout Thursday afternoon. “I would really have liked if the representatives would have pressed Plotkin more about his position and announcement in the week of the squeeze,” wrote one user on the forum. Others agreed, wondering why Melvin Capital put out a press release to announce it had closed all of its shorts in GameStop when that didn’t seem to be the norm for other investments.

“RH has to level the playing field,” wrote another user. “They profit on pay for flow much like FB sells our data to advertisers. They need to reopen the API that use to feed Robintrack so that we are on the same page as Citadel. They use our data we should know what data is being fed to Citadel,” the user wrote. Concern over Robinhood’s data collection practices were voiced in the hearing, but not extensively.

Other users praised Keith Gill, otherwise known under his screen name Roaring Kitty, who profited millions off of retail trading on GameStop. Gill maintained that his decision to invest in GameStop came from his own research that suggested the company was undervalued. He explained that he did not come from money, and expressed that his ability to trade in the stock market was something he had to work hard on his own to understand, highlighting the disparities between retail investors and hedge funds that are able to invest millions of dollars into stock market analysis and education.

Some key takeaways from the hearing seemed to be that there is need for some type of reform in the ways that the stock market is set up, currently, to benefit the ultra rich. Not all Reddit users agreed though, and some pointed out that increased regulation often ends up only hurting those that it intends to help. “That hearing was a little scary for me,” wrote one user. “They’ll call it regulation on predatory behavior but really it’ll limit the primary freedom the middle and lower class have when it comes to finances to a set of rules still controlled by the haves to keep the market predictable vs the element of chaos introduced by millions of individuals,” they said.

Answers on how the United States government will react to the scandal remain unresolved. The GameStop scandal upended much of the discussion about the stock market, and highlighted a need for more transparency in the financial world. But it is likely that resolutions to the issue will be more complicated than they seem right now.

“GameStop’s short squeeze revealed the powerful influence of retail investors, but it also portrayed that online brokerages like Robinhood can’t always support it,” Reynolds says. “When Robinhood prevented more investors from buying those popular stocks, it meant those who invested their money in GameStock or other stocks lost out on money,” he says.