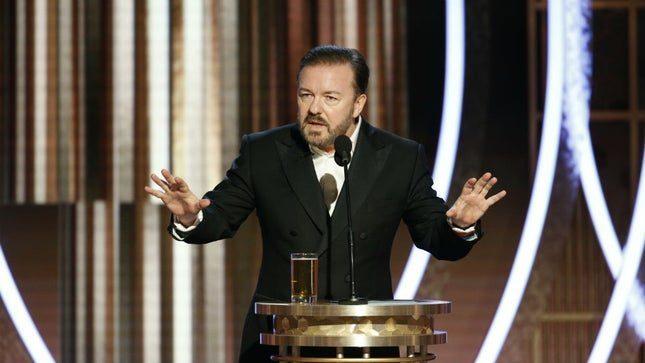 It’s a little bit of an awkward year in general for the Golden Globes. Celebrating Hollywood when Australia is burning and tensions with Iran are at a terrifying high seems in poor taste, but the show must go on.

Ricky Gervais, the host of the 2020 Golden Globes, did not shy away from criticizing Hollywood and its excesses, at times making the audience rather uncomfortable. Gervais joked about members of the privileged Hollywood elite making political speeches. He notes that celebrities have no right to get up and lecture the common person.

Gervais did not shy away from controversial subjects, clearly uncaring about offending his audience. In one of the funnier moments of the monologue, Gervais said,

He obviously didn’t kill himself, just like Jeffery Epstein. Shut up. I know he’s your friend but I don’t care. You had to make your own way here on your own plane, didn’t ya?

He also joked about Leonardo DiCaprio and his penchant for dating much younger women. DiCaprio was in the audience as a star in Once Upon A Time In Hollywood.

While some of the jokes were funny, others, like this one about Felicity Huffman, completely fell flat, much to Gervais’ frustration.

Throughout the monologue, Gervais makes abundantly clear that this will be his last time hosting, and he doesn’t care what the audience, or the Hollywood powers that be, think of his humor.

While the Hollywood elite may have felt the monologue was a little awkward, according to a Twitter poll by Entertainment Weekly, the fans gave it a thumbs up.

Good or bad, the whole thing gave rise to some fantastic new memes and reaction images, like this delightful face from Amy Poehler.

Published in Entertainment, Hollywood and News