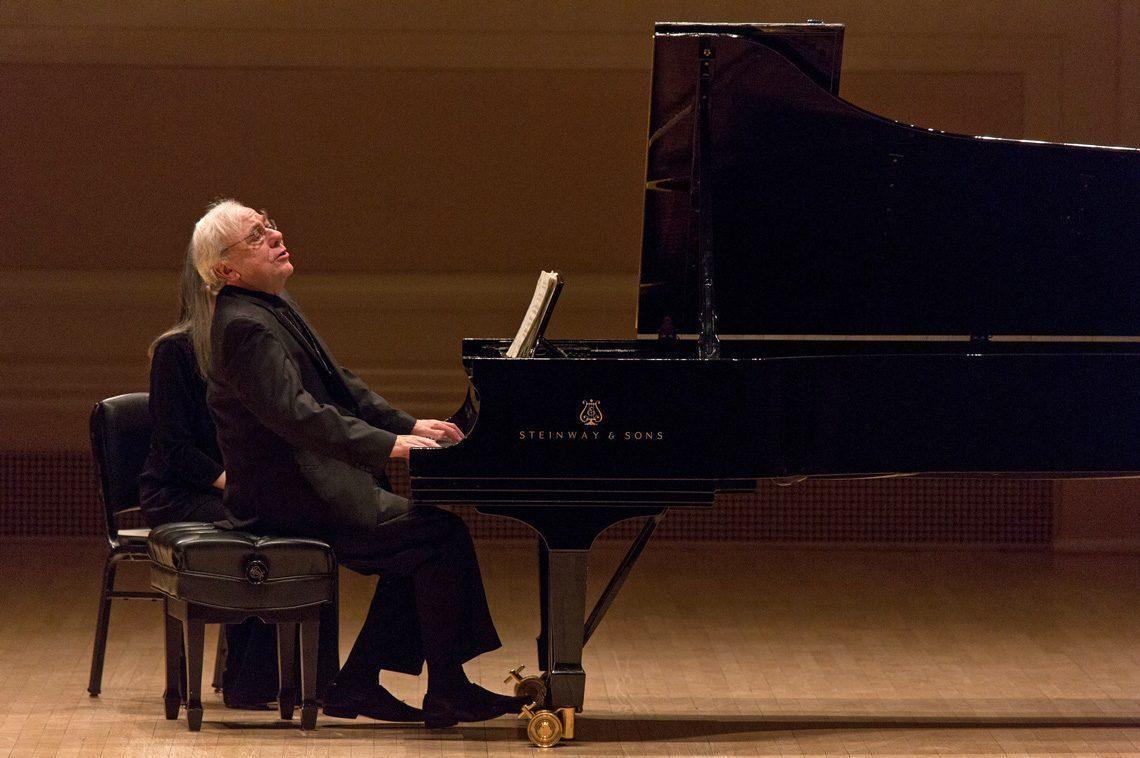 When pianist Richard Goode, one of the most acclaimed pianists of our time, is on the road, he gets in his practice time wherever he can. He was in San Francisco last week, and his venues for practice included backstage at the San Francisco Symphony, and, perhaps more surprisingly, a piano store.

“They have really good pianos,” Goode laughs. “So I went in for a few hours to get some work done.”

Goode returns to Boston as part of the Celebrity Series on Saturday, November 9 at NEC’s Jordan Hall to perform a program of Bach, Debussy, Chopin, and Janacek.  He took some time off from practice sessions to provide some insight into how the program came together.

As a pianist “I was starting with the Bach,” he explains, “and then I was intending to play the Bartok Suite Opus 14. It felt appropriate because the Bach piece is a dance suite and the Bartok is also kind of a dance suite. So it would have made a nice opposite number to the Bach.

“And then you bring in Debussy, which makes sense because Bartok admired Debussy so much. The only problem is that I’ve always loved the Bartok piece but I couldn’t play it to my satisfaction. I worked on it, and I still loved the piece, but somehow it was not for me to play.”

Goode says that a successful musician — and especially a pianist — needs a measure of humility to go along with his or her versatility.

“You can’t play everything equally well,” he says. “I’m comfortable with Bach and Chopin. I love to play Chopin’s mazurkas because they represent the absolute heart of his music. It’s the most personal and most varied body of work that he wrote. And when I play them, I feel more like an improviser, because I think they invite rhythmic improvisation and, I would say, emotional improvisation.

“But with the Bartok, I took it out of the program. It’s one thing to say, ‘I decided not to play it.’ It’s another thing to say afterward, ‘I shouldn’t have played this because I don’t play it well.’ So I thought the first approach was better than the second.”

Goode says the best performing pianists understand their limitations, whether it’s in terms of playing a piece or simply understanding it.

“I know pianists,” he says, “who won’t touch 20th-century repertoire, because they cannot hear the harmony in it. So that makes sense for them.  I played all the Beethoven sonatas, and when you record the cycle, you have to play them all. Some, I felt, I didn’t play so well, and some didn’t suit me, and others I didn’t feel happy with temperamentally.

“Still others, of course, I feel supremely happy with. I mean, we’re not machines, so part of being successful at this is understanding your own limits—your taste, your approach, and only performing things that work for you.

“There’s so much music to perform that this doesn’t have to box you in. There are so many pieces I still haven’t gotten to in my career. The literature for solo pianists is so vast. So it’s not as though you have to stick to a few things and only play those over and over.

Play what you play best

“The key is trying to limit yourself to perform only the pieces that will be best for you and the audience. Otherwise, you’re doing everyone—yourself, the composer, and the audience, a huge disservice.”

Goode points out that the repertoire for musicians—soloists and orchestras—has increased as musicians have gotten better.

“The training is so much better today than it was a generation ago, or certainly a century ago,” Goode says. “There’s a recording of Stravinsky conducting the Rite of Spring in France in 1929. It’s interesting to hear it because you’re so accustomed now to hearing remarkable performances of that piece from every orchestra.

But in those days, the orchestra was having a very, very hard time even staying together. It’s really quite a mess even with Stravinsky conducting. You can hear how much of a strain it was. Today, practically any good college orchestra can play it. That’s an indication of far things have come.

“Or look at Beethoven. When he wrote the Hammerklavier sonata, he said, ‘This is something that will present a challenge to any pianist for the next fifty years.’ He was proud that he had written something so incredibly demanding, intellectually as well as technically. Today, music students at the top schools can do a fantastic job with Hammerklavier. So that’s a factor as well.”

“Arthur Rubenstein was a pretty good pianist, wouldn’t you agree?” Goode continues. “He didn’t like playing the idea of the Chopin etudes. He said that they were so demanding, and he didn’t want to do them. Many pianists will now play, as a matter of course, all of the two dozen etudes. So if it’s okay for Rubenstein to say, ‘There are some things that don’t work for me,’ I think it’s legitimate for me to say the same thing!”