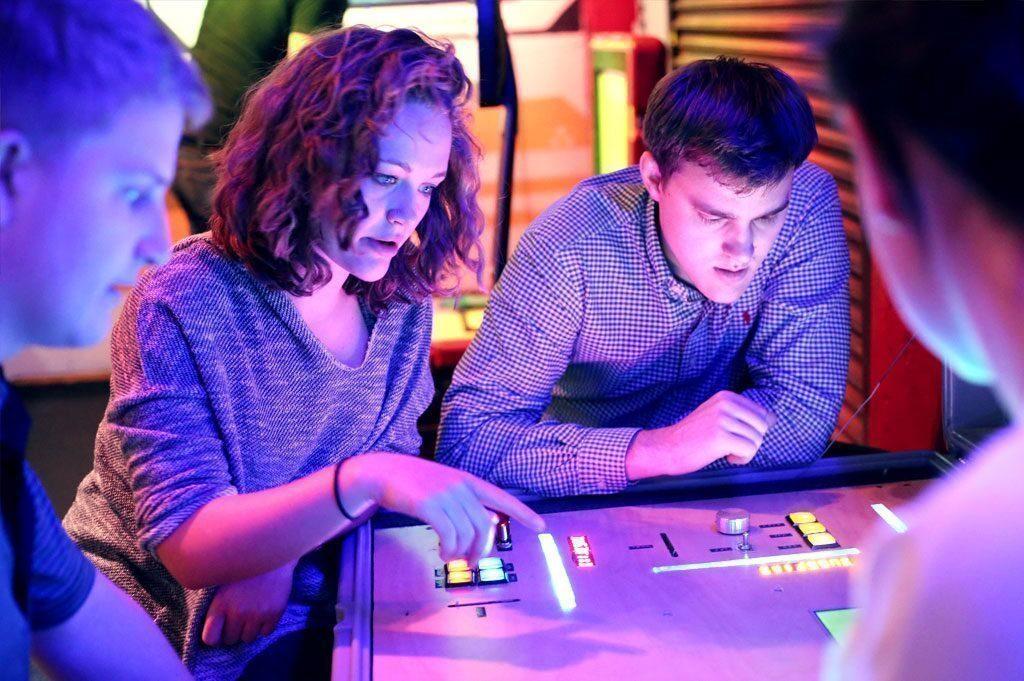 Think your work team is tops? Want to pit your workplace team against world-renowned, modern-day Myrmidons from Facebook, Google, IBM, SalesForce, and the Federal Government.

Look no further than Reason — an escape-room-meets-team-building venue in San Francisco that, on the success of its first location, launched a second called “Crash Site.” A total freak show, Crash Site Escape (its full name) pits teams against the clock in a sweaty, brain-wringing slug-fest against the clock. It’s for those who can solve a Rubik’s Cube — but where you are the Rubik’s cube, explains founder Mike Chen.

Recently in San Francisco during TechCrunch Disrupt, Grit Daily got a nice taste of Reason’s second launch, Crash Site, inside and out. For those who want the “cheat codes” for the game, we got what we could out of founder Mike Chen.

Grit Daily: You had your own interesting ventures before Reason. Share those.

Mike Chen: Years before Reason, Crina and I worked in corporate innovation. Our jobs were to invest and commercialize emerging technology for companies like Mercedes-Benz, Lufthansa, Absolut, Unilever, and Siemens.

During this period we got a chance to travel to 50+ countries to launch various innovation projects. This is also where we became escape room enthusiasts and saw an opportunity to transform the medium into a platform for technology exploration and team optimization.

GD: For the uninitiated, what is Reason?

Our games maintain the standard escape room format. Upon entering the room with your team, the countdown clock begins. The team must work together to uncover clues and use problem-solving skills to complete a series of logic-based team challenges in order to escape.

GD: What can you tell us about the Crash Site Escape?

MC:  So an ancient alien satellite has crashed into Earth and is set to detonate unless stopped. The players’ mission is to disarm it before time runs out by exploring the crash site for clues and gaining access to its various sub-systems. The Crash Site is loaded with future technologies like gesture control, holograms, emotion AI, VR, and tons of lasers!

The game is designed for team-based problem solving and requires players to cross-pollinate so they have to work with different people during the game. Imagine facing a large problem like a crash site. The team will need to break the problem down into smaller parts and coordinate their effort across the different areas in order to be successful. Kind of like being at work!

GD: How big is this thing?

MC: This thing is BIG! It’s the largest single instance escape room in the industry and can accommodate up to 30 players in a unified mission. It’s nice not having to split a team up and things tend to get a lot more interesting with a larger group. You start to see natural leaders and communication networks emerge due to necessity.

We also noticed that habits like coordination, decision making, and accountability are compounded with larger teams and result in more spectacular wins and fails. This compounding effect coupled with variable group size creates a large spread of difficulty levels that we have to account for. It was a fun design exercise to incorporate dynamic content and timing into the game so it can adapt to different group types.

GD: If the first “game” was working so well, why bother building a second game?

MC:In order to transform Reason from a project into a company, we needed to prove to ourselves that we were not a one-hit-wonder. Building the second game meant standardizing our design language, code library, manufacturing process and ultimately game mechanics and player UI.

It also gave us a chance to incorporate a lot of the user feedback from the first game as well as learnings from our own future tech experiments. All of this translated into bigger props, more multiplayer installations, and a more streamlined technology discovery experience. The Crash Site build process really helped us define our voice as designers and reaffirmed our love for science fiction.

MC: Gritty is good! So is getting your hands dirty, failing fast, being agile, etc. It all boils down to a team’s ability to experiment with new things and adapt to foreign environments. We see cross-functional teams and project teams usually perform well as opposed to say, functional teams who work on different projects.

To give an example, our best records for Reactor and Crash Site are held by a dev-ops team from Optimizely and a deployment team from Palantir. We’ve tried hosting pick-up games with strangers before but learned pretty quickly that strong collaborative games have a steep learning curve for a group of strangers. If you want to crush it at Reason, assembling a team that you are comfortable working with is half the battle.

GD: Inquiring minds want to know: Are we at peak escape room?

MC: Escape rooms are more popular now compared to when we first started in 2016. It’s nice not having to explain what’s an escape room at dinner parties anymore and they’ve sort of become a staple for team building activities. From an industry perspective, big firms, brands, and franchises are pumping capital into the industry and we are seeing consolidation happening in the long tail.

We feel this is a positive trend resulting in increased production value and elevated consumer experience in the near term; while having the potential to drive continued innovation and specialization in the long term. For us, working at the intersection of immersive entertainment and emerging technology is exciting, and we love being the pioneers of this nascent medium. We can’t wait to share with you what we are cooking up next!