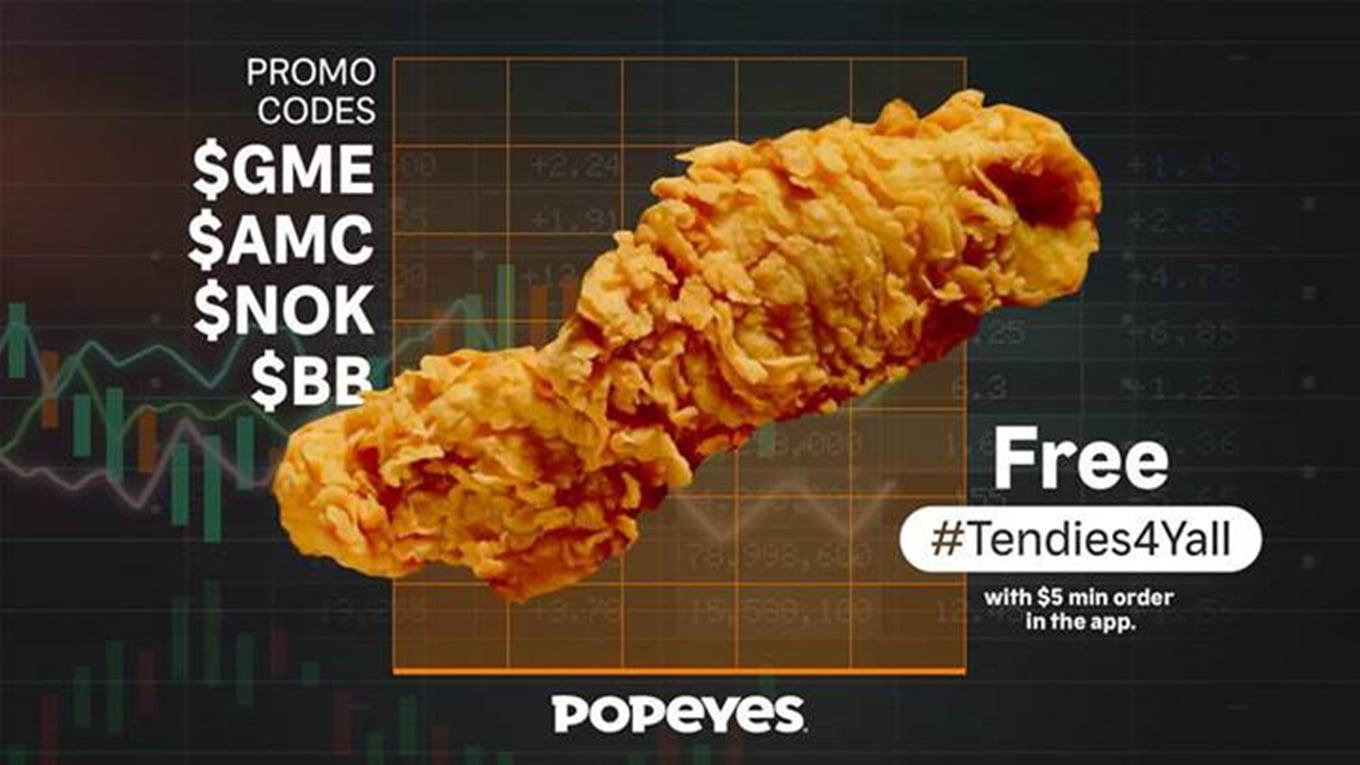 Popeyes is the latest brand to hop on the GameStop short squeeze bandwagon. The company, in solidarity with retail traders participating in a short squeeze on several popular stocks, is offering a promotion for free chicken tenders—also called ‘tendies’ which refers to gains in the stock market on the popular Reddit group that launched the squeeze.

Popeye’s revealed the promotion in a YouTube video on Monday, saying that “Tendies aren’t for the elite few, they’re for everyone.” The fifteen second video shows chicken tenders flying across the screen over a stock market ticker. It’s a clever way to cash out on one of the most viral memes of 2021 thus far, and will likely spark conversation about the company on social media.

Reddit users in a popular Subreddit called r/WallStreetBets began purchasing shares in GameStop, AMC Theaters, BlackBerry and Nokia after noticing that hedge funds like Melvin Capital were shorting the stocks to drive the price down, making millions of dollars by gambling that the companies would go bankrupt. Feeling vengeful after the 2008 stock market crash bankrupted many of their parents, Millennial and Gen Z Reddit users went for blood—by buying up all of the shorted stock to force the hedge funds to pay for their mistakes.

The plan worked and sent all four of the stocks soaring, but when retail trading apps like Robinhood cut off access to purchasing shares in the companies, the stocks tanked. Many users are still holding out for a possible short squeeze, though, and refer to potential gains as ‘tendies’ on the app.

Customers can redeem the Popeyes promotion by ordering on the app through Tuesday. When you’re in the app, just click on the ‘tendies’ icon and it will take you to a page that will let you redeem a coupon code for free chicken tenders if you spend $5 or more. The code for the free chicken tenders is any one of the four stocks that have been trending in the last week, such as $GME, $AMC, $BB or $NOK.