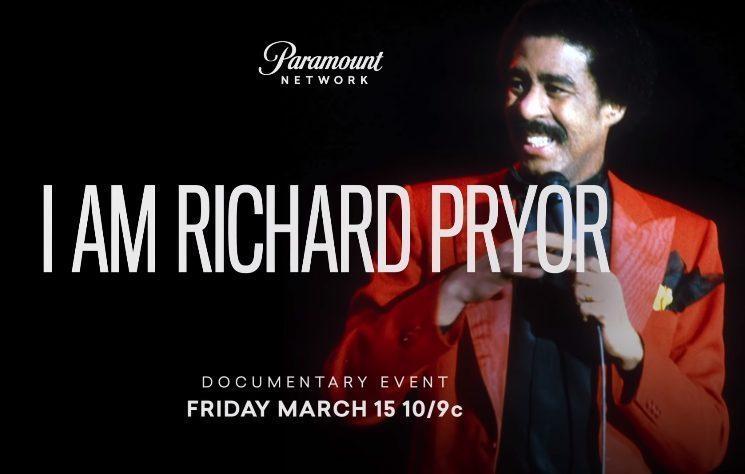 Paramount Network Announces Release of “I Am: Richard Pryor” Documentary at SXSW

From his first comedy album until his death from a heart attack in 2005, the revolutionary stand-up comedian, Richard Pryor, dispensed what critics regarded as the most poignant and penetrating comedic view of African-American life ever afforded to the U.S. at large.

Yet, here we are at SXSW in 2019 where his voice still carries into the art and culture, we so desperately grab hold to.

This Friday, Paramount Network is debuting the world premiere of its latest addition to its “I Am” documentary series, with “I Am: Richard Pryor,” which explores and celebrates the life of the acclaimed and iconic comedian who lifted himself out of poverty to achieve worldwide success.

Having seen an advanced screener of the film, I was blown away by the history and culture that somehow has been lost in time.

I was able to speak with Jennifer Pryor, widow to Richard Pryor, ahead of its release whom is also featured in the documentary about the inspiration and everlasting effect in which her late-husband brought to the world.

Andrew Rossow: How would you describe your experience with this announcement and release so far at SXSW?

Jennifer Pryor: I feel very good about it. Overall, the film was a success and the panel I was on was delightful.

AR: How would you describe the film, “I Am Richard Pryor?”

JP: It’s a wonderful film because it addresses Richard’s artistry and the darkness as well—but specifically, the darkness and eclipse. It outlines the true genius of his journey, and how he found his true comedy, ultimately depicting where he landed with that comedy.

It talks about the evolution of him as an artist, which I’m very thrilled about. As you know, he left Vegas doing “white comedy” and ended up in Berkeley where he really found his voice. All of a sudden, he just busted out and started doing things that mattered to him, such as addressing racist-America. Dick Gregory said, ‘Richard Pryor performed brain surgery on America,’ and I think this film shows that beautifully.

Celebrating the Life of Richard Pryor

In a time where we as a country seem more disconnected than ever, I Am Richard Pryor director, Jesse James Miller, brings Pryor’s life back from the beyond, re-emphasizing the ever-growing need to love and appreciate one another, as you never truly know what someone goes through until you walk two moons in their shoes.

AR: SXSW is a festival where works of art similar to this are brought to light. What was the inspiration in the film’s release this year?

JP: I think now more than ever, America needs to hear his voice. We are living in a climate of hate, where hate crimes are on the rise, we are seeing the rise of white supremacy and anti-Semitism, racism, bigotry, xenophobia, homophobia, misogyny—it’s really a bad time in America right now, and we need Richard’s voice more than ever. We need to have a discussion and a new civil rights movement to fight against this […] we have a new generation of racists, […] and Richard is a voice who will speak on [behalf of those victimized.]

AR: During the film’s production, what was your favorite part, either in your role or observation?

JP: I really loved the part with Richard leaving Vegas and going to Berkeley and finding his voice. To me, that is the pivotal moment in his life—a beautiful moment, where he decides he’s not going to fit into white culture anymore, white-America. Instead, he’s going to find his own voice and become empowered. And that is incredible. He goes to Berkeley and is exposed to the Black Panthers, black intellectuals, readers, writers, and thinker—developing from that, his own voice and sense of self. He busts out of that, in a way that has given us his genius as we know Richard Pryor today.

Reaching the Generation of Tomorrow—Millennials

Volatile yet vulnerable, crass but sensitive, streetwise and cocky, Pryor did not simply tell stories—he brought them to life and was considered a trailblazer for generations of comics to come. The documentary explores his unusually personal art that was a window into an extremely vulnerable soul, as well as his endless struggle to extend dignity and equality to all.

AR: Speaking to you as a millennial, what do you envision for us and those in attendance right now at SXSW to take away from this film?

JP: That people will learn to have courage to tell the truth, to fight against wrong when they see it, to never shy away from telling that truth, and to be brave. To want what’s right and good, and to have some guts. If you’re an artist, create art in a brave way with no net and fearlessness. To be a good human being and to listen to those who have shit to say, and to find out what your message is. And whatever that message is, say it loud and proud.

Published in News and SXSW