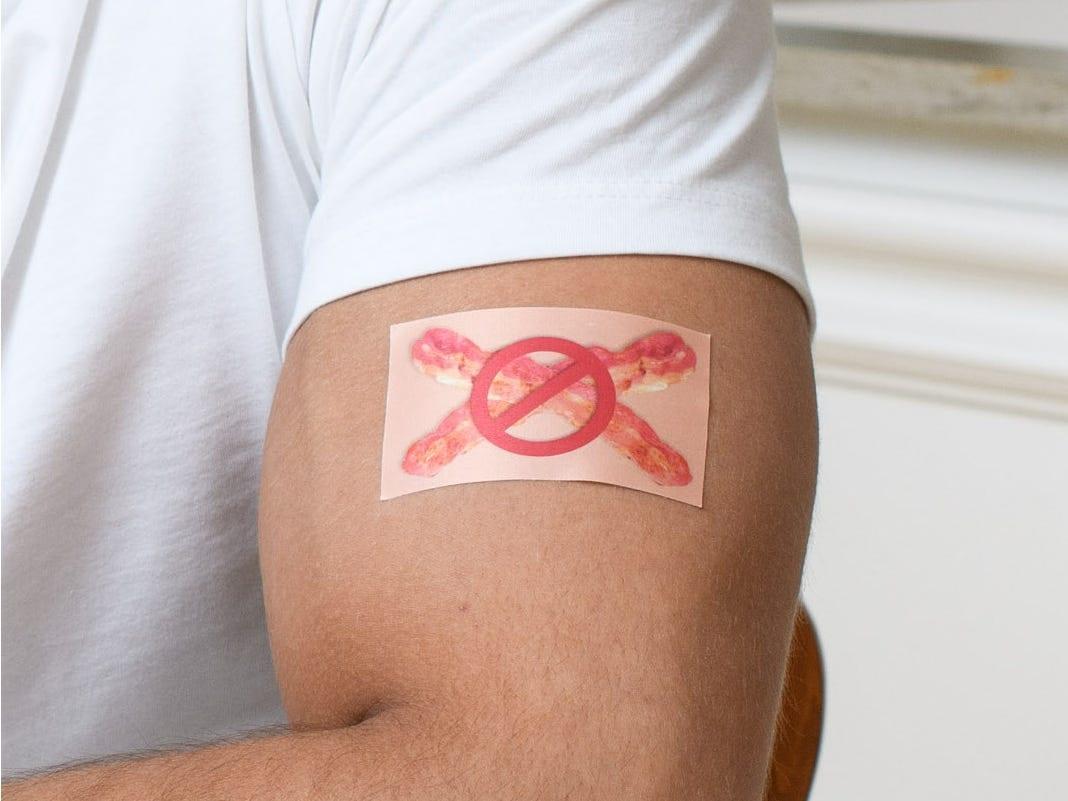 Once in a while, you will turn on your tv to find commercials advertising nicotine patches for smokers who are trying to quit. Typically, these commercials show people placing the sticky substance onto their arm as nicotine replacement therapy. Recently, a new product has released something similar, but it’s not something you see advertised on the regular. That’s where the meat patch comes in.

Have you ever heard of a scratch-and-sniff meat patch? No? Well, here’s your chance to luck out and fight those urges to eat meat while sticking to your vegetarian diet. Strong Roots is an Irish vegetarian food company that has just changed the game with its meat patch that is supposed to hinder those bacon cravings.

Strong Roots has come together with an Oxford professor to help create this patch. Just like a nicotine patch, you would stick it to your arm. Whereas a nicotine patch releases nicotine in the body, these meat patches release the smell of bacon once being scratched off by whoever is wearing the patch.

The patch has yet to be put on shelves or an online shop as it’s currently going through a trial phase. These meat patches will be geared toward people who are interested and want to start a plant-based diet.

Still not convinced? Well, Strong Roots has gone the extra mile and brought in boxer and British reality star Tommy Furry to help promote the patch.

Now, not everyone agrees with what Strong Roots has created. Once Strong Roots posted news of the patch on their social media, the public went on a frenzy with skepticism while others believed it to be a prank the company was pulling. In this case, I agree with the commenters.

The users did not hesitate to hash out their discussion in the comment section of the news post. Most took it to the comment section to mock the company. One commenter wrote, “ridiculous PR stunt” while another asked, “Has April Fools Day come early??!!” One user was not having it with this news of this patch and wrote:

“Are you sh*tting me? Marketing executives will stoop to the lowest levels of sociopathic human behavior in an effort to defraud and deceive any naive soul out their hard-earned money. Everything in the photo ad is a complete lie.”

I mean, I don’t think anyone should go that far with the response on this patch, but I do believe this may be a stretch. If I’m out with friends or running some errands while not being hungry at all, but then end up smelling something delicious, I’m 100% going to crave it. Therefore, I think the logic behind the patch is backward. If someone would scratch off this patch and it smelt like bacon, I’m pretty sure they would want bacon, right? That’s like going into Bath and Body Works and spraying a sweet-smelling perfume and wanting to buy it.

In all honesty, I think the company had a good thought process behind the idea since they are a vegetarian company and they want people to live a better and healthier lifestyle. It may be hard, but I don’t think a meat patch is the right way to start this healthy lifestyle.

Jori Ayers
Jori Ayers is a Staff Writer at Grit Daily based in Tampa, Florida. She was formerly with the editorial team at Tampa Bay Parenting Magazine.
More from NewsMore posts in News »