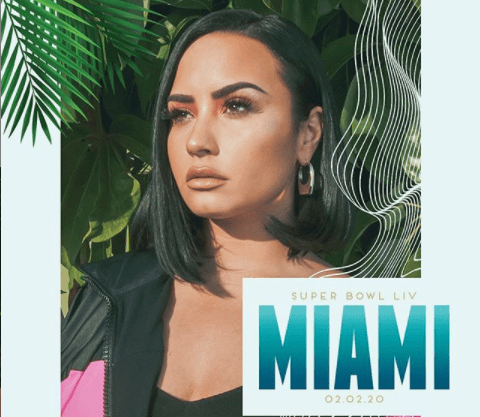 Since 2008, women have dominated the National Anthem performances at the Super Bowl (minus Luke Bryan back in 2017), and it’s a streak we thankfully continue to see. Today, singer and songwriter Demi Lovato continues her 2020 comeback as she announced Thursday that she will be in the end-zone performing the National Anthem at Super Bowl LIV on February 2.

“See you in Miami,” Lovato posted to her Instagram on Thursday.

The Return of Demi

Lovato joins singers Jennifer Lopez and Shakira, who will have a joint performance during Super Bowl LIV’s halftime show. She follows in the footsteps of artists such as Beyoncé, Whitney Houston, Gladys Knight and Pink.

Lovato not only made a return to the music world, but also to television. Earlier this month, she began her appearance on Will & Grace as Will’s surrogate mother after teasing fans about her role in November.

Women, the National Anthem, and the Super Bowl

As stated above, Lovato joins Beyoncé, Whitney Houston and a long line of female performers who have sung the National Anthem at the Super Bowl. Last year, Gladys Knight performed a soulful rendition of the anthem. Singer Pink, who still performed in 2018, continued to do so while she battled the flu.

The Long Road of Sobriety

It’s been a road of recovery for Lovato. In her latest track, ‘Sober,’ Lovato revealed her June 2018 relapse, shortly after celebrating six years of sobriety that March. In July of that year, she was hospitalized following an apparent drug overdose. She has since stayed out of the public eye, focusing on maintaining her sobriety.

In an interview with Teen Vogue, Lovato expressed how important it is to learn to love and accept yourself.

“Over the past five years I’ve learned life is not worth living unless you’re living for yourself. If you’re trying to be someone you’re not, or you’re trying to please other people, it’s not going to work out in the long run. If you want to dye your hair purple, dye your hair purple. If you want to love someone of the same sex, love someone of the same sex. Be yourself and don’t be afraid of what people think.”

New decade, new Demi. The universe seems to have great things in store for her this year.