Art has been used as pedagogy for religion, realizing fantasies, and embodying emotions and desires, including science, some of which might not yet exist beyond the imagination. But, art is also, as evidenced by US-based artist Laura Splan, a vehicle for making groundbreaking research and science more tangible to the naked eye.

Multi-media artist Splan has made it her life’s work to enliven and humanize viruses. Using art to illustrate science, “Life Eternal,” co-organized by Nobel Museum and Liljevalchs in Stockholm, will showcase Splan’s lace doilies concerning research made by Nobel prize-winning scientists.

In the documentary “Father of Cyborgs,” a science writer said that he started following the neuroscientist and neurologist Dr. Phil Kennedy when he heard that he had implanted the first electrodes into humans. This groundbreaking research allowed a paralyzed man to — with his mind — communicate through a computer, the stuff of science fiction, according to the writer.  The documentary makes this research more understandable through graphs, interviews, and, most importantly, comparisons to art and other media.

As the SARs virus broke out in 2002 in China, idealized images of the radial virus spread worldwide through news broadcasts and magazines. To help people understand it, Splan created a series of lace doilies in the shape of SARs and several other viruses that are often misconstrued but widespread in public: HIV, Influenza, and Herpes. A lace doily is a crocheted or lace ornamental mat traditionally used in food service presentation or to protect surfaces. Somewhat outdated, your grandmother or great-grandmother might have had a doily in their home. Pioneering feminist artist Miriam Schapiro used lace doilies in her ‘femmages,’ collaged work. Thus raising the status of the female-coded object in the art world. By re-creating viruses as doilies, Splan brings attention to their existence in the domestic environment and beauty. However, using this form of decor alludes to a looming presence of out-of-dateness.

As the history of neuroscience shows, Lobotomies have become outdated in the medical field. But not before the frontal lobe surgery intended to treat psychiatric disorders left thousands of, mostly women but also men, with severely impaired intellects and bodily functions.

The Portuguese neurologist António Egas Moniz won the Nobel Prize in 1949 for originating the procedure. A year later, however, the use of the treatment dramatically decreased and was soon entirely abandoned. Cinematic and literary depictions of the ills of the procedure allowed popular sentiment against lobotomies to take hold properly in public. Moreover, with COVID, the SARS-COV-2 virus, the speed at which new research emerged created outdated research on a monthly, and sometimes weekly basis.

Splan’s work is of interest to those working in the scientific field. She  undertook undergraduate studies in biology and taught interdisciplinary courses including “Art & Biology” at Stanford University. The Centers for Disease Control Foundation have commissioned her to create biomedical-themed artworks and her works are collected by the Thoma Art Foundation, The Chan Zuckerberg Initiative, and the NYU Langone Art Collection. Currently, she is collaborating with theoretical biophysicist Adam Lamson to create a series of new artworks and is a NEW INC Artist-in-Residence at EY where she is collaborating with the Cognitive Human Enterprise on research exploring the implications of virtual technologies.

During the most recent lockdown, engaging with our romanticized notions of the microbial world, Splan collaborated with scientists at Integral Molecular on antibody discovery. Most of the images we see of the SARS-COV-2 virus are in color. However, Splan explains that the virus, in actuality, is colorless as it is smaller than visible wavelengths. On view at CC De Ververij Ronse in Belgium, “Unraveling (Marine/Aquamarine/Skyblue)” (2020) are kaleidoscopic digital animations created with the same molecular visualization software (Pymol) used by the lab and SARS virus models. Through the works, Splan brings the software design paradigms to her audiences’ attention.

Most importantly, Splan creates a bridge to understanding science. Her work connects audiences to the materiality of the microbial world, doing the vital work of debunking myths and laying the foundation for critical perspectives in a format digestible for a layman. 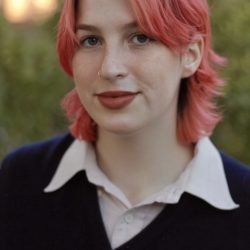 Nina Potischman is a writer based in New York covering contemporary art and culture. She writes both fiction and cross-genre work focusing on the body, autoimmune illness, and disability. Nina also runs Queerings, a jewelry business focused on LGBTQ+ culture. She holds a BA in English Literature from Pomona College and will pursue an MA in English Literature from the University of Exeter in the fall of 2022.