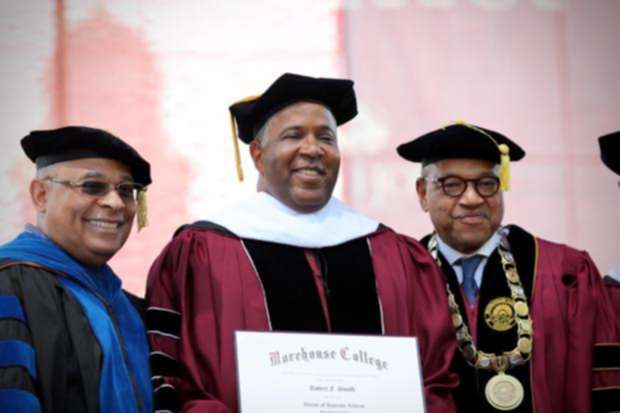 The 2019 graduating class of Morehouse College got a special announcement during the commencement ceremony this year. A speech from CEO billionaire Robert F. Smith had been scheduled to take place at the event, but the graduating students didn’t expect it to bring such good news. Smith took the opportunity to announce that he and his family plan to set up a fund to pay off every last cent of student debt that the graduating class is left with after graduation. For the historically black college, this represents tens of millions of dollars.

Students at Morehouse College have expressed extreme gratitude over the gesture, as many of them have taken up significant amounts of debt in order to get more education. The historically black college is located in Atlanta, Georgia, and is one of the oldest all men’s colleges in the United States. Established in 1867, Morehouse is one of the leading men’s liberal arts colleges in the country. With alumni like Martin Luther King Jr., the historically black college has seen dozens of civil rights leaders and activists come and go from its doors.

Throughout its rich history as one of the most famous Historically Black Colleges and Universities (HBCU) in the country, Morehouse has graduated thousands of students that have gone on to make a great impact in their respective industries. Among some of the notable alumni are figures like Spike Lee, Samuel L. Jackson, Walter E. Massey, and Herman Cain, to name a few. The university touts itself as the first HBCU to create a Rhodes Scholar, and is home to 11 Fulbright Scholars throughout its more than 100-year history.

When Robert F. Smith received his honorary doctorate from Morehouse (which puts him alongside figures like Barack Obama and Jimmy Carter) he wanted to leave the 2019 graduates with more than just the memory of a good speech. Smith announced during the commencement ceremony that he and his family would be creating a fund to forgive all of the student debt procured among the 2019 graduates. The fund would cover all student debt equally, up to $40 million dollars. For the 396 students graduating from Morehouse in 2019, this donation would mean setting them up with an even brighter future than they could have imagined.

Smith is the founder and CEO of the private equity firm, Vista Equity Partners, which is located in Austin, Texas. Smith also considers himself a philanthropist and has worked with companies like Apple, Texas Instruments, Kraft, and Microsoft. Among his philanthropic endeavors, Smith has donated millions of dollars to countless organizations and is involved in dozens of charities, organizations, and foundations. Some of which include The Boys & Girls Clubs of America, City of Hope, the Prostate Cancer Foundation, and Carnegie Hall. The latter of which, Smith became the first African American to become the board chairman of the organization.

“On behalf of the eight generations of my family who have been in this country, we’re going to put a little fuel in your bus,” said Smith of the donation to the Morehouse students. “I want my class to look at these (alumni) — these beautiful Morehouse brothers — and let’s make sure every class has the same opportunity going forward because we are enough to take care of our own community. We are enough to ensure we have all the opportunities of the American dream.” he said.

Smiths donation of $40 million to go toward student debt relief will be filled by 2020.