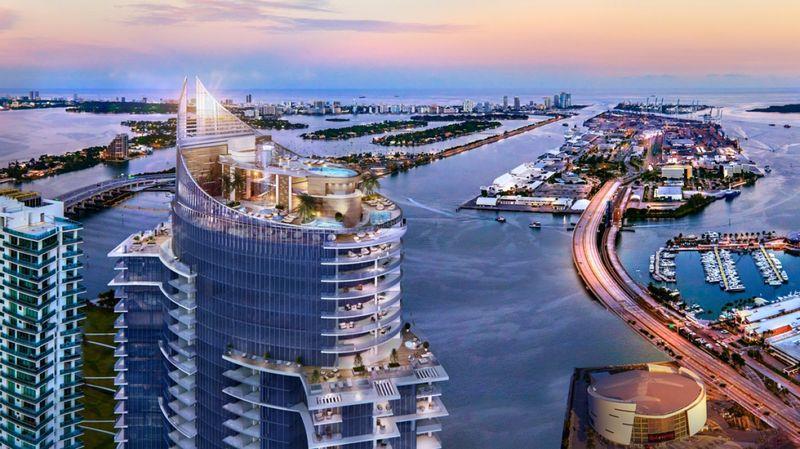 Elon Musk’s brain tech company, Neuralink, announced earlier this month that it hopes to create tiny chips that can be implanted into human brains that will let us control technology with our minds. It’s been fifty years since the moon landing in 1969. Electric cars are more accessible than ever, with driver-less car technology getting more advanced each day. Our packages could soon be delivered by drones. Now, one of the United States’ major cities is getting a flashy new piece of tech: a port for flying cars.

It’s Not A Helicopter Pad

With traffic problems in our major cities only getting worse, engineers are looking toward the skies to find solutions that can help diminish the amount of cars on the roads. A developer in Miami is creating a new luxury building with the future in mind. On top of the new Paramount Miami Worldcenter, a luxury condo tower slated for opening in 2019, a landing port for the world’s future flying cars will signal the first of its kind. While we’re far from a reality where flying cars litter the skies, developer Dan Kodsi wants to stay ahead of the competition.

Companies like Uber and Bell Helicopter are among a few that are reportedly developing the technology to help make flying cars a reality sooner than we think. Uber revealed at an event called Elevate Summit in 2018—an event specifically for the development of flying cars—that the technology is on the horizon. The company also revealed what a potential flying car would look like, as well as how they would operate. Since Uber has plans for them to be electric, this means that the installment of charging ports must happen before the cars take flight sometime in the future.

Uber predicts that flying cars could become a widely commercialized form of transportation within the next five to ten years. At the Elevate Summit, the company revealed that the technology would look similar to a drone, with propellers on the bottom and the vehicles cabin sitting on top. Uber plans to use the flying cars as a means of taxi transportation—first among the elite, then available at a lower price. Fortune highlighted what Uber says the technology will look like within the next decade. Officially, they’re called Vertical Take-off and Landing vehicles (VOTL, or eVOTL).

For the Paramount Miami Worldcenter building, the SkyPort would sit atop the luxury condominium building. Prices for condos in the building range from $750,000 to $10 million, making the average price of real estate in the building around $720-$1000/sq.ft. The tower will feature 60 stories of real estate, amassing to around 540 units with amenities like tennis courts, a spa, an elevated soccer field, a nightclub, basketball and squash courts, jogging paths, a conservatory, and the nation’s largest urban amenities deck. The building is estimated to be ready for occupancy later this year.