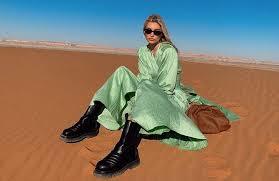 The backlash kicked off when the popular Instagram account Diet Prada posted a statement harshly criticizing various celebrities for “cashing big fat checks in exchange for #content creation (aka propaganda) to rehabilitate the image of Saudi Arabia.” Fans and commentators, as well as the media, very quickly picked up on the story.

Why is Saudi Arabia in the Spotlight?

The image of Saudi Arabia is significantly tarnished in the west after a series of human rights abuses, most notably the murder of The Washington Post journalist Jamal Khashoggi in October 2018. There have also been high-profile incidents involving women’s rights and the LGBT+ community.

The celebrities promoting this festival are facing such harsh criticism because they are seemingly supporting Saudi Arabia and it’s image despite these serious offenses against women, the LGBT+ community, and freedom of speech and expression.

Social media “influencers,” including Sofia Richie, Scott Disick, Irina Shayk, and many others, were reportedly offered up to six figures to attend and promote the MDL Beast festival. Sound familiar? Fyre Festival…cough cough.

Richie even posted pictures from the Riyadh Ritz-Carlton, where Crown Prince Muhammad bin Salman detained hundreds of businessmen and prominent officials in an attempt to solidify his authority.

However, not all social media influencers out there considered the payout to be worth it.

Emily Ratajkowski, a model who chose not to participate in the promotion of the festival, shared her two cents with Diet Prada:

“It is very important to me to make clear my support for the rights of women, the LGBTQ community, freedom of expression and the right to a free press. I hope coming forward on this brings more attention to the injustices happening there.”

Some have compared this controversy to the 2017 Fyre Festival scandal, again calling into question the trust social media “influencers” receive in society. While the MDL Beast Festival wasn’t a scam, it was seemingly part of a questionable PR campaign using online “influencer” clout to make people in the west forget about all the human rights violations and rethink what Saudi Arabia is really like. It doesn’t appear to have worked.