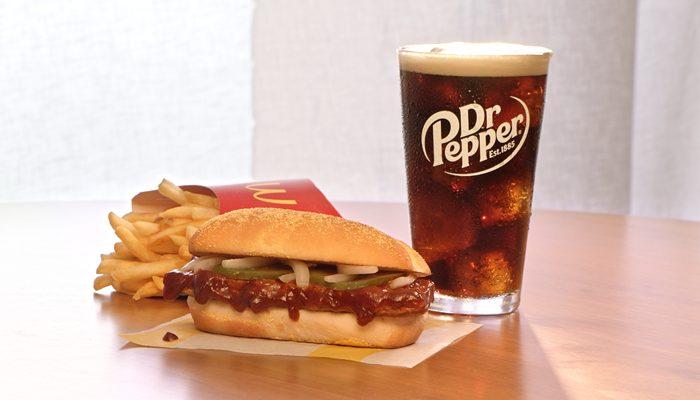 It’s the Sauciest Time of the Year for McRib Fans…Or Is It?

The craveable and delicious sandwich – a seasoned boneless pork slathered in tangy barbecue sauce and topped with slivered onions and tart pickles – is set to return for a limited time in more than 10,000 U.S. restaurants as early as Monday, Oct. 7.

The McRib’s spot on McDonald’s menu dates back to 1981. Originally developed by McDonald’s first Executive Chef Rene Arend, a native from Luxembourg, who invented Chicken McNuggets in 1979, the McRib has always been a limited-time item, as a result of poor sales. For this reason, it was removed from the menu in 1985, generally being reintroduced for a short time each year in select McDonald’s locations.

The iconic sandwich last appeared in participating restaurants in November 2018.

“We’re always listening to our customers and we know the McRib has some of the most loyal fans,” said Chef Chad Schafer, Senior Director of Culinary Innovation & Commercialization at McDonald’s USA.

“This year we’re excited to give every McRib fan new ways to show their love for the sandwich with our saucy McRib GIFS so they can celebrate the season no matter where they live.”

Do You Crave the BBQ?

With the GIF stickers, McRib lovers can make their Instagram stories sing with seasonal cheer using options that say “Tis the SZN” or “SZN greetings” or one that shows a McRib made to look like a caramel apple.

Personally, I have never been a huge fan of the McRib—whether it’s the sauce or the meat, I’m not entirely sure. Over the years, the process of restructuring the meat was first developed by the US Army as a means to develop low cost meat products to our U.S. Military in the field. Despite its name, however, it’s primarily composed of pork shoulder meat, according to McDonald’s.

However, I chose to bite into it again, hoping to feel differently, adding a cold Dr. Pepper to the meal.

Unfortunately, nothing has changed on my end—I guess that’s the Texan in me—having taste buds suited for another style of barbecue.

We are curious on your thoughts and why you are/are not a fan of the McRib.

To locate the closest participating restaurant, customers can enter their zip code at mcdfinder.com.

Published in Brands, Food and News