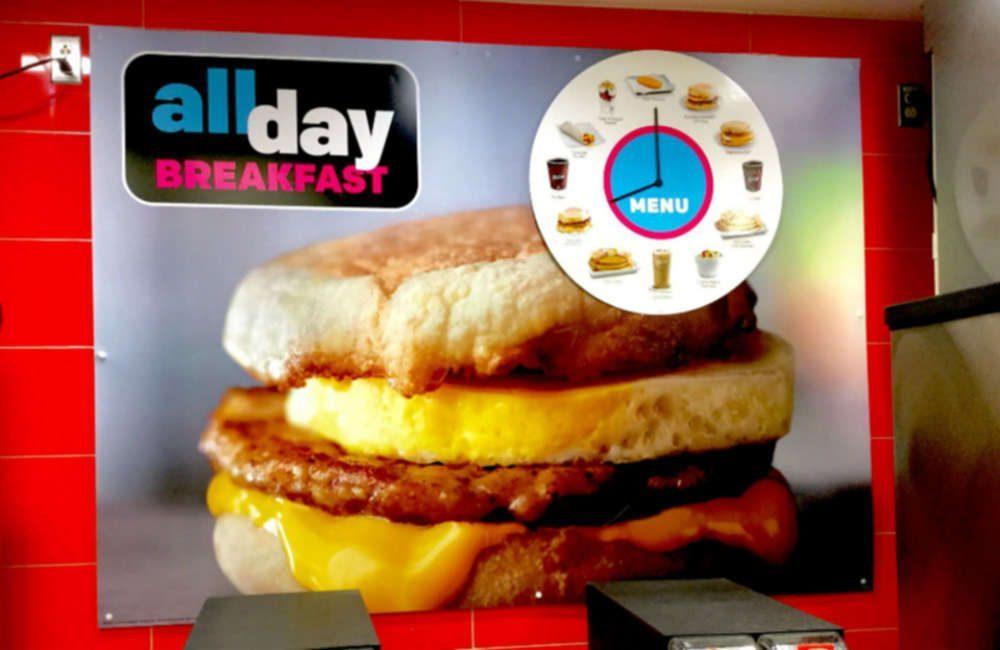 McDonald’s announced Tuesday that its All Day Breakfast menu options will be undergoing some major changes.

So, if you are a Grit Daily reader who loves having breakfast for dinner, you’d better brace for impact. The upcoming changes shrink the menu.

However, the fast-food mogul quickly assured its patrons that the changes won’t phase out the popular All Day Breakfast. The Oak Brook, Illinois-based restaurant went on to say that minimizing the menu to include only its best-selling breakfast items will likely become their primary focus.

McDonald’s Franchisees Will Choose What Stays

McDonald’s pointed out that this effort gives these franchisees the ability to select the items they serve through their All Day Breakfast menus. For instance, markets where McMuffins sold the most, would focus on these breakfast sandwiches during All Day Breakfast.

McDonald’s went on to explain:

McDonald’s won’t be able to pinpoint exactly which items will be leaving at this time because the changes are dependent on the individual markets. Simplicity prompted this change in direction for the golden arches. McDonald’s said that the move would make for “an even better, faster experience for customers.”

The move makes a lot of sense if you think about it. Fewer McDonald’s breakfast menu items reduce complexities for workers. Every second counts when customers order, and a more crowded choice on menu boards means longer order times in queues. Customers perusing more choices potentially lengthen service times, resulting in even longer wait times. This aspect of the business frustrates customers.

McDonald’s is the world’s leading global food service retailer for many reasons, especially when it comes to speed of service. A slow-down in service could spell catastrophe to them. Therefore, streamlined menus give the Big Mac-maker a competitive edge.  Meanwhile, other fast-food titans like Burger King, Wendy’s, and Taco Bell could step in and vie for the top spot on the heap if this type of misstep isn’t managed.

The iconic All Day Breakfast, that included items such as hash browns, Egg McMuffins, and Sausage McGriddles, started in 2005. The offering led to an increase in sales in the United States. The menu soon expanded to include offerings like breakfast burritos and fruit and maple-topped oatmeal. Unfortunately, other restaurants started offering similar all-day breakfast menu choices. The result ended up diluting McDonald’s sales.

Steve Easterbrook, McDonald’s CEO,  lamented to investors about the competition and subsequent downturn in April, saying: “There are more and more people offering breakfast.”

The fast-food giant made changes to other items recently in a bid to bring a better and faster customer service experience. Case in point, McDonald’s pared down popular items from its late-night menus such as Filet-O-Fish, buttermilk-crispy-chicken sandwiches, buttermilk crispy tenders, artisan-grilled chicken sandwiches, and salads.

McDonald’s also said goodbye to their signature crafted sandwiches last month, which included toppings like guacamole, sweet BBQ bacon, and maple bacon dijon. The sandwiches helped spark a bigger competition with Shake Shack and Wendy’s, but they came at too high of a cost. Preparing them additionally slowed down service lines in the store’s dining rooms and drive-thrus.

The news coming out of McDonald’s isn’t all bad. In fact, some of the menu items cut are making way for what sounds like tasty new options. In June, Stroopwafel McFlurries, the Grand McExtreme Bacon Burger, Cheesy Bacon Fries, and the Tomato Mozzarella Chicken Sandwich will debut at a Mickey D’s near you.