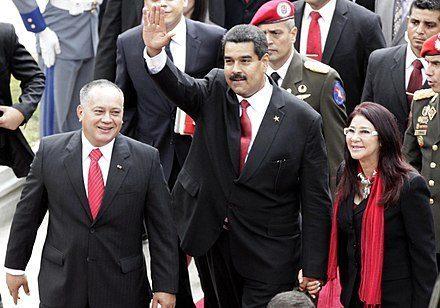 In an unprecedented announcement made on Thursday, the United States State Department and Drug Enforcement Administration (DEA) charged President Nicolás Maduro with drug trafficking. The ongoing investigation alleges that Maduro, in addition to his duties as the leader of the South American nation, led a drug cartel on the side that brought cocaine into the United States from Venezuela.

The United States has made it clear that it no longer recognizes Maduro as Venezuela’s President, especially after the opposition leader Juan Guaidó announced that he would overtake the position of power in January 2019. Maduro refused to step down though, leaving the country in a state of political volatility with two men claiming leadership over the nation. Guaidó has managed to effectively win over nations like Colombia and the United States, who each recognize his leadership over Venezuela as of now.

Maduro, on the other hand, has ties to ISIS-linked Hezbollah and other Syrian officials. The revelation of which effectively fueled distrust in Maduro as part of an ongoing propaganda war around the world. As Maduro’s reign crumbled before him, global leaders around the world leaped at the opportunity to use his leftist values as an example of socialism gone wrong.

Nevertheless, the Venezuelan people remained the ultimate victims in the end, facing starvation and retaliation from their government in the face of opposition. All the while, the international cocaine trade fueled the ongoing, violent war against the people as government officials used cartel money to pay for things like weapons.

The cartel, widely referred to as “The Cartel of the Suns” has close ties to Colombia’s Revolutionary Armed Forces (FARC) a guerrilla warfare group that dates back to the 1960’s. Under Maduro, border control agencies have allegedly granted immunity to drug traffickers, as the international drug trade to the United States actively funds the guerrilla groups, among other things.

Maduro’s shaky history as a political leader was once welcomed by Venezuela’s people as a union leader that slowly became the successor to Hugo Chavez.

Maduro’s time in office, which began in 2013 and was reinstated upon his re-election in 2018, has long made international headlines for the mass unrest and civil disobedience over the political corruption in the country. In addition to Maduro, several other leaders in Venezuelan intelligence were charged alongside the President in connection with a drug cartel that allegedly trafficked cocaine into the United States from South America.

While the charges against the disgraced President come as a surprise to many, its reasoning may not. Maduro’s longstanding connection to the drug trade can be traced back to the days of Hugo Chavez, when the Cartel of the Suns worked to bring cocaine into the United States through Venezuela from Colombia.

Venezuela’s longstanding conflicts reached an all time high back in May 2019.

Just last spring, videos of armed National Guard vehicles plowing over anti-government protestors in the capital city of Caracas sparked global unrest toward the corrupt leader’s place in power. However, longstanding allegations that Maduro and his family have stolen money from the Venezuelan government to fund their own personal wealth since taking office after Chavez’ death in 2013.

Maduro responded to the allegations and charges made against him on Twitter, where he defended his name and denounced the claims, pledging to “defend the peace and stability of the entire homeland” in response. The United States has not said whether or not it will seek to extradite Maduro on the charges made against him. It is, however, offering $15 million in reward for any information that could lead to his inevitable arrest. Maduro faces charges of drug trafficking and narco-terrorism, along with nearly a dozen other Venezuelan intelligence officials.