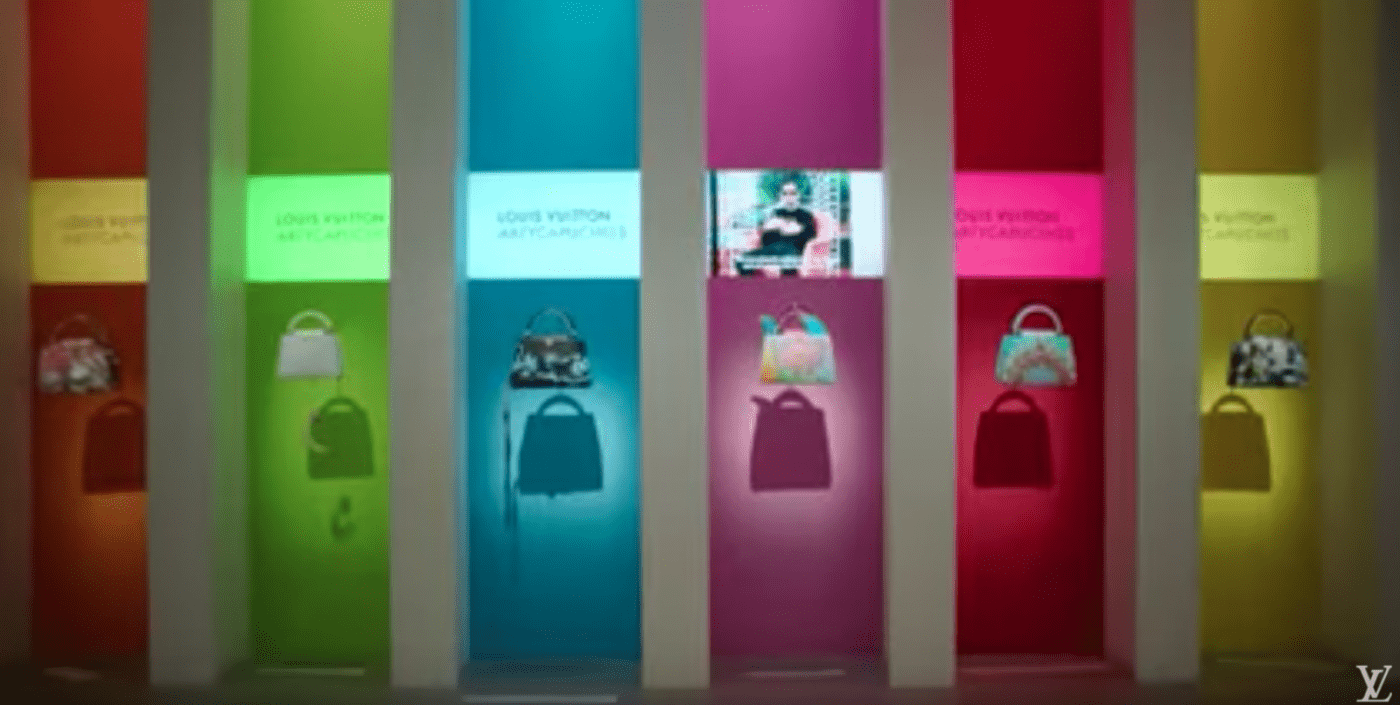 LVMH recently opened a Louis Vuitton X exhibit in Beverly Hills, which is open to the public until September 15. The free exhibit commemorates the 160th anniversary of the fashion house.

There are ten digitally-focused rooms that are filled with 180 classic items. Visitors can see some of Louis Vuitton’s most iconic collaborations, where its famously unique items had been imagined by the likes of Rei Kawakubo, Cindy Sherman, Frank Gehry, and Karl Lagerfield.

According to press materials, a trip through the exhibit is “an immersive journey through the house’s creative exchanges and artistic collaborations.” The outside is a can’t-miss sight: neon pink and orange decals and palm trees make this a luxury (and very Instagrammable) experience.

You can also see newer collaborations and collections, such as their newest collection, “ArtyCapucines”. Artists such as Alex Israel, Sam Falls, Tschabalala Self, Jonas Wood, Urs Fischer, and Nicholas Hlobo used Capucines bags as canvases. The results are interesting and beautiful creations.

The space also includes a pop-up shop, curated by Colette’s Sarah Andelman, where visitors can pick up their own Capucines bag in an array of sizes and designs.

Actress Alicia Vikander said in an interview that LV exclusively shared with InStyle, that the ArtyCapucines display especially caught her eye.

LVMH has also recently taken Rihanna’s fashion brand, Fenty, as a subsidiary. This makes Fenty the first black-owned LVMH brand. It is also the first time LVMH launched a fashion brand from scratch since Christian Lacroix in 1987.

The fashion house group was first launched by Bernard Arnault who had the idea to create a group of luxury brands. The group also owns other luxury brands such as Dior, Hennessey, Marc Jacobs, Kat Von D Beauty, and Fendi. It holds 66 percent of the drinks division.

“It’s definitely different from doing a show, with a show there are so many moving parts, that’s not to say it hasn’t been hectic, but there is something about the intimacy of doing things this way that I love,” said Rihanna at the intimate press event in Paris in May. Rihanna also shared an Instagram post with the caption “big day for the culture.  thank you Mr.Arnault for believing in this little girl from the left side of an island, and for giving me the opportunity to grow with you at @LVMH . This is proof that nothing is impossible.”

The Fenty label broke a lot of firsts. It is the first fashion brand acquired by LVMH since Christian Lacroix in 1987, the first female-created brand ever, and the first Black woman on top of a Maison… which is about time for the 160-year-old company.

The chairman and CEO of LVMH, Bernard Arnault said, “I discovered a true entrepreneur, a real CEO, and a terrific leader.” Adding, “To support Rihanna to start up the Fenty Maison, we have built a talented and multicultural team supported by the Group resources. I am proud that LVMH is leading this venture and wish it will be a great success.”

The Louis Vuitton X exhibit opened last week to a star-studded party, and will be traveling around the world.