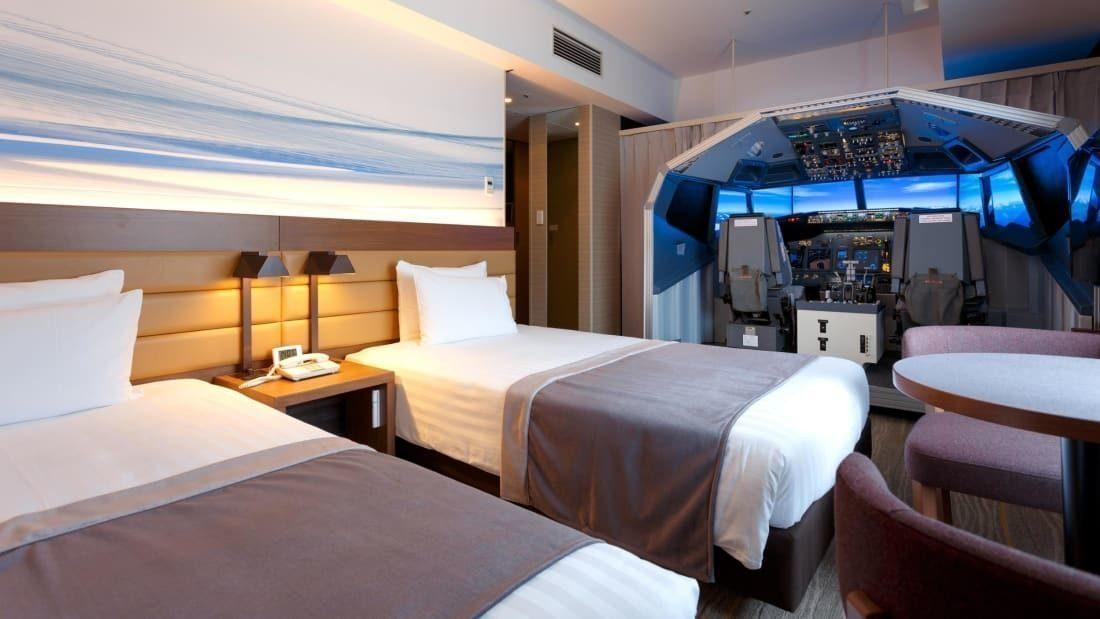 Just in case you miss the feeling of being on the plane even after you’ve landed, one Japanese hotel is the perfect place for you. An airport hotel called the Haneda Excel Hotel Tokyu has installed a full-sized flight simulator in one of its rooms to mimic the experience of being inside the cockpit of a Boeing 737-800. The hotel, which is located within Haneda Airport’s terminal 2, wanted to deliver the full experience of being on a plane in another part of the airport. The “superior cockpit room” comes at a price, though, with an additional fee if you actually want to use the machine.

Themed hotel rooms and restaurants are nothing new to the Japanese hotel experience. In Tokyo alone, dozens of themed restaurants are created on a regular basis to promote anything from popular cartoons and TV shows to owls. In Tokyo’s Akihabara neighborhood, for example, themed cafe’s line the second floors of many anime trinket shops in an effort to promote or celebrate popular anime franchises. The cat cafe, a worldwide trend that lets patrons dine with feline friends, started in Japan to give pet lovers an outlet even if their small apartment spaces prevent them from owning pets of their own. While you may have a cat cafe of your own in your neighborhood, odds are you won’t be able to find anything like what you can in Tokyo. Dog and bunny cafe’s are regular finds, but don’t be surprised to see an owl or even a snake cafe pop up somewhere in the city.

Themed hotels are similar in Tokyo, where companies create eye-catching themed rooms and hotels that draw patrons in from around the world. Though many of these hotels are pay-by-the-hour and are considered love hotels, they’ve become increasingly popular with the rise of social media. Anything from Tokyo Disneyland’s fantastical fairytale rooms to pod and capsule hotels that are themed after literature, millennial-isms, or even run by robots can be found in Tokyo’s hotel market. There’s even a Koala March-themed hotel, you know—for those people that can’t get enough of the Hello Panda-style biscuits (it’s me, hi).

A hotel with its very own cockpit flight simulator was a logical next step for Tokyo’s hotel industry. The Japanese hotel allows guests to rent the room at just over $200 USD equivalent, but piloting the flight simulator is an extra charge (one that brings the bill to nearly double its nightly rate). Guests are not permitted to pilot the simulator on their own, despite the fact that it’s inside the room. The hotel said that installing the simulator cost them nearly $100,000 USD equivalent in yen. Aviation super fans, according to the hotel, have had an overall positive reaction to the arrival of the flight simulator. The hotel felt that adding the flight simulator gave it a different advantage that would help it get noticed among the saturated hotel market located in Tokyo.

Narita is Tokyo’s major international airport, but to spend a night in the Excel Hotel Tokyu, you’ll have to head over to its smaller hub, Haneda.