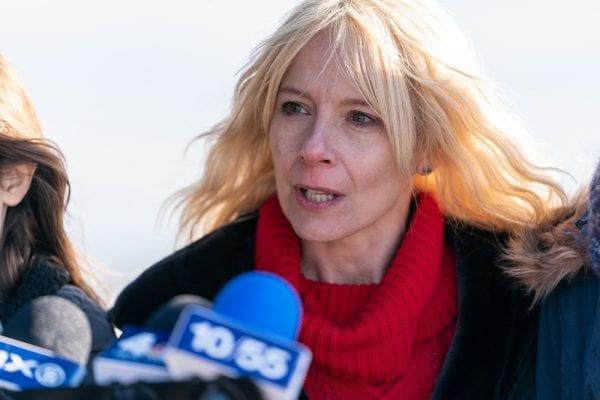 A dramatization of a tragedy that actually happened is, by default, a risky move if you want to avoid turning the story into something reminiscent of a Lifetime biopic. Liz Garbus’ retelling of the murder of Shannan Gilbert, unfortunately, fits into that description all too well in Lost Girls, which premiered at Sundance Film Festival.

The upcoming Netflix drama tells the story of a young woman that goes missing in Long Island in 2010. When her mom Mari (portrayed by Amy Ryan) discovers that she’s gone missing, she does as much as she can to encourage the local police to act with the same sense of urgency that she would like them to.

During their search, police find the bodies of four other women each buried within a specific proximity of one another that were killed in the same way. A search for a serial killer begins, and Mari and her two remaining daughters are left to console their grief with the families of the other victims—each of which were sex workers that had been working in the area when they were murdered.

Years later, the search for Shannan’s killer has still not resulted in more than a couple of suspects. And Mari’s grief has turned to anger as the local police department has proven to be corrupt in the process. In real life, the search for Shannan’s killer is still an ongoing investigation, though one that becomes increasingly hard to solve as the famed Long Island serial killer roams free, we can assume, to this day.

Mari, on the other hand, was murdered by her own daughter Sarra (who is portrayed by Oona Laurence as a young girl in the film), who suffered from a psychotic break in 2016. Tragedy, for the Gilbert family, is an ongoing experience, one that Lost Girls touches on as an example of the Gilbert families resilience and strength despite suffering from such a major tragedy. Today, Sherre Gilbert (who is portrayed as a teenager in the film by Thomasin Mackenzie) remains an activist for the advocacy of sex workers like her sister Shannan, who was murdered in 2010.

Where Lost Girls shines is in its ability to tell a story about the tragic outcome of a group of sex workers without turning the film into a cautionary tale about sex work as a profession. Kim (Lola Kirke), one of the sisters of the victims, is also a sex worker and chooses to go back to working despite her sisters’ gruesome murder.

A scene that features Kim getting into a car with a stranger shows not only that sex workers face an increased level of danger with no real way to protect themselves, but that the film does not seek to vilify its victims or blame them for their own traumas. If anything, the film serves as an outward support for sex workers, as it sends a clear message that violence against sex workers is an evil crime, rather than a side effect of the profession.

Unfortunately, the films good intention is lost in its misguided writing and melodramatic acting. In the film, Mari’s anger toward the police becomes a central theme throughout the story, but with little context into how deeply the corruption within the precinct ran or who Mari was as a character, the anger is lost in scenes that feel more repetitive than powerful.

It is clear that Mari had a tough relationship with her eldest daughter, but the audience is only ever given hints of context to help put the story into perspective in a way that forces empathy on her character rather than confusion. In turn, the story feels more rushed than well-executed as it fails to explore the many nuances that led to Mari and Shannan’s strained relationship. The film purposely leaves Shannan out, but a couple of scenes prior to her disappearance could have done a lot for the overall impact of this specific story.

Sherri, the middle daughter, expresses her anger toward the loss of her sister and confusion toward her mothers actions in scattered, melodramatic scenes where, again, the power is lost in other distractions. McKenzie’s performance, for example, is often lost in the overdone Long Island accent her character was given for the film.

Lost Girls is scheduled for release on March 13, 2020 on Netflix.