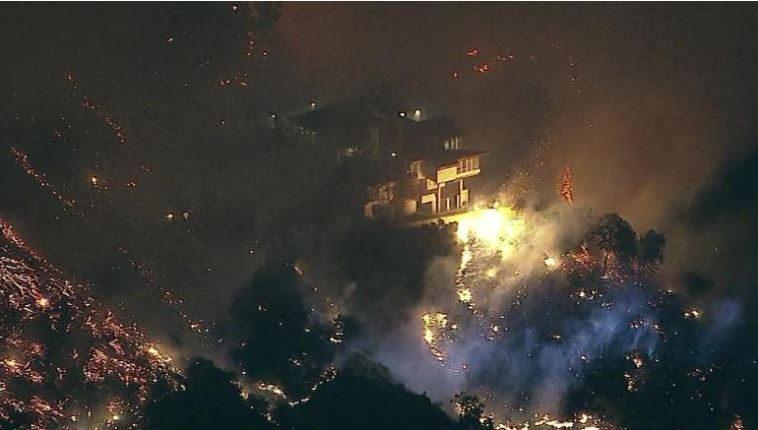 Following the devastating California Getty fires, Lebron James took his Taco Tuesday tradition to the next level on Tuesday—this time for humanitarian efforts. The Los Angeles Lakers superstar sent taco food trucks to the firefighters and first responders working to put an end to the damaging Getty fires in California. The area affected by the Getty Fire is known for its celebrities and high-value homes—with mass evacuations and power outages occurring throughout the state.

As of the date of this article, the Getty Fire has charred over 745 acres since Monday, with only 27% containment, according to the Los Angeles Fire Department. On Tuesday, the National Weather Service issued its first-ever extreme “red flag” warning, which alerts individuals that the nature of the winds, temperatures, and humidity make it extremely ripe for fire danger.

Investigators have determined the preliminary cause of the fire by using burn patterns, witness statements, and physical evidence. It was deemed an accidental start, caused by a tree branch that broke off and subsequently landed in nearby powerlines during high wind conditions. This errant tree branch caused the sparking and arcing of the powerlines, igniting nearby brush.

Thus far, there have been over 7,000 residences in the Mandatory Evacuation Zone and considered threatened. You can view the official Evacuation Map here, which is being updated in real-time.

Forced to evacuate his Brentwood mansion on Monday, James and his family left as the wildfires got dangerous close to his home. Tuesday night, before the Lakers home game, James spoke to reporters about the emotional moments as he was leaving his home. But, leave no man, woman, or child behind—James wanted to make sure that those who were in similar situations didn’t leave on an empty stomach.

“Those men and women are unbelievable, with what they’re doing and their bravery throughout this time,” James shared in a press conference on Tuesday.

“It’s just challenging at that hour, getting my family, getting my kids, getting everybody and having to evacuate at such a rapid, rapid rate. You don’t really have much time to think about what you can get or what you can do. You just got to get out and get to safety.”

The city of Los Angeles was extremely grateful, with L.A. mayor Eric Garcetti sending out a heartfelt tweet to King James for his help in fighting the Getty fires.

Thank you, @KingJames, for generously sending a taco truck to support our @LAFD firefighters, first responders, and partner agencies working to fight the #GettyFire. pic.twitter.com/rgTSMgWXLU

Other superstars like John Cena have pledged their support, with Cena pledging $500,000 of his own money towards helping fight the California fires.

Currently, firefighters in Northern California are battling against the Kincade fire, the state’s largest active wildfire. First responders and evacuees in Sonoma County have been receiving hot meals thanks to world-renowned chefs, Jose Andres, Tyler Florence, and Guy Fieri. Andres is the chef for the non-profit World Central Kitchen.

If you know of anyone else in need, please reach out to Grit Daily, as we are happy to share your message out to readers in efforts that you may too, receive warm, humble treatment in light of these devastating tragedies.