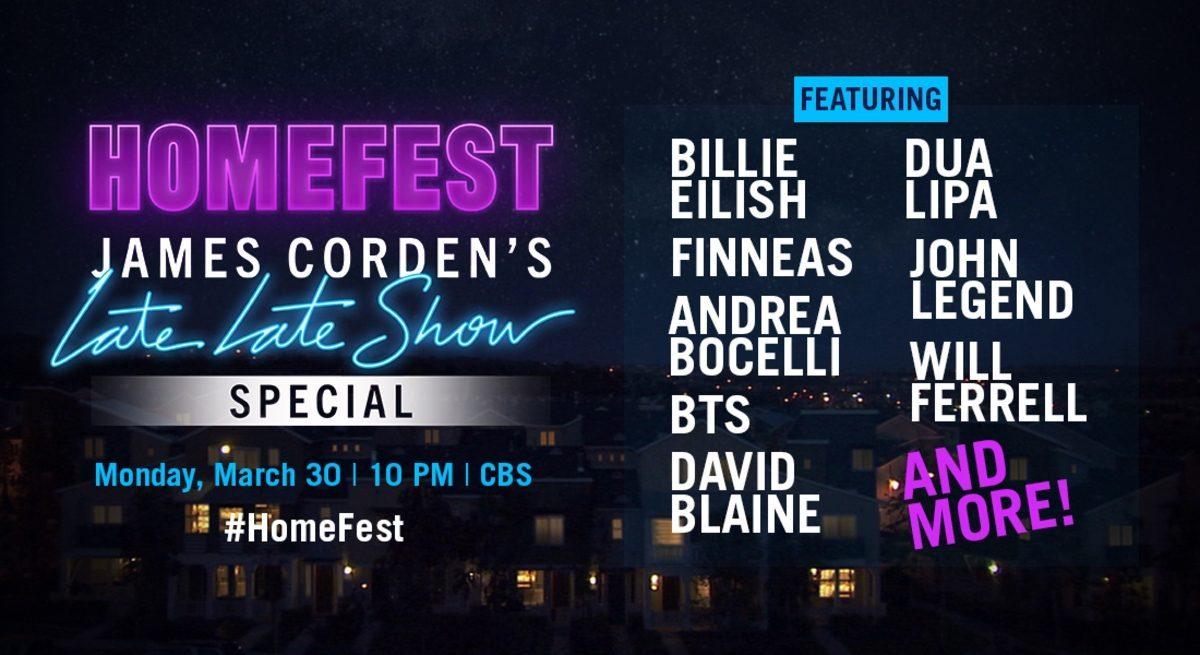 Kick Back with James Corden During ‘Homefest’

James Corden and The Late Late Show are the latest in late night to help “bring people together to keep them apart.”

Homefest: James Corden’s Late Late Special will have some of the biggest names in music and entertainment joining forces to spread awareness on social distancing, all while being in the safety of their own homes.

Corden told Variety that ever since production halted due to the COVID-19 pandemic, their team tried to come up with ways to make a show during this time.

“Once it became clear we couldn’t do our [regular] show, we started thinking, ‘Is there a world where we could make a global show that could bring people together by keeping them apart? I thought maybe there’s a way we could make a show that shows we are all in this together.”

The special will truly be a worldwide event; it will feature performances from BTS in South Korea, Andrea Bocelli in Italy, Dua Lipa in London, and Billie Eilish with FINNEAS and John Legend in Los Angeles. There will also be special appearances by comedian Will Ferrell and illusionist David Blaine.

But where will James Corden be? Well, the host is coming to us from the comfort of his garage; he said that it served as a miniature set for him, and his wife would powder his nose throughout.

In addition to the entertainment, the show will be raising money for organizations such as The CDC Foundation and Feed the Children, and will encourage viewers to donate if they are able to do so.

Ben Winston and Rob Crabbe, executive producers of The Late Late Show, also hope that the program can bring a bit of light to those who need it.

“With the help of some wonderful guests, we are going to try to put on the best show we can, to entertain, raise awareness, raise money, and hopefully lift spirits. Shooting from James’ garage may be far from perfect, but under the circumstances we hope it can help someone, somewhere, who needs some cheer right now.”

Many people have been turning to music as a way to get through these tough times and keep their spirits high.

Earlier this month, citizens of Italy took to their balconies to sing songs together and boost their morale during the pandemic; the country went on a national lockdown after becoming one of the most hard-hit due to COVID-19.

Singer Neil Diamond also joined in, delivering a remixed edition of his beloved song, “Sweet Caroline,” changing the lyrics to better fit the current situation we are in.

More recently—literally last night—Sir Elton John hosted the iHeart Living Room Concert for America. Similar to what Homefest will bring, the one-hour special event served as a benefit, virtual music festival to help raise money for charities and perform for everyone from the comfort and safety of their homes.

You can watch a replay of the event in the video below:

Aside from using it as a form of expression or escapism, studies show that music can actually heal when used as a form of therapy.

In a post from Harvard Women’s Health Watch, executive editor Beverly Merz explains that music therapy can be used to help with anxiety and depression, helps reduce side effects from cancer therapy, and improves the quality of life for dementia patients. Coming from personal experience, I use music to escape and take me away from the stressful moments of life, even if it is just for a little while.

During a time where we seem to be surrounded by uncertainty and fear, music can both provide a sense of serenity in allowing us to break away and also allows us to come together and get through this pandemic as a community.