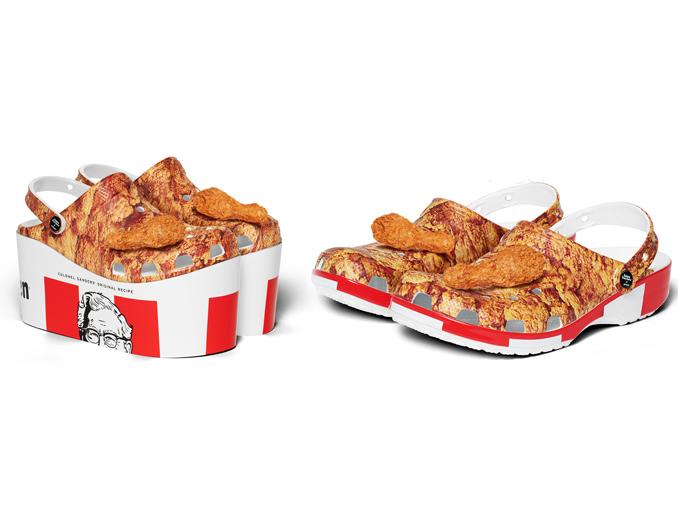 I swear the world has seen it all when it comes to fashion trends, shoe trends, or whatever trends hit the media. From under boob trends that I don’t, and never will, understand to double jean fashion and now we are on to KFC Crocs. All I can say is that I’m widely confused as to what’s going on.

If you are just as confused as I am and don’t know what’s going on, let’s catch up. Recently KFC partnered with the popular shoe brand Crocs and had announced that they were coming out with a classic clog featuring a few fried chickens or two. Oh, and if your wondering yes, the fried chicken on top of the shoe is scented and smells like actual fried chicken.

The long-awaited day when the shoes would hit the market finally came, and they were much more popular than you would think. The shoes ended up selling out within half an hour of launching to the public. Now that’s something that you don’t hear every day and wait. There’s more—this isn’t the last of it.

We all know that once things sell out that you want, you get a little upset. Yes, any logical person would get upset over something they’ve been waiting and saving up for only for it to get sold out. Of course, people are going to get mad, but these KFC X Crocs lovers wanted their shoes.

Yes, many people were fuming and upset because they didn’t get to snag a pair of KFC Crocs, and to be honest I didn’t think they would have sold out so quickly—let alone see people loudly venting about it via social media, but hey you pick what you like right?

KFC announced on their Twitter that the shoes sold out, and many fans quickly replied with their disappointment.

Not only were they upset about the shoes selling out, but many people also claimed that this was an awful launch, and third-party buyers were buying the shoes out to sell them for a more than that thigh on the shoe.

Even though I wouldn’t dare wear these shoes, if I had been waiting in line for 30 minutes or more and realized I wouldn’t be getting a pair, I would be pretty upset as well.

Published in Beauty & Fashion and Brands