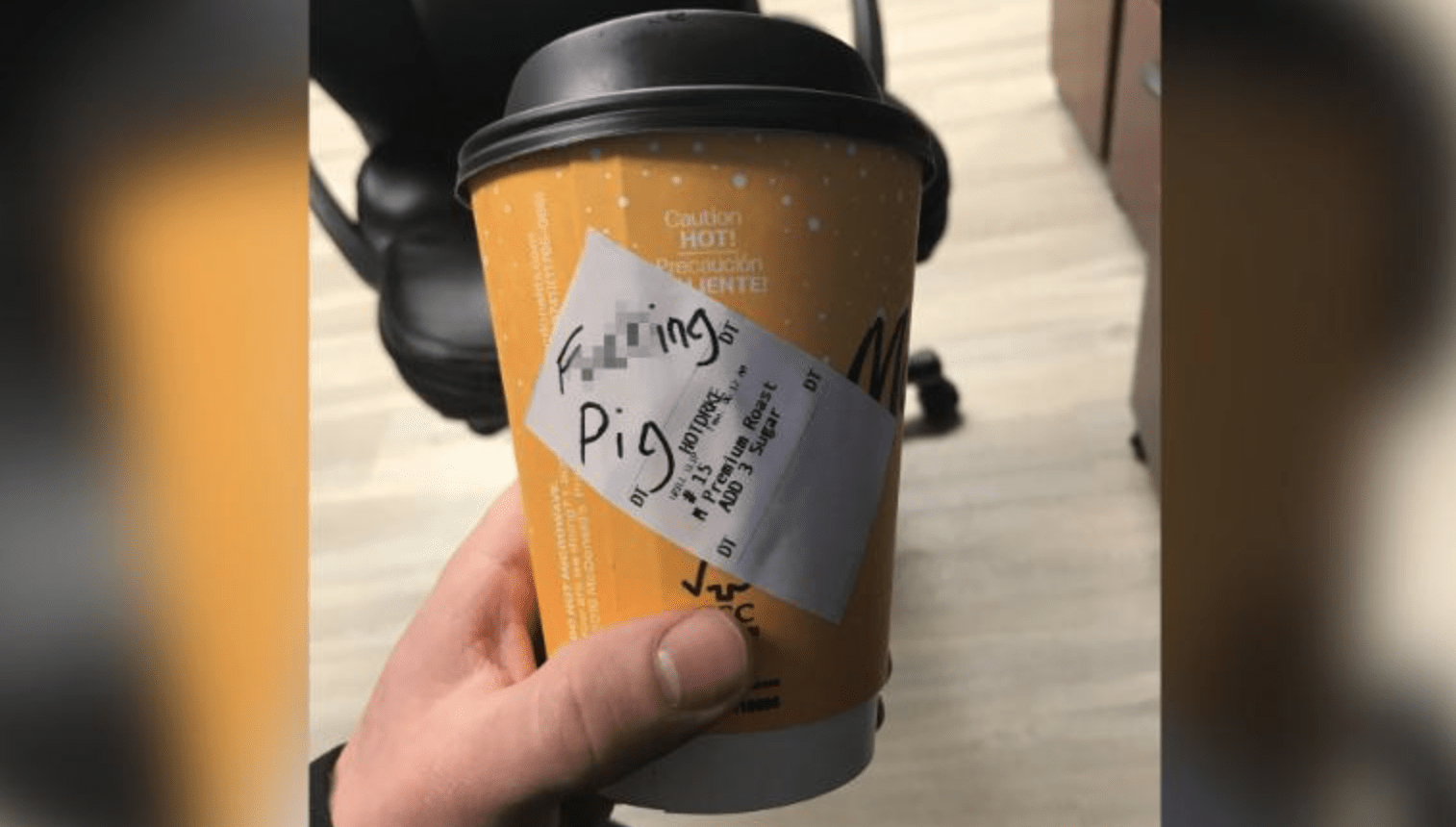 The Herington, Kansas police department caught red-handed one of its officers: claiming a McDonald’s employee wrote a derogatory message on his cup of coffee, the police department announced Monday he is resigning.

Herington Police Chief Brian Hornaday posted the now-deleted incident on Facebook after one of his officers sent him a picture with “F***ing Pig” written across a McDonald’s cup.

Hornaday said, “one of my officers decided to grab a coffee…this morning on his way to work,” and understands this incident is “not a representation of the company (and) is likely the act of one person.”

The chief’s post continued by saying McDonald’s offered the officer a “free lunch” but said “no thank you. A Big Mac and large fries doesn’t make up for it.”

KSNT asked the owner and operator of the Junction City McDonald’s, Dana Cook, about the incident and received the following statement:

“My McDonald’s has the utmost respect for all members of law enforcement and the military and were troubled by the accusation made. We thoroughly reviewed our security video from every angle, which clearly shows the words were not written by one of our employees. We look forward to working with Chief Hornaday as he continues his investigation.”

Footage Shows No Employee Wrote on the Cup

Not everything is as it seems, Hornaday said McDonald’s shared surveillance footage with the police department, proving no employee wrote on the cup.

“In (our) investigation we have found that McDonald’s and its employees did not have anything whatsoever to do with this incident, this was completely and solely fabricated by a Herington police officer who is no longer employed with our agency,” Hornaday said in a news conference.

Cook said in a statement, “(we are) glad that the evidence confirmed our evaluation that McDonald’s and our crew members were absolutely not involved.”

The controversy follows the recent incident in November when a barista in Oklahoma gave an officer his cup of coffee with the word “Pig” printed on the label—on Thanksgiving.

Or back in July when a barista told six police officers to move to a different area because a customer “did not feel safe” with their presence.

And how can we forget the baristas who refused service to 2 sheriff deputies in Riverside?

Hornaday said the incident was “meant to be a joke”, but this joke is far from funny as McDonald’s employee’s received threats.

The police chief continued saying this is “absolutely a black eye on law enforcement” and hopes the officer “understands the magnitude of the black eye that this give the law enforcement profession from coast to coast.”

“Moving forward the Herington Police Department will work tirelessly to regain the loss of trust with both McDonald’s and with the citizens that we serve and any other person that this may have affected.”