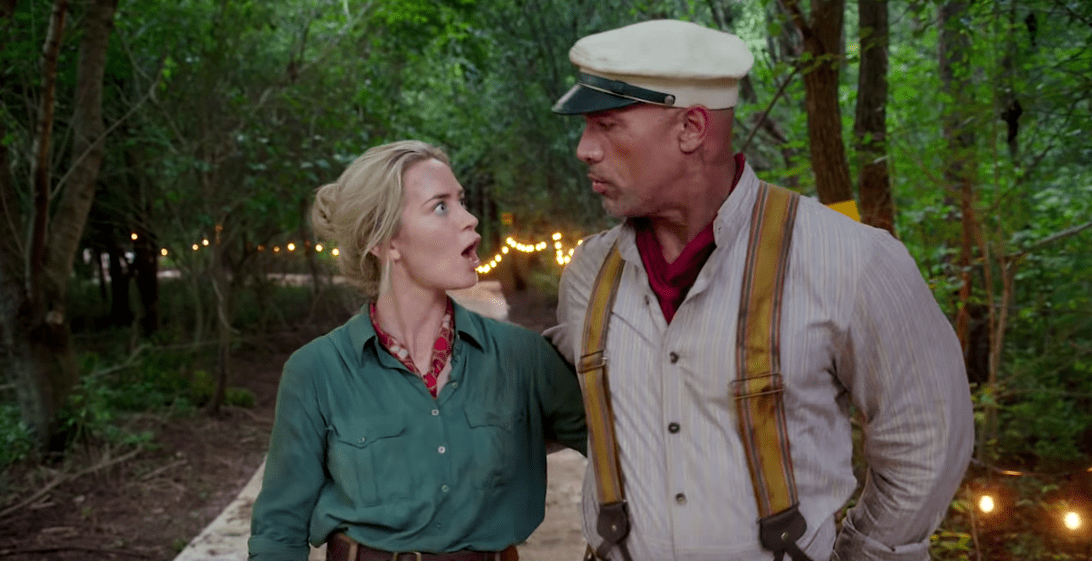 Disney is likely hoping for some Pirates of the Carribean-level success with one of their upcoming summer movies, Jungle Cruise. The Dwayne Johnson–Emily Blunt film is based on the classic Disney ride, which recently sank with park visitors onboard. Perhaps that mishap was the best piece of marketing yet for Jaume Collett-Sera’s (Orphan) popcorn flick.

It’s too bad the trailer isn’t loudly proclaiming, “From the director of Orphan,” not to mention The Shallows, Unknown, and Non-Stop. Collett-Sera has been making exceptional B-movies throughout his career. Trashy movies, yes, but always elevated by Collett-Sera’s sense of fun, style, and adventure. He’s directed his biggest movie yet with Jungle Cruise, which looks like it can’t be more different from his past work, for better and worse.

There’s definitely a sense of old school adventure fused with a modern, CG-heavy approach. Sometimes it’s difficult to judge trailers such as Jungle Cruise because the special effects aren’t nearly finished and, in a trailer, are hard to sell. The movie looks like a big cartoon, in a good and bad way. None of it looks believable, but on the big screen with Dwayne Johnson and Emily Blunt selling it, it probably will play well. The charisma of those two together is the main draw of Jungle Cruise, not the fact it’s based on a Disney ride. Audiences love the both of them, so pairing them together might prove wise come July.

Another Hit for Disney?

The last time Disney adapted one of its park rides into a movie — which is still just a hilarious idea — they got Tomorrowland. It was another old-school adventure movie, but despite being a pretty damn good one, it was a major bomb for Disney. Since its failure at the box-office, the studio hasn’t made too many movies based on their most popular rides. It’s a part of the reason why they didn’t move forward with a movie based on their terrifying ride, “It’s a Small World.” Surely, the studio is now looking for another Pirates of the Carribean-esque series now that that franchise is on its last legs and without its headline news-making star, Johnny Depp.

For the most part, Johnson is one of the last few movie stars around. His name is more important than the title of a movie, usually. He’s the selling point. He’s one of the few movie stars who can consistently open movies, although he’s had a misstep here and there. This year we’re not seeing Johnson’s face everywhere, which may help Jungle Cruise.

Over the last few years, he’d have multiple movies out in a year, making his brand and screen presence a little less special. Since we’re not getting five Dwayne Johnson movies this year, that makes Jungle Cruise more of an event. Like Sidney Poitier said, don’t let audiences see you every week. If you do, then at some point, they’re going to get sick of you and move on to watch the next star.

There’s always the next star. Except for stars like Dwayne Johnson, Tom Cruise, and Will Smith, but they’re only a handful of long-lasting movie stars still opening major movies today. Putting the Disney and Johnson brand together should prove fruitful, unless movies keep taking major hits from the coronavirus this summer.

Inspired by the famous Disneyland theme park ride, Disney’s JUNGLE CRUISE is an adventure-filled, Amazon-jungle expedition starring Dwayne Johnson as the charismatic riverboat captain and Emily Blunt as a determined explorer on a research mission. Also starring in the film are Edgar Ramirez, Jack Whitehall, with Jesse Plemons, and Paul Giamatti.