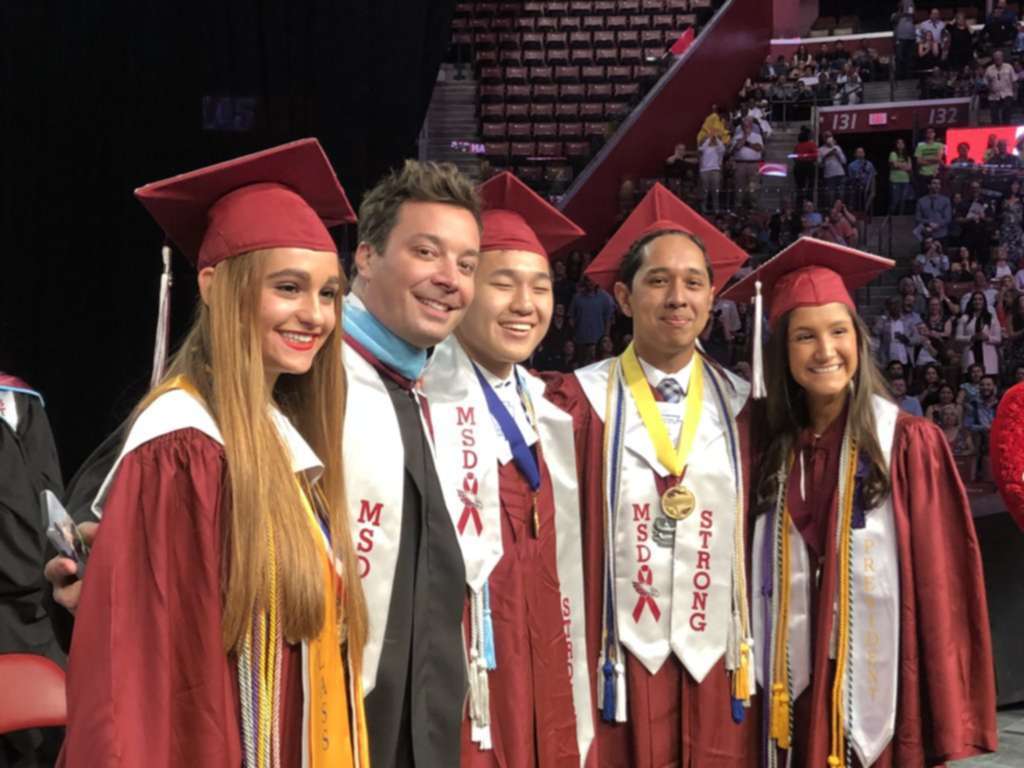 Jimmy Fallon surprised the graduating class at Marjory Stoneman Douglas High School in Parkland, Florida with a commencement address that was meant to inject some humor and hope into an otherwise solemn graduation.

Fallon has been following the Parkland survivor activists since the shooting, even making an appearance in Washington, supporting the March for Our Lives protest last March.

Excited tweets from students confirmed that this was a total surprise for them.

“Today you’re graduating from high school,” said Fallon. “You should feel incredibly proud of yourselves. That doesn’t mean you should rest on your laurels — or your yannys.

“Here’s what will matter: you, the class of 2018, will have graduated. And you won’t be classmates anymore. You’ll be adults who Facebook search each other at two in the morning for the next ten years.”

Like any graduation guest, his most important words encouraged the children to go on. “When something feels hard, remember that it gets better. Choose to move forward, and don’t let anything stop you.”

While Fallon spoke to the crowd, a sea of students wearing #MSDStrong sashes was visible. MSDStrong is the organization created by Marjory Stoneman Douglas High School whose goal is to push back the NRA and advocate for stricter gun laws.

Although the students have been focused on getting to this graduation, MSDStrong and the Parkland 5 have been active, using their voices and the media attention they now direct to create a new campaign detailing how much money each politician accepts from the NRA.

You can watch the entire 10-minute speech on YouTube:

Fallon made headlines at the start of the year with his support for the Parkland students, who have been at the head of a new push for gun control measures in the United States. Fallon made an announcement on his show back in February that he would be one of the celebrities attending the March For Our Lives. Fallon adorned a red lapel pin while on camera, stating:

“What they had to live through, and what they have to live with, is something that I can’t even imagine, and I think what the students of Marjory Stoneman Douglas High School are doing is unbelievable. They’re speaking out with more guts, passion, conviction and common sense than most adults. They’re high school students, it’s beyond impressive. That strength that they have is inspiring.”

In a moving display towards the end of the graduation ceremony, Marjory Stoneman Douglas High School awarded posthumous degrees to the four teens that died on the Valentine’s Day massacre. Family and friends accepted the honorary degree on behalf of Nicholas Dworet, Joaquin Oliver, Carmen Schentrup, and Meadow Pollack.