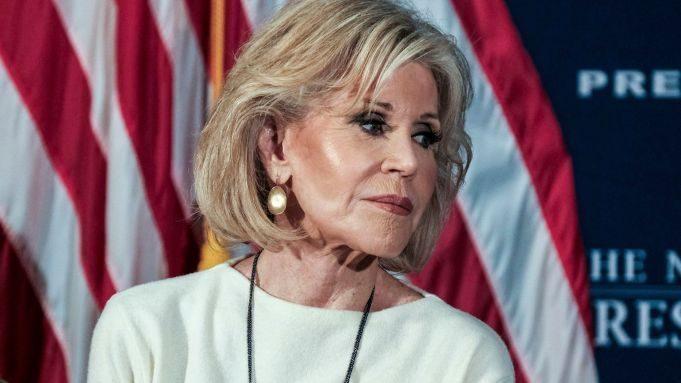 Fonda has been a leader in the now weekly protests, called ‘Fire Drill Fridays’, which have drawn other celebrities like Ted Danson, Piper Perabo, Diane Ladd, and Sally Field (who was arrested last week). The protests are co-organized by Code Pink and Fonda, who was arrested in November for civil disobedience for her role in them.

In today’s arrest, the crowd echoed support for Fonda via chants and “Happy Birthday” songs as she was handcuffed and led out of the area. She has pledged to participate in the protests until her contracted Grace and Frankie shoots resume at the year’s beginning.

The ‘Fire Drill Fridays’ site launches with a message from Fonda, explaining her participation in the actions:

“As Greta Thunberg said, “Our House Is On Fire”, and we need to act like it.

Inspired by Greta and the youth climate strikes as well as Reverend Barber’s Moral Mondays and Randall Robinson’s often daily anti-apartheid protests, I’ve moved to Washington, D.C. to be closer to the epicenter of the fight for our climate. Every Friday through January, I will be leading weekly demonstrations on Capitol Hill to demand that action by our political leaders be taken to address the climate emergency we are in. We can’t afford to wait.

She was one of several arrests by Capitol Police, and it is currently unclear of she will spend time in jail.