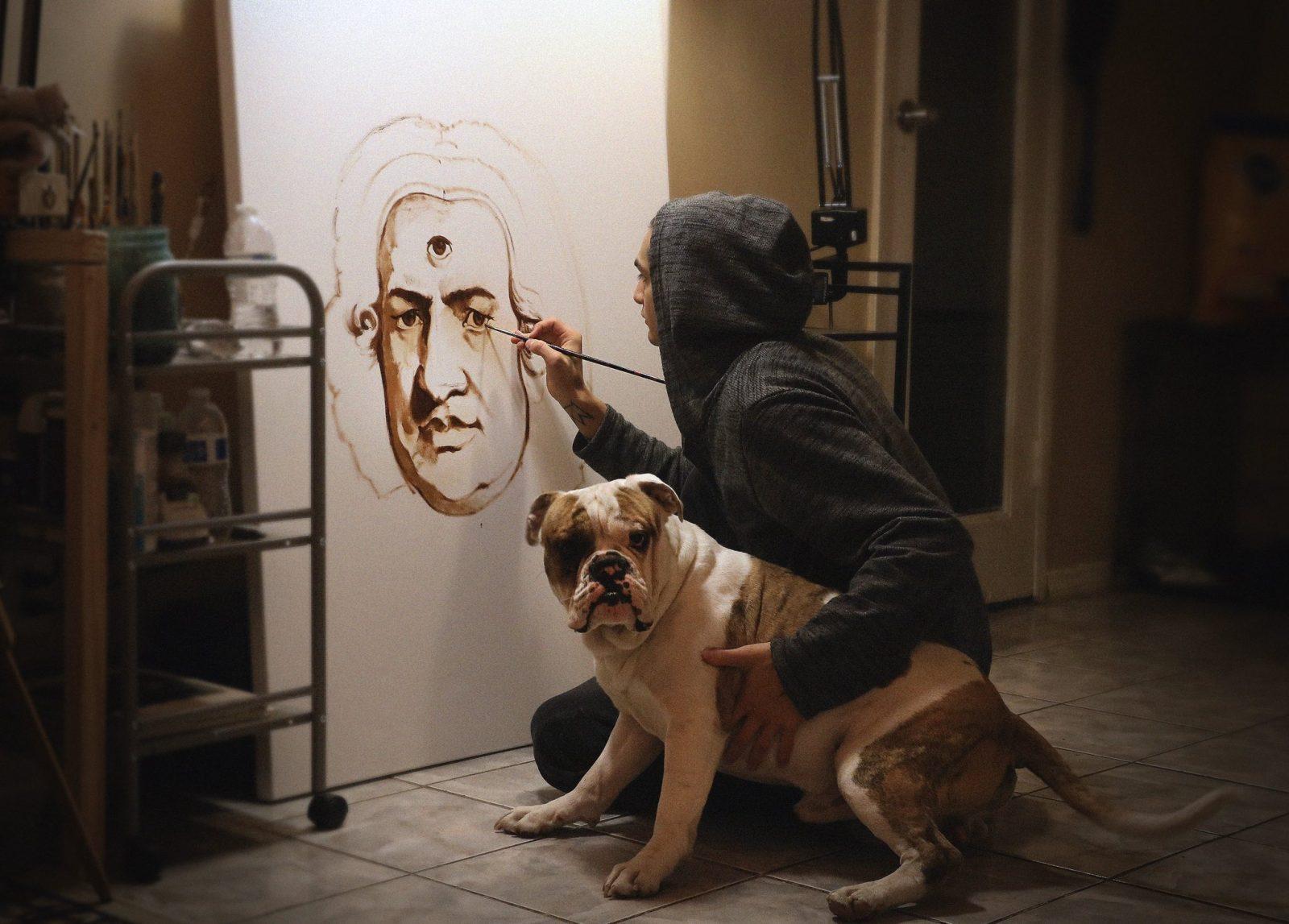 Isaac Pelayo is Bringing the Renaissance to the 21st Century

Los Angeles is home to many players in the art world. One prodigious talent from the City of Angels is painter, Isaac Pelayo. The 21 year old artist has found a unique style that harks back to the renaissance period while producing decidedly 21st century imagery.

Being born to an artist father and embarking on his own career without any formal training, it would be easy to say that the skills were in his blood. However, nothing is that simple. Pelayo acknowledges that he already had the “tools of the trade” in an interview with Voyage LA, but technical ability is nothing without an artistic voice. He discovered his voice through a highly philosophical and introspective process, drawing and painting not only to escape emotional turmoil but from a “desire to understand myself and those around me better.”

A Signature Style but a Diverse Catalog

While Pelayo’s visual style may be easily digestible for the art world, his content is polarizing. Putting Tupac in aristocratic garb from the renaissance period in a high contrast piece titled ‘Sir Pac’ is a reverent homage to the late hip-hop icon, something that most can appreciate. Painting a portrait of the infamous, late WWE star Chris Benoit with a third eye, is a little harder for most to wrap their heads around. Even the WWE have distanced themselves from the wrestler after the tragic murder-suicide, and yet, Pelayo found a way to bring some humanity to the painting. The heavy shadows and glistening, tired eyes — especially the third eye with bags under it — show the emotional turmoil Benoit must have been experiencing at the end of his life.

While he has certainly found a niche for himself in the realm of portraits, painting touching pieces paying tribute to the late Nipsey Hussle and Kobe Bryant, he has also taken a dive into the world of surrealism. Pelayo’s piece ‘Retina’ embodied the soul of a possessed Salvador Dalí painting, with three hummingbirds with human skulls for heads — skulls with third eyes — floating around an eyeball within the confines of a coffin. The striking piece pulls you in with its black on white background and the intricate strokes and color work that make up the birds.

His early pencil on paper self portrait with his body dissolving into a flock of butterflies shows his skills and artistic inclinations. His work captures beauty, darkness and somber humanity in the same brush strokes. In a lighter, yet equally captivating piece, cartoon birds and bees fluttering around a topless woman. This vivacious painting was part of his show appropriately titled ‘Birds&Bees’, an exhibit dealing with “[his] early introduction to sex and animation. The two being the biggest motivators throughout my entire life thus far.”

An Artist with a Vision

Isaac Pelayo has also used his art for political protest, an effort that many successful artists undertake throughout their careers. It is one of the reasons why art is censored in oppressive regimes around the world: it is a part of an artists responsibility to deal with the world around them. The results of which can be confrontational as they attempt to uplift society.

He placed his rework of the ‘Mona Lisa’ on a wall erected outside of the Gagosian art gallery in Beverly Hills. Above the painting, in red graffiti strokes, he wrote, “walls are for art! Not dividing people…” The results of this piece were very effective due to the in your face presentation contrasted with the calming energy of the famous French art museum.

We were very fortunate to have Isaac Pelayo as a speaker at the Grit Daily Live! Miami Art Summit. As a panelist alongside Camo Customz, we got an incomparable look at the artistic process and the way in which artists market themselves in this internet age.

Be sure to keep up with Isaac Pelayo’s work on Instagram and if you are in Los Angeles, check out his exhibition at the Bruce Lurie gallery on March 21 at 7PM. Part of the event’s proceeds will help the Adopt the Arts foundation keep art in schools.