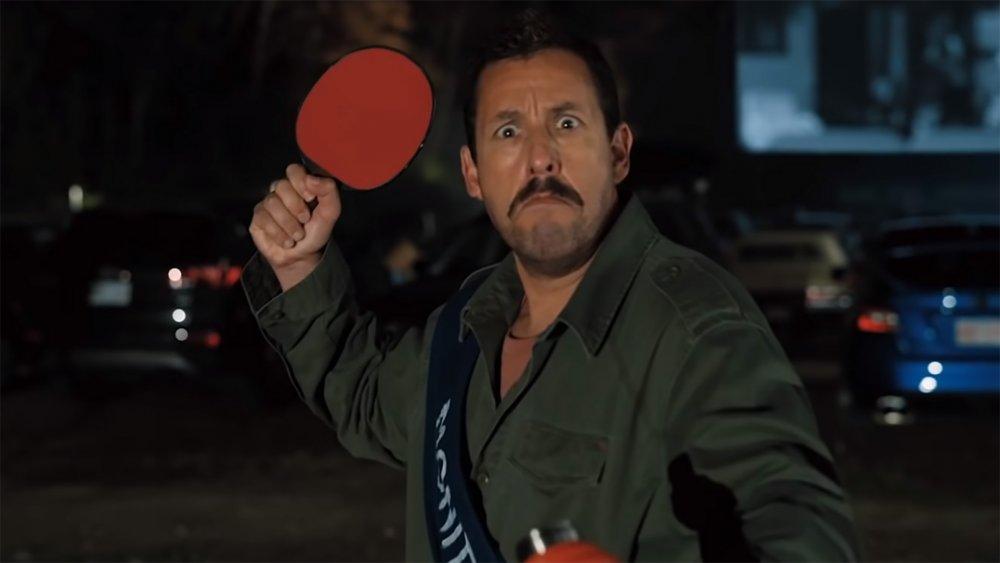 Hubie Halloween is the latest comedy from Adam Sandler’s deal with Netflix. It’s more of the same of what fans expect from Sandler’s Netflix pics these days. The recipe remains the same with more misses than hits. Although Sandler’s last Netflix comedy, Murder Mystery, was a nice and light comedy, his latest isn’t half as charming.

It is a well-intentioned comedy, though. Directed by Steven Brill (Mr. Deeds), the Halloween movie has promise and displays it now and then, starting with a cameo that gets a good laugh. From there, the Netflix comedy isn’t funny enough to satisfy. Sandler, once again, dons a funny voice and a childlike persona for the kind-hearted hero, Hubie Halloween. The character has a heart of gold, but he lives with his mother and is widely mocked in his hometown. He keeps an eye out for his neighbors and raises alarms over nothing, though, so when strange happenings occur this Halloween, nobody believes him. Hubie’s town is under attack this Halloween, and he’s on the case.

The biggest problem with Hubie Halloween is it’s just not funny enough. The laughs are too rare given how much Sandler, who co-wrote the script, throws at the wall. As brilliant as Sandler’s comedic timing is, it’s often completely off the mark in Hubie Halloween. It’s exhausting to watch at times, seeing a comedic pro rarely rise above a few smiles and chuckles for 100 minutes.

It’s a baffling experience at times. This is a movie packed with hilarious performers, including Maya Rudolph, Tim Meadows, Steve Buscemi, Keenan Thompson, and Colin Quinn. Quinn is such a naturally funny presence, but even in Hubie Halloween, his main scene falls flat. Buscemi, per usual, does score some laughs in the movie. No matter the Sandler movie he appears in, the actor just hits the right notes to get a good laugh.

At 102 minutes, Hubie Halloween is slow for a comedy. The unfortunate thing is, it’s the right time for an Adam Sandler comedy. I desperately wanted a nice piece of silliness with enough laughs to forget about some troubles for a little while. During times like these, some well-crafted silly jokes can really hit the spot. Hubie Halloween does not do the trick, unlike Sandler’s best comedies, which at their best, can be such joyful and communal experiences.

Hubie Halloween does have a positivity and kindness about it that, at times, is endearing. It’s always nice seeing a hero’s bravery defined by his kindness and caring for one another, not being able to throw the hardest punch or save the world. Heroes like Hubie Halloween, the misunderstood underdogs with hearts of gold, are usually so rootable and loveable. Since most of Hubie’s jokes fall flat, though, he’s not as lovable or as watchable as he should be.

The movie has a few bright spots worth noting. The main kids in the movie, for instance, are a charismatic bunch of actors. The best scene in the movie is a kid watching The Creature From The Black Lagoon in awe, which is about as real as Hubie Halloween gets. It’s one of the few nice scenes in Hubie Halloween, which isn’t a bad movie by any means. It’s definitely not the worst of Sandler’s Netflix comedies. Hubie Halloween has its moments and its heart in the right place, but there’s simply not enough laughs to make for an entertaining time. If it satisfies Netflix’s and Sandler’s most diehard fans, however, that’s wonderful. We could all use some laughs, and if Sandler provides them for millions of people with Hubie Halloween, more power to him and Netflix.