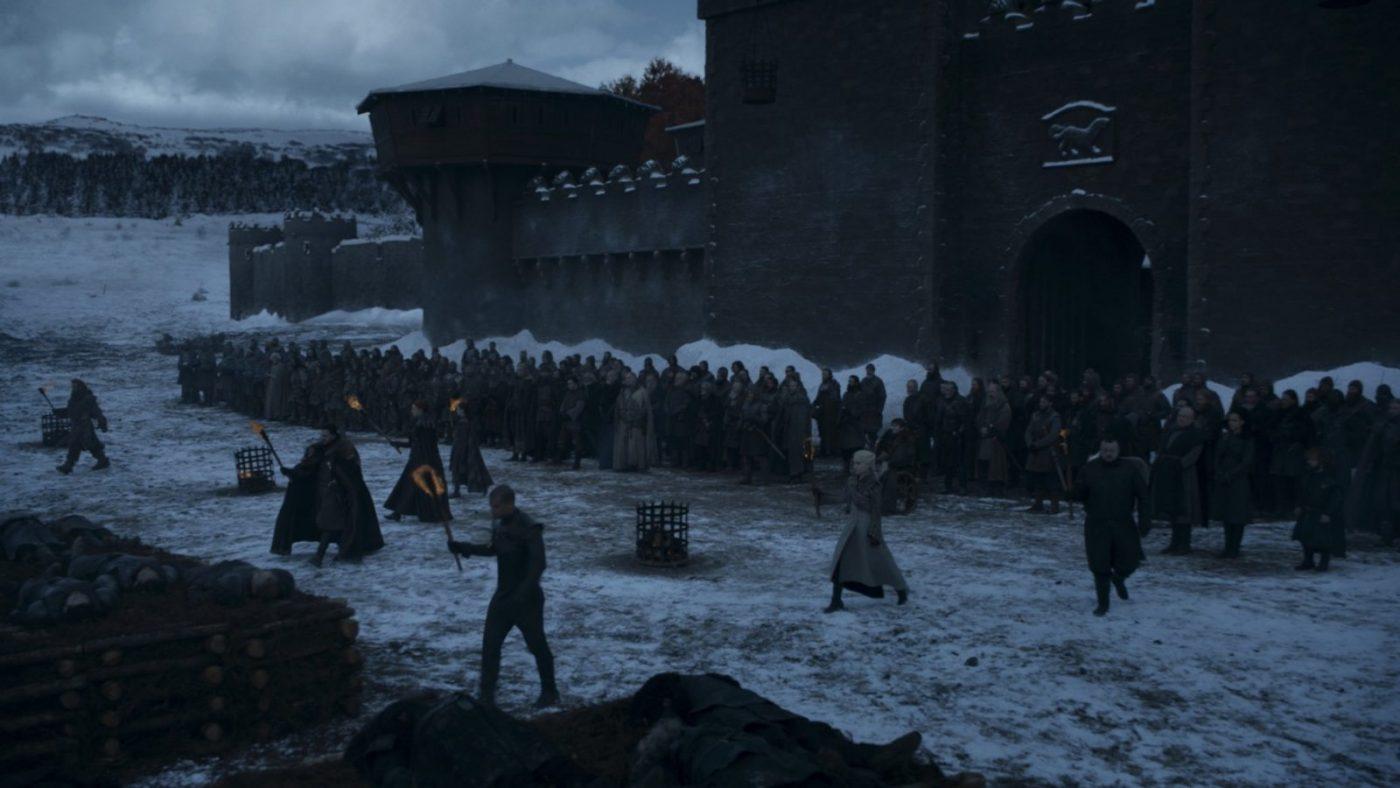 ‘Game of Thrones’ Season 8, Episode 4: “A Debt That Cannot Be Repaid”

Disclaimer: This piece is FULL OF SPOILERS, so if you haven’t watched Season 8, Episode 4 of “Game of Thrones,” march your ass away from Winterfell and back into your cozy home.

After leaving Game of Thrones Episode 3, with the Battle of Winterfell behind us, it’s time we bury the dead upon rows of funeral pyres.

“A Debt That Cannot Be Repaid”

Episode 4 of the final season of Thrones opened up to a morbid and heart-wrenching ceremony, as we watched our characters bury thousands—most notably, Jorah Mormont, Lady Lynna Mormont, and Theon Greyjoy.

“We’re here to say goodbye to our brothers and sisters. To our fathers and mothers. To our friends. Our fellow men and women who set aside their differences to fight together and die together so that others might live. Everyone in this world owes them a debt that can never be repaid. It is our duty and our honor to keep them alive in memory. For those who come after us and those who come after them, for as long as men draw breath. They were the shields who guarded the realms of men, and we shall never see their light again.” –Jon Snow

Episode 4 opened as we watched Jon Snow, Daenerys Targaryen, and others light their torches to properly bury (and burn) the dead.

In the opening scene, we see Dani by Jorah’s lifeless body, giving him her tears as she whispers something into his ears. Fulfilling his oath and promise to love her until his dying breath, Jorah fully redeemed any questionable instances in which Dani could have been holding against him.

For the girl who is just as bad as Arya Stark, seeing her cold, lifeless body on the ground reminded us of how precious life truly is.

Perhaps the most powerful of the opening scene is Sansa by Theon’s side. As she sat by his body with tears down her face, she gives him the highest honor that fans thought he would most likely never see—the House Stark pin.

Beginning to end, Theon Greyjoy earned his place in the Stark house.

After the carcasses were lit up, Jon Snow gives what appears to be one of his best “kingly” speeches, in this instance, a mass eulogy, to the city of Winterfell, reminding them of what the sacrifice the dead have provided.

He demands that everyone continue to stand by one another and protect one another, as this was a debt that cannot ever be repaid.

After a funeral and eulogy like that, it’s no surprise Winterfell took to drinking and eating in its halls, sharing stories after the battle against the Night King ended.

Struggling internally with her love for her nephew, Jon/Aegon, and his claim to the Iron Throne, Daenerys still believes she can win the masses over. While it looks as if Dani is about to have a mental breakdown, she calls out Gendry, only to remove the title of “bastard” from his name, naming him Lord over Storm’s End, as the rightful heir to Robert Baratheon, and toasts to Arya Stark, the hero of Winterfell.

Indeed, Lord Gendry’s excitement is short-lived. Filled with excitement, he finds Arya to share the good news, hoping that his proposal to her would end with her by his side. While the two shared a final make-out session, unfortunately, and foreseeably, Arya turned him down, telling him that “any lady would be lucky to have him, but she’s not a lady, and never has been.”

But don’t feel bad Gendry, Tormund also got shut down, as he has absolutely no idea how to speak to women.

King of the North

Meanwhile, Dani continues to observe the rest of the room, drawing her attention to a drunken Jon and his gang, including a very drunken Tormund, praising him for his bravery and balls for uniting enemies where there was no certainty he wouldn’t be slaughtered in the process. It appears for a moment, that Dani sees the love Winterfell sees for Jon as their rightful king, making her question her very role in the game of thrones.

Never Have I Ever

Even in Winterfell, it’s nice to know our college drinking games still have value. At one table, Tyrion, Jaime, Brienne, and Podry are playing drinking games, until Tyrion opens his mouth about Brienne having never slept with a man before, and her awkwardly walking off. Oh, and she never drank that round.

Since their last encounter, Sansa and the Hound have not come head to head with one another until last night. As the Hound is greatly aware of all the pain and suffering Sansa has endured, most notably with Ramsay Bolton, he’s always known her as an innocent “the little bird.” He then went to explain that had she decided to leave Kings Landing with him and Littlefinger, none of the bad would have happened to her.

“Without Ramsay, Littlefinger, and the rest, I would have stayed a little bird all my life.”

“I’ve Never Slept With A Knight Before”

While everyone continues to drown their sorrows in alcohol and food, other characters like Jaime, Jon, and Dani are involved with their own struggles.

The ongoing character development of Jaime Lannister has been anything but predictable, especially since Brienne entered his life.

When Brienne manages to escape the drinking game she was immersed in with Tyrion, Jaime, and Podry, Jaime goes after her…all the way back to her quarters.

In what was an incredibly uncomfortable “foreplay” scene up and until the moment they start stripping like there’s no tomorrow, Jaime finally hit a major milestone—getting over his incestual and sexual infatuation with his sister, Cersei.

However, we would later come to find out the choice that Jaime makes when it comes to Brienne and the people of Winterfell versus his sister.

“I Don’t Want the Throne”

After learning a disturbing and life-altering truth, Dani still yearns for Jon’s love and affection. Making her way from the hall, she visits Jon in his quarters, asking if he was drunk. To which he replied, “no, only a little drunk.”

The aunt and nephew share a passionate kiss, as they both continue to fight their feelings. However, Jon, pulling away, abruptly ends the moment, lending way to a very awkward conversation and foreboding plot line for the remaining episodes.

Jon responds telling her that he doesn’t want the throne, which according to the dragon queen, doesn’t matter what he wants—it’s what the people want and believe. She presents him with what seems like a touching future, but ultimately demands that he swear himself to secrecy with respect to his heritage, name, and claim to the Iron Throne, paving the way for the two to continue their love affair with him by her side as Warden of the North.

She told him that she’s never been one to beg, but she is begging him now to tell nobody of his true identity, which would only create further division.

Remaining loyal to his family, Jon believes he at least owes Sansa and Arya the truth. He sees a future where his sisters will respect his decision to not take the Iron Throne, live alongside Dani, and maintain peace across the North, holding closely his secret.

“We can all still live together,” he said.

“Yes,” she hastily responded. “And I just told you how it can,” as she walked out of his quarters.

Meeting of the Starks

Shortly after their awkward encounter, Jon called a family meeting out by Bran’s favorite tree. Expressing their disappointment with Jon, Sansa and Arya don’t understand why he’s letting Dani take over; that they are a family and they are Starks.

“I’m not a Stark,” he replied. He tells them he has a secret, but in order to share, they must swear themselves to secrecy. Upon agreement, then turns his gaze over to Bran, asking him whether he should reveal his deepest, darkest secret.

Unfortunately, that didn’t last long, as Sansa went blabbing to Tyrion, who probably already had a hunch. This won’t end well for Sansa and Jon.

As people begin preparing for their march on Kings Landing, the Hound is off on his own adventure, soon to be joined by Arya Stark, who states that she needed to be gone from everyone as well.

Everyone seems to be questioning the leadership that Dani would bring to the realm.

Meeting of the Birds

Varys, who seems to now know Jon’s full secret, thanks to Tyrion blabbing, believes that Jon would be better suited for the throne, and Dani will fall victim to the very evil she has sworn to destroy.

“I worry about her state of mind,” he told Tyrion.

Tyrion, believes Daenerys will make the right choice and that she would be a strong queen with a powerful “Warden of the North” by her side.

He begs Varys not to take any course of action that would result in betraying Daenerys’ trust, ultimately leading to her downfall. He didn’t seem to bite.

After surviving last week’s icy blasts, Rhaegal finally had his final flight as he was shot out of the sky, thanks to Euron Greyjoy’s armada and marksmanship. Watching Rhaegal fall below to the depths as he took arrows through his neck and stomach, pushed Dani over the edge, as her temper starts to take over.

We come to find out that Greyworm has suffered a tragic loss, believing Missandei to have died in the ambush. However, we soon learn that she was taken prisoner by Euron, now in shackles in the grasp of Cersei.

As Jon and Dani’s army approach Kings Landing, they see Missandei on top of the castle, in chains, foreshadowing what turns out to be a gruesome death.

Walking past the Queen’s hand, Tyrion approaches the gate, within hearing distance of his sister.

“You’re not a monster,” Tyrion pleaded with Cersei, begging her to relinquish the crown.

After what happens to be the most heartfelt and vulnerable moment we’ve seen from Tyrion, Cersei, in tears, gives the order—off with Missandei’s head.

Hitting Daenerys and Greyworm hard, Dani turns around and is engulfed in complete anger. This can’t be good for her future.

“You’re Not a Monster”

When the world seemed just a bit brighter for Jaime, he had to go and mess it up, telling Brienne that he’s heading back to King’s Landing, because that’s where he belongs.

After learning about the attack on Daenerys’ ship from Sansa, Jaime makes the decision to confront his sister once and for all. But, not before being caught by Brienne after trying to sneak out on a night full of sex.

“She’s hateful, and so am I,” he told to a tearful Brienne. She begged him not to do this, that he has been and always will be better than Cersei. But, he had to go and remind her of all the awful things he has done in the past, simply because it made Cersei happy.

As Brienne’s world comes shattering down, Jaime rides off in the distance towards King Landing to try and stop his sister.