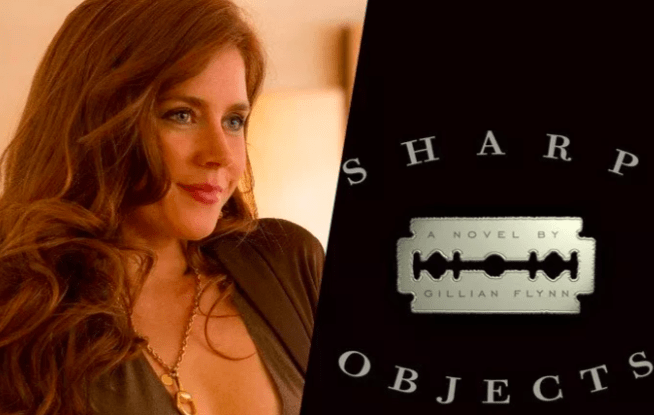 HBO’s recent series Sharp Objects starred a remarkably adept Amy Adams whose character, having suffered from childhood psychological abuse in her upper middle class home and gang rape trauma later, has very graphically self-harmed as a teen and then continues on as an adult. She has cut words into her skin like ‘vanish,’ ‘dirt,’ and ‘wicked’ the first word, “slashed on an anxious summer day at age thirteen.”

Psychology Today recently reported that about 1 in 4 teen girls deliberately harm themselves without suicidal intentions (non-suicidal self-injury or NSSI) suggesting, this is “a really, really high prevalence of self-harm.” The alarming report was published in the American Journal of Public Health.

If that isn’t shocking enough, there’s also been recent and horrific stories about “Momo Challenge” — an online viral challenge that is allegedly associated with a terrifying female, doll-like figure. The game almost bullies players to commit self-harm, and has spread to social media like WhatsApp, Facebook and YouTube.

Unfortunately, while it’s led young people to harm themselves and others, it follows other online creations like “Slenderman” and “Blue Whale” that have also targeted vulnerable teenagers.

Robyn E. Smith, an MFT in private practice in Los Angeles who has worked with adolescents, adults and couples from diverse backgrounds, finds the growing threat of cyber bullying as frightening: “Social media is allowing kids and teens to traumatize others in their peer group. For targeted kids, it just exacerbates the challenge of dealing with psychological pain they may already be struggling with. It can impact an already vulnerable person, who could be susceptible to self-harm. Social media is allowing for bullying in a whole new way.”

She even cites online “eating disorder” sites that are purportedly organized to support people with anorexia or bulimia. Some observers say these sites actually promote a myth that eating disorders are choices, rather than a physical and mental illness. And, Smith understands the need for community where problems can be discussed but suggests, “Pro-ana and Pro-mia sites can encourage people further into an eating disorder — a place where someone can brag about how many times they purged in one day or say, ‘Look how thin I got!’”

Looking into these sites, despite their good intentions, you’ll find “tips” on how to induce vomiting, and sharing crash dieting techniques. Smith adds, “Unfortunately, social media can encourage people to be even more self-destructive.”

Author Gillian Flynn, who wrote the novel “Sharp Objects” that the HBO series was based on, intimately understands this self-destructive theme. While, she admits she herself wasn’t a cutter as a teen, she relates to her fictional reporter character, Camille, who started self-harming at 13. Flynn openly explains, “Camille’s like me, although I’m not a self-cutter, but I knew her. I’ve had a real affinity for self-destruction and I think a lot of girls and women do, that they deal with a fondness for self-annihilation or wish for it. I mean it’s not like complete suicidal thoughts, but skirting with them and I certainly did for a long time.”

Despite these alarming statistics, it’s still often done in the shadows, as most self-harm is private — including cutting, burning, binge drinking and having eating disorders. Additionally, the AJPH report suggests that while certain factors, like being bullied physically and online or identifying as LGBTQ, are linked to a greater likelihood of self-harming, risk factors overall are the same for both genders. In effect, it’s not just teenaged females and LGBT people who are susceptible to self-harm, but also heterosexual males — except males, probably in denial, frequently under-report and don’t seek out help.

In fact, until this male reporter saw pre-screenings of Sharp Objects and saw images of Amy Adams’ character with those various words scarred into her flesh, I didn’t know much about self-harm.

Then a social media female friend reached out when I posted about Sharp Objects, talking about her daughter “Taylor Victoria’s” story, which is very candid in its depiction of her own cutting experiences:

“I was 13 when I first harmed myself. I was feeling emotions I didn’t understand. I was sad and embarrassed because someone at school teased me about my ears and the person I had a crush on was laughing with them. I couldn’t handle the helplessness, and I was angry but I held that in. That only made it worse and led me to cut my wrist with scissors. That is the first time I ever intentionally hurt myself and there’s science behind why it felt good, but it made me feel like I had control over my emotions for once. In an episode of ‘Family Guy,’ the parents are fighting and the kids start to pull out their hair and say, ‘I can’t control that, but I can control my hair,’ which is how I felt.”

Whether it be from childhood trauma or other reasons that cause overwhelming emotional pain, therapist Smith describes how young people are drawn to self-harm: “The title of this book, ‘A Bright Red Scream,’ resonates with my understanding of self-harm. When there’s an intolerable amount of psychological pain, a person without the ability to cope or without help to manage that pain, can resort to creating tangible, physiological pain in a way that paradoxically provides some momentary relief. When you use a razor and see blood emerge and you’ve caused this yourself, it’s a way of gaining some control over something that feels out of your control. You’re saying, ‘At least I’m the one doing it.’”

When I researched further, I immediately got responses from three males including two Millennials, all of whom had self-harmed as teens, and all were heterosexual.

First, “A” said, “In college, I was shunned from my group of friends and lost my girlfriend. Good ol’ drama. I turned to alcohol quite frequently. One night after a dumb move on my part, in which the cops were called, I put the lit end of my cigarette onto my arm. That wasn’t enough, so I went back to my room, took out my pocket knife, and cut into my arm. I legitimately remember the idea of ‘controlling the situation.’ The scars are present today and I hate when people notice them. I hate to lie and so I tell them the truth, but feel so ashamed to say what they’re actually from. But, I’m glad that I didn’t become hooked. What is so crazy is this exists amongst people we run into every day.”

And, another male “M” explained why he finally got help for his self-harming: “I just didn’t want to hear my mom cry again.”

The Onus is On All of Us

Therapist Smith feels “It’s likely that boys and young men, even heterosexual teens, are under-reporting self-harm. They’re probably the least likely to seek out help.” But she offers some positive advice to us: “Pay attention if it looks like someone is suffering, or if a person is isolating him or herself. Listen, observe, try to get someone who may be struggling to talk about it with you or somebody else. It’s unfortunate to turn a blind eye. Yes, teens want to hide what they’re doing because of shame or guilt, but another part of them is needing to talk. So, show interest without being accusatory — try couching it like, ‘Hey I’ve heard some kids…’ and that could lead to someone admitting, ‘Okay, I’m doing that, too!’  Showing interest and concern can make all the difference.”

For more information on self-harm, check out “Helpguide.org” and “Young Men’s Health”.