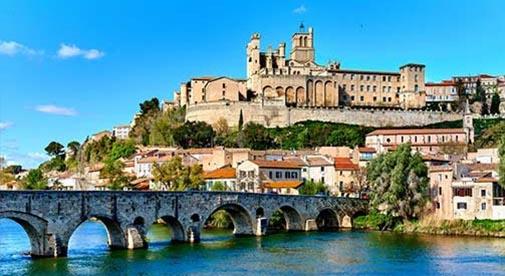 Located near the shores of the Mediterranean Sea, in the Occitanie region of Southern France, Béziers is surrounded by almost 1,158 square miles of vineyards. The town lies at the heart of the largest wine-producing region in the world and is brimming with historical sites.

Béziers is positioned on the Roman Via Domitia, an ancient stone road that connected Spain to Italy. Today, that road has been replaced by the A9 superhighway, making it easy to explore this exciting and historic region.

Béziers was built on top of a hill overlooking the Orb River. The hill has been occupied since Neolithic times.

The town’s history is mirrored by the nearby settlement of Oppidum D’Enserune. A short distance from Béziers, it is argued this ancient fortified town, that dates back at least 2,800 years, is one of the most important archaeological sites in Europe.

The Roman Empire recognized the strategic potential of Béziers. After the defeat of the Gauls at the Battle of Alesia in 52 BCE, the Romans strengthened Béziers with army veterans who could be activated during an emergency.

Béziers’ population grew as a safe and secure city under Roman military protection. To meet the entertainment needs of the expanding citizenry, an amphitheater was built in the heart of the town.

Today, the amphitheater is only a shadow of its former self. However, it still lends a spark to your imagination if you try to visualize the gladiator battles and floral pageantry that once took place here.

A Long History of Wine Production

The history of wine production in the Languedoc region and around Béziers dates back to the first vines planted by Greek and Etruscan settlers in the 6th century BC.

Under the Romans, the region became one of the primary suppliers of wine to Rome. The area even exported its products as far away as Egypt, Turkey, and Greece. During this time, Béziers became a key manufacturer of amphorae, which are two-handled clay jars used for transporting wine.

In 1907, Béziers became the epicenter of an uprising known as La Révolte des vignerons du Languedoc, or the Revolt of the winemakers of Languedoc. Winemakers were furious over the collapse of wine prices and the local economy caused by cheap Algerian imports, overproduction, and falsely labeled wine.

The revolt fizzled after new laws protecting the origin of wine were enacted. Today, those laws are still strictly enforced as appellation d’origine contrôlée (AOC), which protects the wine’s designation of origin.

The event is commemorated with a giant trompe-l’oeil painted by Jean Pierson and Patrick Commecy. Emblazoned on the side of a house, the image can be found behind the Roman amphitheater on Rue des Capucins.

Completed in 1681, the UNESCO-protected Canal du Midi runs right next to Béziers. This engineering marvel connects the Atlantic to the Mediterranean and is popular among canal boat enthusiasts.

One of its premier features is the Fonserannes Locks. These nine locks were built to raise and lower boats between the canal and the river Orb. They are a leisurely stroll or a bike ride from Béziers.

The Fonserannes Locks were built mostly by women. The skills and engineering expertise of these women were probably developed by building dams high in the Pyrenees Mountains and were based on Roman techniques.

In 1858, the Pont-canal de l’Orb was built over the Orb River and allows boats to remain in the canal and avoid the river’s volatility. Prior to the bridge’s construction, boats were forced to enter the river and contend with potentially swift and dangerous water flows.

Built atop the ruins of a Roman temple, the current structure of the Béziers cathedral dates back to the 1400s. The previous cathedral was burned to the ground during the Catholic crusade against the Cathars in 1209.

A climb up the winding staircase to the top of the cathedral offers a panoramic view of Béziers and the vineyards of the Orb river valley.

There has been a significant effort to revitalize Béziers in recent years. As a result, a wide range of cafés, restaurants, and art is beginning to emerge. With change in the air, it might be a good time to have a closer look at Béziers.

Related: These Crisis Deals Are Not For the Fainthearted…