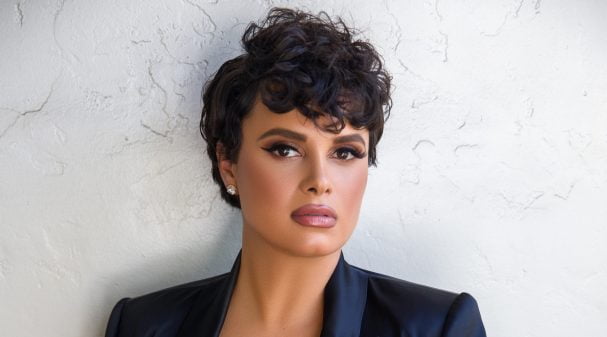 S’More is a new dating app trying to connect users based on interests and personality traits, not only looks. To promote the app from Washington DC, there’s a fairly new Instagram show focused on dating life, called S’More Happy Hour. Episode 44 featured Joy Taylor, who’s a host on Fox Sports and The Herd with Colin Cowherd.

There are a few technical difficulties at the beginning of the episode. These episodes are live, which is good for spontaneity but can create a few technical hiccups. Once the episode finds its groove, though, it finds a strong guest in Joy Taylor. She’s entertaining, both a good host and a guest for a show. Out of over 40 episodes, Taylor is one of the show’s most entertaining and informative guests yet. She’s just naturally charismatic, no matter the subject matter that comes up.

Taylor is first asked about one of her worst dates and shares a unique experience from a wedding that leaves you cringing. When Taylor talks about her career, though, that’s far more fascinating. Taylor began her career in radio down in Miami. “At the time, radio gave you the opportunity to be a personality,” she said. “Growing up, you got attached to your local morning shows and feel a part of what was going on in the studio…. I started at the university radio station, which maybe 15 people listened to, but it was awesome. I produced my own show, learned how to do sound and record, and I still do radio every day.”

Taylor grew up playing a variety of sports. She kept playing through college, too, calling herself a “tomboy” in Pittsburgh, where everyone watches the local teams. Even High School football is big there. “For me, it wasn’t weird to be passionate about sports,” she said. Sports have always been a part of her life and for many years, her career.

Taylor opens up a bit about her dating life, which she handles very gracefully and tactfully, but the highlight is whenever she’s talking about her career. “If you ever watch sporting events, every other person in the stands is a woman,” she said. “It’s not an accident. Women are sports fans. It’s just the traditional image and demographic of a sports fan, sports radio, and sports television is male. You just gotta be better. You can’t be average or OK. I see what other men do in the business and say, ‘If I did that, I’d be run out of this business.’ I can’t be average. It’s unfortunate, because it takes longer to be where you deserve to be, be paid equally, takes longer to be offered certain positions, and there are still a lot of ‘firsts’ that have yet to happen.”

Taylor notes there are a lot of allies in the business, too, both men and women. “It’s a great space to work in,” she added. “I love supporting other women in the business. The more women there are in the business, the less it’s ‘a thing.’ It’s better for all of us.” Taylor is a great guest, sharing an equal amount of personal and professional information, although her thoughts on radio, sports, and the business at large are the highlight.