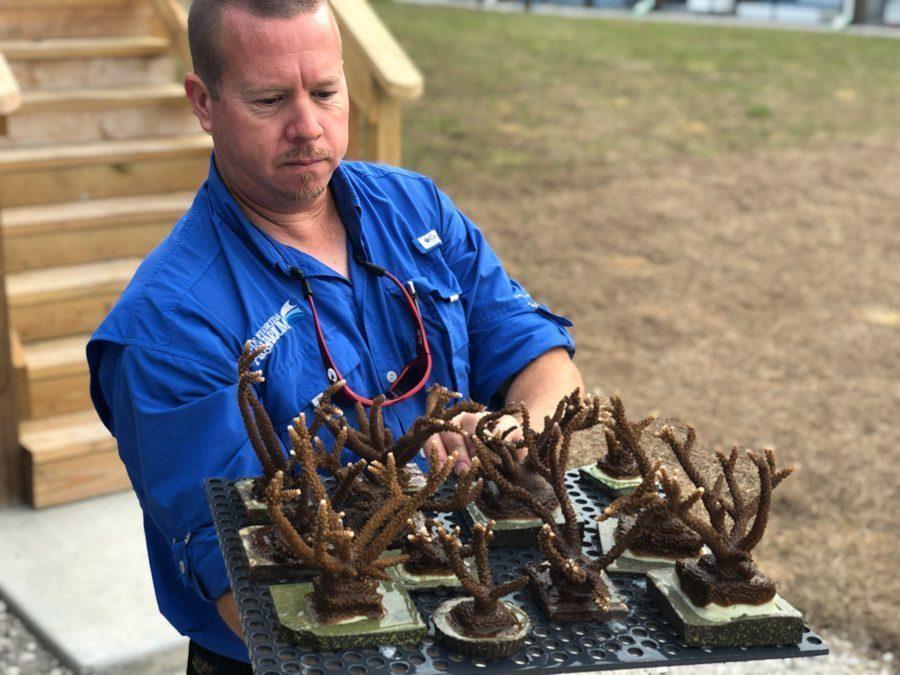 Scientists at The Florida Aquarium’s Center for Conservation in Apollo Beach, Florida have spawned the threatened Atlantic pillar coral for the first time in a lab.

Scientists first succeeded in spawning this coral in August and they will stay with the Aquarium until they are large enough to have a better chance of survival out in the ocean.

The aquarium is part of an effort headed by the Department of Commerce’s National Oceanic and Atmospheric Association (“NOAA”) to restore seven different coral reefs in the Florida Keys.

According to NOAA, 90 percent of the live coral that once used to live in island waters is now dead.

The project spans the entire length of the island chain on the southern side of the islands. The exact locations of these reefs are Carysfort Reef, Horseshoe Reef, Cheeca Rocks, Newfound Harbor, Eastern Dry Rocks, Sombrero Reef and Looe Key Reef.

“Mission: Iconic Reefs” will be completed in two main phases and is projected to cost near $100 million in the first 10 years.

To prepare the current reefs to receive the transplanted corals, scientists will clear the corals of different organisms that could hinder the corals’ growth.

This includes algae and invasive species that have the potential to take over.

In the first phase, scientists will establish about 15 percent of coral cover. They will do this by first planting elkhorn corals as it is more hardy against common diseases.

After these are in place, scientists will plant star, brain, pillar and staghorn corals in with the elkhorn coral.

To supplement the clearing that they did in the beginning, they will also bring animals like sea urchins and caribbean king crabs to eat away any algae that could be overcrowding the coral and causing it not to thrive.

Moving into phase two, they will continue planting the coral already mentioned but they will also begin planting stony coral.

Finger and blade coral are some of the types of stony coral that are expected to be planted.

Several different organizations and aquariums across Florida and elsewhere are contributing including Mote Marine Aquarium, the Coral Restoration Foundation and the University of Florida.

The aquarium, based in Tampa, Florida, is growing this coral in Apollo Beach at their Center for Conservation.

The new breakthrough is a part of the aquarium’s “Project Coral.” Project Coral is working to spawn corals in a lab to replenish wild corals that have died.

London’s Horniman Museum and Gardens is partnering with the Florida Aquarium to accomplish this goal.

Coral in the Keys

Florida is the only place in the continental U.S. to have a living tropical coral reef system, according to World Seas: An Environmental Evaluation.

In the last few decades, corals have been under more stress than ever due to warmer conditions, according to an article in Scientific Reports.

Luckily for NOAA, the author said that the Atlantic is the slowest warming body of water. In contrast, reefs in the Pacific and other oceans have coral that is under much more stress.

Corals here have less periods of extreme stress due to heat and if grown and planted will have a better chance of survival than they would in other areas of the world.

Success in Other Reefs

Even with the temperatures, a team in Australia worked on something similar to try and help a part of the Great Barrier Reef get back on its feet.

In Australia, young corals were transplanted into Opal Reef in August of 2018.

In this case, however, marine biologist David Suggett simply collected bits of partly bleached coral and grew them on nearby in the ocean. Suggett and his team transplanted them after they grew large enough to survive.

When the Suggett checked on them they were doing well but he worries how they will do if several major warming periods happen too close together.