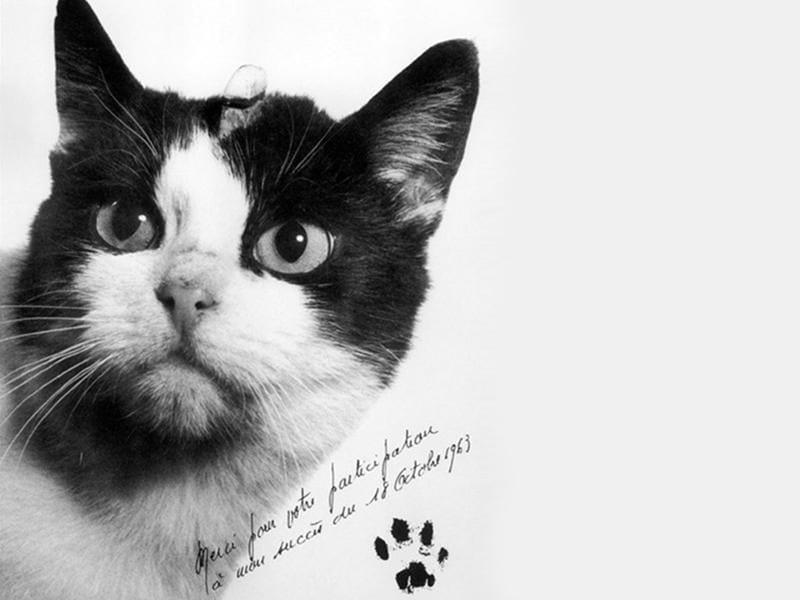 Félicette, the First Cat in Space Gets Special Memorial In France.

They say a cat has nine-lives. But for Félicette , she has something much more.

Félicette, the first cat to ever go to space, got a memorial last month with a statue debuted to the public at the International Space University, located in Strasbourg, France.

With good reason, of course: she is the only feline to ever survive a temporary stay below planet Earth’s orbit. The feline formed part of a 15-minute French mission back in October 18h, 1963.

Said memorial is the pinnacle of a project launched in October 2017, by aficionado Matthew Serge Guy. According to the Smithsonian Magazine, about 1,100 supporters donated $57,000 to honor Félicette. And even though she died two months after said mission, her importance is best explained by Guy:

“It’s time for The Astrocat to get the memorial she rightly deserves,” Guy wrote on the original campaign page.

Part Of The Movement

The famed tuxedo cat wasn’t the first mammal to engage on a pseudo extraterrestrial mission. During the start of the space races, both the United States and the former USSR sent their own chosen creatures into space, including a dog named Laika in 1957 and a chimpanzee called Ham in 1961.

These trials, using bigger and bigger animals, were intended as tests for humans, “in part to study the effects of micro-gravity on mammalian.”

The figurine is found inside the Pioneer’s Hall at ISU, and it displays Félicette resting on top of planet Earth, with her eyes fixating on the stars. The statue shares a room with one of Yuri Alekseyevich Gagarin, the first Sovietic man in space.

Space.com states that the revealing of the statue took place on the 25th anniversary of the university’s Master of Space Studies program, on Dececember 18th.

They participated in the ceremony with Lilla Merabet, VP of the Grand Est region in France, and Philippe Jung, chairman of the History Council of the Aeronautical and Astronautical Association of France and co-author of the academic paper “Félicette, The Only Space Cat,” which was showcased two years ago during the International Astronautical Congress.

According to Emily Petsko, on Mental Floss in 2018, France used to only send rats to space. Soon after, scholars at the Centre d’Enseignement et de Recherches de Médecine Aéronautique (CERMA) recruited 14 cats to participate in the program.

A former stray currently known Félicette was eventually given green light to participate in the program.

Guy admitted that constant travel strikes across France prevented him and many others to attend that ceremony. He hopes to see the memorial there soon for himself, and is also “working to arrange an official event for backers — possibly coinciding with the anniversary of Felicette’s space mission in October,” said Jayson Peters on Geekdad.

Nevertheless, he is happy that the forgotten kitty has made a comeback into the mainstream world. The reason as to why any memory of her made its way into oblivion is partly because of the former candidates of the Cold War.

In the past, all journeys to space were centered around the contributions of the USA and the Soviet Union. Which meant that other entities, such as France and its astronauts, were made into secondary characters. Historian Robert Pearlman told Rae Paoletta at Gizmodo in 2017 that “Félicette doesn’t have a path to that larger history.”

I don’t think that will be the case anymore, however. Thanks to sculptor Gill Parker, Félicette is now anchored to earth for hopefully all eternity. Cat people may now rejoice.