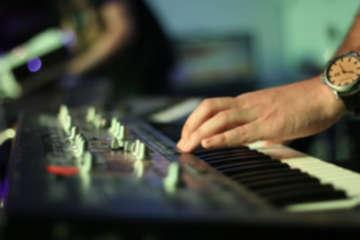 Who said the environment and music have nothing to do with eachother?

In an attention-grabbing effort to protect both artists and the environment, this music streaming startup believes it can do both, while creating its own market away from music streaming giants, Apple Music and Spotify.

Feedbands is an environmentally friendly streaming music service that pays artists in Bitcoin, and plants trees in exchange for streams from customers.

Unlike Spotify, which is known for not being the most “artist-friendly” platform when it comes to royalties, Feedbands pays artists 1 cent per stream (slightly more than double of what Spotify pays out), in Bitcoin.

I spoke with the platforms CEO, Graham Langdon, who told me the platforms main vision is to turn music streaming into something that directly fights climate change.

GritDaily: Why do you think this platform is able to thrive?

Graham Langdon: Our members love participating and directly influencing the success of artists on our platform with their votes.

Langon indicated the inspiration behind Feedbands came from Ecosia, a search engine that returns the same results as Google, but plants trees as people search.

“They’ve planted over 50 million trees, and they’re planting another one every second. People are actively choosing services that have a regenerative impact on the Earth. It’s a movement that is happening now at the intersection of technology and the environment.”

A Fragmented Industry Yields the Need for Democratization

There’s no question the music industry is fragmented. Since music became digitized with services like Kazaa, Limewire, and Napster, the music industry has been in an everlong battle to preserve the intellectual property rights of artists.

Over the years, we’ve seen the struggle between artists and streaming platforms when it comes to hosting content, most notably Taylor Swift and Jay-Z, who eventually started his own music streaming service, Tidal.

But if there’s anything to take away from these occurrences, it’s that music needs to be democratized in a way where content is still protected while the artist is appropriately compensated, in real-time.

“Feedbands is dedicated to helping fix the broken economics of the streaming industry that overall disadvantages artists,” Langdon told me. “We want to create a platform that works in favor of the artists.”

Implementing the need to democratize both streams and distributions, the company began beta-testing the Lightning Network that helps to pay streaming royalties in real-time:

“Artists will no longer have to wait months or years to receive their streaming royalty; they get it in real-time. Lightning Network not only makes micro-payments possible, but it makes micro-payments affordable, typically charging only 100 satoshis to make a transaction.”

These economics, according to Langon, allow the company to pay artists per stream at the time the stream actually occurs, whereas before this wasn’t an option.

Langdon poined out that most of the platform’s users also use Spotify.

GD: Why do you think listeners have a soft spot for Spotify?

GL: We think that people use Spotify to listen to artists they already know and love. With our platform, we believe Feedbands is ideal for finding and discovering new artists, because we exclude all major label music on our platform.

But, with all new technologies, especially cryptocurrency, it can be a bit challenging to educate on. The biggest challenge, according to the CEO, has continued to be on the education front.

“Educating our listeners and artists about how Bitcoin works, has been our biggest challenge, and still is. It’s scary new technology to those individuals who have never used it before, but want to start.”

I think this entire project is an actual use case for Bitcoin. Lots of artists want to earn Bitcoin but don’t want to buy it. Now they can sign up for Feedbands, plug in a Bitcoin address, and start earning Bitcoin passively as people stream their music.

GD: How do you get up and running to earn Bitcoin?

GL: I think this entire project is an actual use case for Bitcoin. Lots of artists want to earn Bitcoin, but don’t want to buy it. Now, they can sign up for Feedbands and plug in a Bitcoin address. Once that’s done, they can start earning Bitcoin passively as people stream their music.

Despite the challenges ahead, the company continues to succeed by providing the necessary resources to innovate in a space that is arguably, over-saturated.

The company has released over 70 artists on vinyl, which through its vinyl program, has been around since 2013.

Spreading Good Vibes Throughout the Environment

GD: What about Trees For the Future did you like that yielded this partnership?

GL: Climate change is very real, and it is not too late for us to do our best to address it. Our partnership with Trees for the Future allows us to actually and physically plant 1 tree for every 100 streams on our platform.

The company, having been active for a few weeks now, has already planted over 4000 trees, Langdon emphasized to me. “By planting this large number of trees, we will be removing over 4000 tons of carbon dioxide from our atmosphere. We know this is a small number, and really we want to encourage all companies to adopt a plan like this.”

Langon added that the company’s ultimate vision to become an actual use case for how Bitcoin can be used to fight climate change,