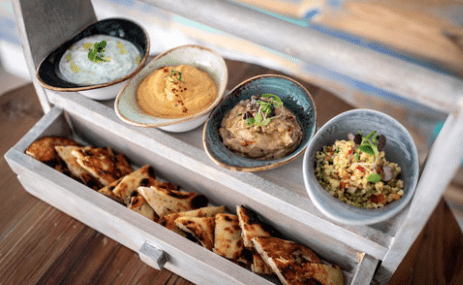 The West Village has a new tenant that’ll make you feel like you’re on a Greek vacation in the middle of winter – Fava Bistro. The cafe’s atmosphere is suitable whether it’s a date night or cocktail night with your buddies. But most importantly, the food is beautiful; and the menu full of Mediterranean classics with a modern twist.

Despite naming his restaurant after an Italian bean, Andrea Rodrik, the owner and restauranteur behind NYC’s Fava Bistro doesn’t do typical menus because he insists that you can’t replicate food from Europe – “the ingredients will always be different.” Rodrik himself is Swiss and Turkish and prides himself on always being a food fanatic since childhood. He knew he couldn’t replicate his Grandmother’s Turkish goodies, so opted to open an eatery serving something totally different.

Starters include Saganaki, which is panko-fried halloumi cheese that’s drizzled in honey, a gorgeously-Instagramable twist on a traditional “flaming Greek cheese” dish. There are also spreads of hummus and baba ganoush, calamari, and octopus for the city’s many seafood lovers.

The executive chef divided the rest of the menu between Land and Sea – giving visitors a nice choice between conventional (but not!) fish dishes from Greece, like the black bass or daily market fish. The land portion of the menu has the “7” Smash Burger, which includes Andrea’s secret sauce and is already getting hit ratings around the internet.

In the West Village, a restaurant is nothing without atmosphere. Fava Bistro’s white walls, turquoise accents, and soft lighting will transport you to a different place, at least for a few hours. Combine that with the cocktails, and you’re in for a great night. 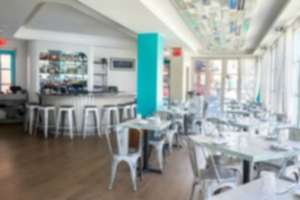 Fava Bistro also starts opening up for brunch in the West Village beginning this Sunday, the 15th, and the menu is sure to hit all the right notes. Classic brunch dishes with a Mediterranean twist, like avocado toast (with pickled onions, jalapenos, and smoked fish), brioche french toast topped with caramelized apples, and charred steak-and-eggs are set to premiere this weekend. The brunch classics will be alongside some interesting specialties that you’ll only see at Fava Bistro. The Fava Bistro Benny-Benny looks like it’ll be a breakfast win with garlicky spinach, ham, and poached eggs with harissa hollandaise. The Lamb Merguez sausage hash has a creative spin and incorporates delicious roasted Brussels sprouts, harissa aioli, and red potatoes. Check the rest of the brunch menu to see the complete list of goodies being served.

There’s also a happy hour, so don’t forget that. Monday through Friday, from 5-7 pm, Fava Bistro will be serving up snacks and $7 cocktails at the bar. That includes a daily selection of beer and wine, a house-made sangria, a signature Fava sake, and a few other carefully arranged drinks that’ll keep you hooked.

Opening Fava Bistro, Rodrik mused, “I want people to have fun. It’s my restaurant and it’s everyone’s restaurant.” In fact, the cafe’s name came to him on a whim. At some point, while getting the place ready, Rodrik was going through the inventory when he noticed that he ordered fava beans rather than farrow, and fell in love with the name right there. The fun-loving attitude towards food is what sets Rodrik apart from other owners. Always inspired and never defeated, the owner has big dreams for Fava. Rodrik wants to see Fava Bistro expand into other cities, and have its own line of coffee and ice cream.

Published in Entrepreneurship and Life