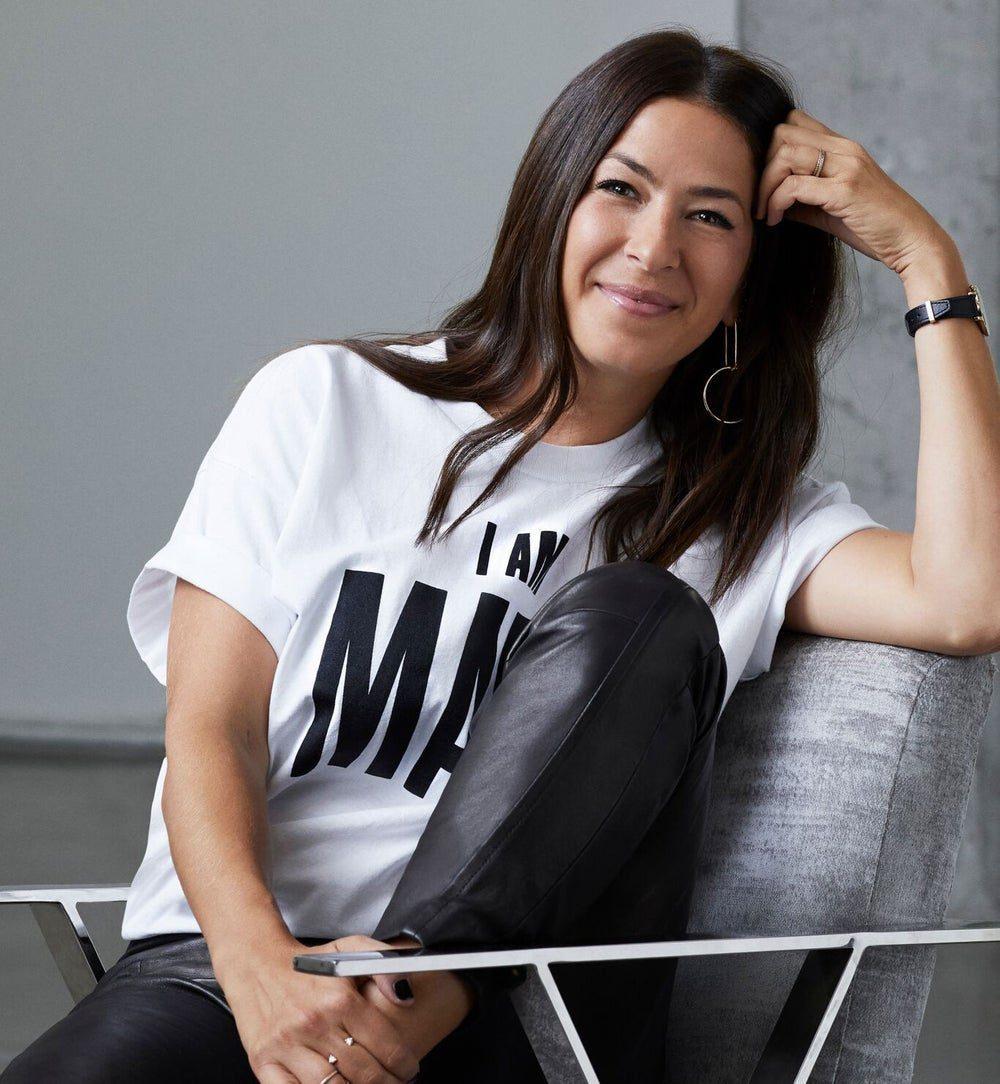 “You have to have a very clear perspective on what your brand is.” There’s going to be times you’re distracted by the opportunity in the short-run.

As a founder, you have to be able to judge what opportunities are right and which ones are not.

Going off the path is the death of the brand. Rebecca Minkoff knows what it means to build a premium brand with staying power.

Starting with just one purse in 2005; now a global brand with 55 employees, 4 domestic retail stores, 8 international locations and in over 500 retail stores, not to mention nearly 9 figures in revenue.

She knows what it means to build a premium brand with a bright future.

Rebecca’s love for fashion began in high school when she designed clothing for the costume department. She was first noticed when Jenna Elfman wore her version of the iconic “I Love NY” t-shirt on the Jay Leno show only days after 9/11.

After the TV spot, there was an overwhelming demand for the shirt. Rebecca spent months personally hand making the shirts to fulfill the orders.

In 2005, Rebecca designed her first handbag, which she soon dubbed the “Morning After Bag,” a.k.a. the “M.A.B.” After her excitement from the “I Love NY” t-shirt, Jenna Elfman asked her to produce a one of a kind handbag for a movie role. However, due to shipping problems, the bag never made it into the film.

Rebecca was left with a few copies of the newly designed bag; women would literally stop her on the street and ask where she got the bag. She knew she was on to something. A friend helped get it out on a popular email list about what hot in fashion; it took off.

This iconic bag ignited Rebecca’s career as a handbag designer and inspired her edgy, feminine creations in the years to come.

“I think that you have to have a very clear perspective on what your brand is, its values, what it stands for. Where your white space is on your Venn diagram, and you have to hold you to that. I think where we have,  gotten into trouble as a company is when we err or we listen to a new person that comes in and thinks they have the Magic Bullet.

There is no magic bullet that I’ve seen and so I think you have to just stay consistent to why you exist in first place and make sure that you never hear from that because your customer is is coming to you for a reason and start changing your story. You’re going to lose her. And so I think it evolution is obviously needed as businesses change in the way you reach your customer changes, but like your brand promise and your reason for being should remain the same.”
– Rebecca Minkoff

To take the company to the next level, Rebecca partnered with brother, Uri Minkoff, now the company’s CEO. She has credited Uri with being able to see the right trends in technology that has allowed the Rebecca Minkoff Company some unique opportunities to grow; including releasing their wearable the same day as Apple’s iWatch.

After four years of designing statement-making handbags and accessories with her trademark leathers, studs and hardware, Rebecca returned to her roots of apparel design and introduced her first ready-to-wear collection in 2009.

The brand has four domestic retail stores, eight international locations, and is distributed in over 900 stores worldwide. In 2011, Rebecca won industry recognition when she was awarded the Breakthrough Designer Award from the Accessories Council.

She is an active member of the CFDA and supports multiple philanthropies including Jessica Seinfeld’s non-profit, Baby Buggy. In August of 2017, she was announced as a member of the first-ever New York State Council on Women and Girls, in the company of other female industry leaders including Refinery29 founder Christene Barberich, SoulCycle CEO Melanie Whelan and Deloitte CEO Cathy Engelbert.

In September of 2018, she established the Female Founder Collective, a network of businesses led by women that invests in women’s financial power across the socioeconomic spectrum by enabling and empowering female-owned businesses.

In addition to networking opportunities, members place the Female Founder Collective mark on products to show they are women-owned and allow others to vote their support through their buying power.

Rebecca Minkoff joins me, Jeremy Ryan Slate, on the latest episode of the Create Your Own Life Show.