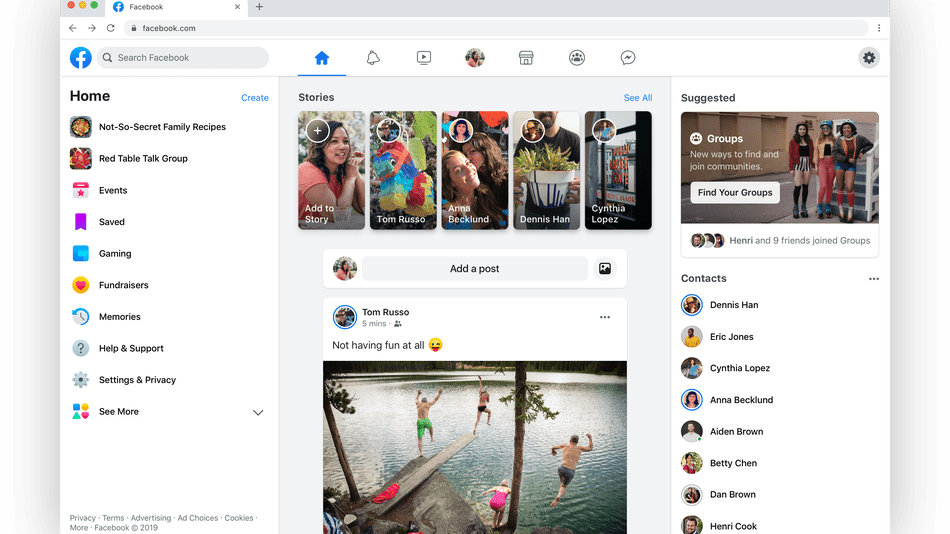 It’s been nothing but scandal after scandal for Facebook over the last couple of years. Now, the social network is looking to rebrand its image—both IRL and URL. But first, its employees threw a massive hotel party to celebrate.

The announcement for the redesign came on Tuesday. It will mark one of the biggest changes in the social network’s appearance since launching almost two decades ago. To follow the announcement, Facebook threw a fancy party at a luxury hotel in the Bay Area. The party offered tons of swag adorned with a new slogan, “Facebook equals communities since 2019” (billions of dollars and that’s really all they could come up with?). This was in between glamorous activities like massage tables, poker games, an open bar, massive sushi platters, and karaoke. The party was pretty hush-hush, but it reflects the dawn of a new era for a company that’s struggled to maintain a positive image for a few years now.

Perhaps the redesign is simply meant to distract Facebook users from all of the bad. Or, perhaps it signals a genuine attempt on the company’s part to regain consumer trust. The first major scandal to cause a shift in consumer trust in the company was Cambridge Analytica. Which revealed that millions of users’ data was being used against them in political warfare propaganda. The scandal forever changed how people would look at Facebook and other social networks. Beyond that, the company was forced to work with the government to determine whether or not there should be greater regulation on social media companies and how they acquire and use data.

After that, it was only downhill. Facebook revealed recently that it had played a role in the spread of hate speech against the Rohingya people of Myanmar. The Southeast Asian country is currently in the middle of a nasty genocide against its own people. The social network acknowledged that it may have played a part in fueling hatred against the minority group over the last couple of years. It didn’t have a way to identify Burmese hate-speech, leaving the network open to misuse. The company is now working with experts on the issue to develop a strategy. The new strategy will work to identify and remove hate-speech among Burmese accounts. But it doesn’t stop there. Facebook’s data breaches, email scandals, and bad publicity run deep, and almost constant, for the last couple of years.

The new redesign for Facebook’s website was revealed at its annual conference, F8, on Tuesday. When the design goes into place, users will notice that it will look a lot more sleek with an emphasis on new features like Stories. The redesign also gets rid of Facebook’s iconic blue menu banner, which has been a part of the website since it was launched 15 years ago. Now, with an emphasis on stories, users will see that the home page is a lot more sleek than it used to be. It may take some getting used to, but it’s a lot more visually appealing.

Following their “Facebook equals communities since 2019” slogan, users will also be able to post directly to user-created groups from their home page news feed. This signals that Facebook is trying to greater establish a sense of community within the site. It also opens up its potential as an interest-based social network in the ways that Instagram and Twitter currently operate. The new version of the mobile app will be available as soon as possible. The desktop version, however, will see a slow roll out over the next couple of months.