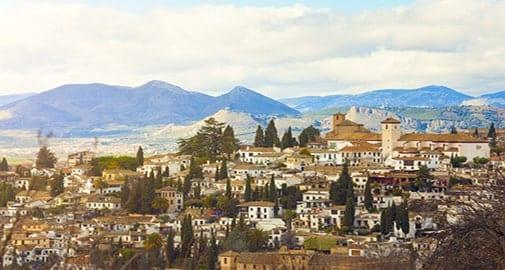 Growing up in California, Margalit Chu was surrounded by all things gastronomical. Her mother taught Chinese banquet cooking, and her best friend’s family grew gourmet coffee and edible flowers.

As an adult, Margalit would go on to work at several celebrated dining establishments in San Francisco’s East Bay. So when it came to building a new business in her adopted home of Spain, an eatery was an obvious choice.

Margalit fell in love with Spain after spending a year in the town of Cazorla as a high school exchange student. “I was fascinated with Mediterranean culture, and California’s affinity with the Spanish language made Spain an obvious choice.”

After her exchange student experience, Margalit tried to make annual visits to Spain. During one of those trips, she reunited with her host family’s daughter, who proposed the idea of becoming roommates in the city of Granada, located in the country’s southern region of Andalucía. Once the two friends had moved in together, Margalit met her “life and business partner,” Valeriano.

Like Margalit, Valeriano had an extensive background in the culinary arts. Soon, the couple was dreaming up a business that would offer high-quality, artisanal, and local food to Granada residents and visitors.

“We wanted to open people’s palates to new possibilities by offering innovative dishes inspired by flavors from other parts of the world. Equally important, from a social standpoint, we wanted our café to be a neighborhood hub for people to meet, socialize, and always feel comfortable and welcome,” says Margalit.

Granada is a university town known for its rich cultural history. It is home to UNESCO World Heritage sites the Alhambra palace, the Generalife palace, and the medieval Moorish district known as the Albaicín.

Margalit and Valeriano built their business, Café 4 Gatos, on the lower floor of their home, which is located on one of Granada’s main pedestrian thoroughfares. The street connects the Albaicín neighborhood to the downtown area.

“Depending on the hour of the day, you will find locals coming in for a quick coffee or breakfast on the way to work, tourists stopping by for a drink or leisurely meal, laborers stopping in on their short morning breaks or for an after-work drink, and expats and foreign residents having a long chat over a meal or pastries,” says Margalit. “I believe most of our locals know of us by word-of-mouth, while tourists tend to find us through social media or by happenstance while visiting the neighborhood.”

The compact café offers everything from homemade pastries to toasted sandwiches. “Our latest addition to the menu is an Asian-fusion pulled pork panini with Asian slaw and Sriracha sauce. We also have healthy or alternative food options such as muesli and fresh fruit, locally baked whole wheat bread, or soy milk,” she says.

Margalit says that Granada has a “lively cultural and social scene,” as well as a significant number of foreign residents living, studying, and working there on a long-time basis. “Granada is popular due to the fact that the cost of living is low and it has a fantastic nightlife. Tapas bars are plentiful and, as a university town, the streets are teeming with life.”

She’s also taken full advantage of living in Andalucía, the famed region comprising Spain’s entire southern coast. Over the years, she has visited the beaches on Cádiz‘s Atlantic coast and within Almería’s Cabo de Gata-Níjar Natural Park; the beautiful cities of Seville and Córdoba; and the mountains of Cazorla, Grazalema, and Granada’s own Sierra Nevada.

Still, Margalit is most inspired by the historic district of Granada that she calls home. “I am fortunate to live in the Albaicín, which feels like living in another era, with its cobblestoned paths, labyrinth-like pedestrian streets, and white-washed houses. I guess I am still enough of a foreigner, despite the years living here, that that magic is not yet lost on me.”

The article Expat Funds Her Life in Spain by Sharing Her Passion for Food by Tricia A. Mitchell first appeared on International Living.

Published in Entrepreneurship, Life and Travel