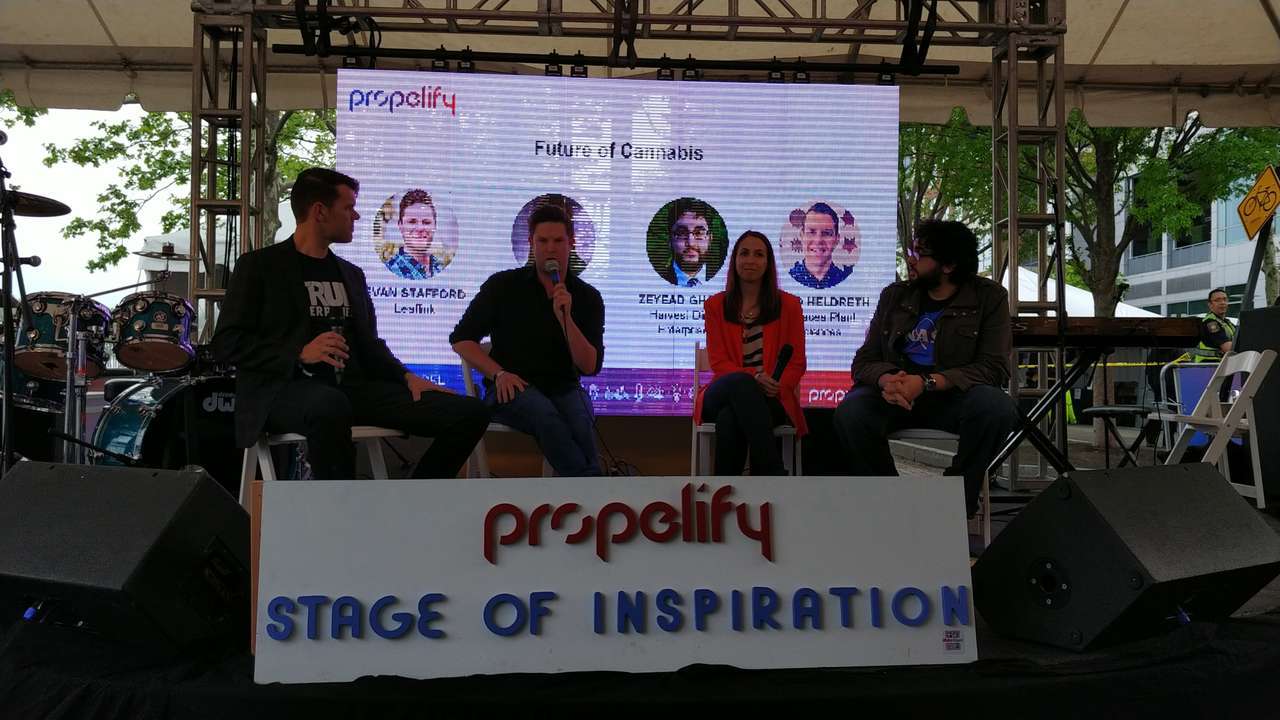 Events that Propel Past Normal

Located just across the river from Manhattan, is the waterfront of Hoboken, NJ which becomes the venue of Propelify Innovation Festival. That’s right, you read that right. A festival. Propelify is considered the most fun professional business conference and has been dubbed “The SXSW of the Northeast”. While the event is open to the general public who wish to see the latest and greatest in technology and hear from the successful folk in the industry, Propelify did a few things this year that really set it apart from mainstream tech-focused conventions and despite the rain, still managed to bring in a crowd of over 8,000 attendees this past May.

Many of us are already aware that Entrepreneur Magazine launched its pitch show Elevator Pitch in partnership with Indiegogo. To get on the show, you got a chance at a 60-second pitch to the Entrepreneur Elevate Judges at Propelify. Over fifty startup applied and pitched on-site the judges for a shot to get on the show for massive exposure. Companies of all sizes and industries give it their best and we have seen some interesting companies emerge from this. Gadget companies like WeatherAtPoint, which is the world’s smallest weather station, went in the ring after closing a very successful crowdfunding round last year. We even saw social-impact focused companies like Disrupt, a digital disruption agency looking to revive the digital economy in Puerto Rico with non-traditional tech education like development for blockchain, AI, and more. Anthony Delgado, CEO of Disrupt says “It was awesome to get the opportunity to pitch for Entrepreneur Magazine. Propelify is becoming such an iconic event for the east coast tech scene and it keeps getting better every year.”

Propelify worked with Techonomy to recognize entrepreneurs and companies focused on using technology to solve the world’s biggest challenges as outlined by the United Nations Sustainable Development Goals. One such applicant for the Humanity Heroes awards’ Climate Action category was CHOOOSE.today which was also a Richard Branson’s Extreme Tech Challenge semi-finalist. CHOOOSE is the fastest growing community of climate positivity in the world. In collaboration with the UN, they help individuals, companies, products, services or events offset more CO2 than they create. Propelify 2018 was the largest climate positive event in US history. By working together with CHOOOSE, they offset twice as much CO2 as each of the 8,000 attendees will leave behind for the day. On the attendees’ behalf, CHOOOSE purchased carbon credits, tore them up and threw them in the trash, making them unavailable for big polluters, and driving up the cost to pollute.

“After working with the UN to showcase startups addressing humanitarian issues in our Startup Humanity Heroes award, it made sense to position Propelify as one of the first climate positive events by partnering with CHOOOSE and offsetting the carbon footprint of every attendee for the day of the event.” – Aaron Price, CEO & Founder, Propelify

Future of Cannabis is Technology

More and more states are starting to legalize medical and recreational marijuana, and NJ is no exception. New Jersey Governor Phil Murphy is in support of legalizing the market in the state and is an avid supporter of innovation. He discussed many initiatives his team is working on as he delivered the keynote this year at Propelify. As an early move, before legalization is complete, we some cannabis involvement at Propelify with some out-of-state cannabis companies exhibiting. There was even a Future of Cannabis panel that started at 4:20 pm. Moderating the panel, was David Heldreth of True Terpenes, who is a cannabis science and education writer that has attended mostly cannabis-focused industry events. “Propelify was the first event I’ve attended for business that wasn’t a cannabis-centric event. As such, it provided a great way to engage new markets and get data/insights about the state and market from those with less exposure to the industry. That’s important as sometimes you’re too close to see things.” A challenge the cannabis industry faces is being segregated from mainstream outlets in media and events. Propelify is an early adopter of welcoming the cannabis community into the world of traditional tech entrepreneurship.

To add to the dynamic at Propelify, Deloitte was there hosting speed-dating between startups and investors, Sprint hosted a startup competition with $10,000 on the line for the winner, and Dell was there hosting Bingo games with a grand prize of a new laptop, which was won by a small, maybe 6-year-old girl. She may grow up to be a great programmer because of this event perhaps. With live performing artists playing through the grand finale fireworks, Propelify Innovation Festival is a tech conference like no other.