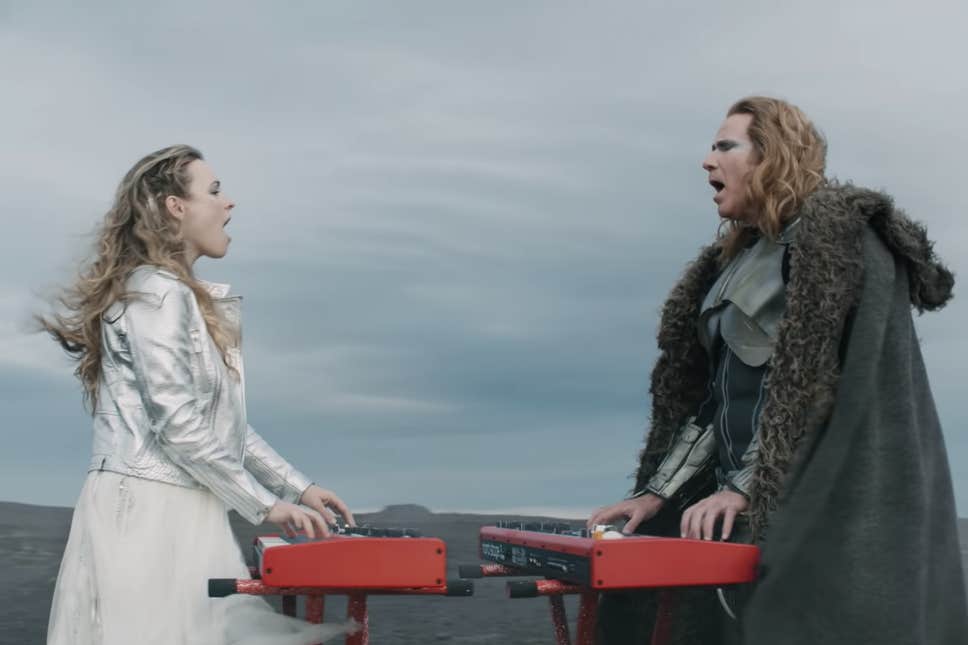 ‘Eurovision Song Contest: The Story of Fire Saga’ is an Overlong but Kind-Hearted Will Ferrell Comedy

Eurovision Song Contest: The Story of Fire Saga isn’t the great Will Ferrell comedy we’ve been waiting for these last few years. The comedy’s star’s most recent output hasn’t been as hilarious as his biggest hits. Get Hard, The House, and and especially the tonally awkward Downhill, they just didn’t have the laughs. Eurovision does, however, provide enough laughs with Ferrell playing one of his more endearing characters in recent years.

Ferrell co-wrote the Netflix comedy, which is directed by the director behind Wedding Crashers, David Dobkin. Ferrell and Rachel McAdams’ characters, Lars Erickssong and Sigrit Ericksdottir, have dreams of pop stardom. They are, however, a joke in their small Icelandic town. Their biggest audience is a drunken crowd at a bar. Never to be seen in the audience? Ericksson’s father, played hilariously by Pierce Brosnan, who proved his sharp comedic chops best in The Matador and The World’s End. The two wannabe but sincere pop stars get their big break via a fluke they get entered into the Eurovision Song Contest, much to their country’s embarrassment.

Eurovision charms most when it hits the sweet notes, when we see the two Iceland musicians truly in love with music and what they’re doing. They’re not the best of the best, but they make music for the right reasons. Ferrell, as a co-writer, does express some love for the act of performing that’s actually endearing. When Sigur Ros plays at the end, as corball as it is, it’s effective.

For a comedy, it has a good heart. There’s very little mean-spirited comedy in Eurovision. It’s even sort of refreshing to see the Russian singer (Dan Stevens), who would’ve been a straight up villain in most comedies, have a good side. It’s a sweet, if overlong, comedy. The love for singing and music is very charming at times, too. There’s a scene where everyone in the competition is singing together, having a great time, and it’s genuinely infectious.

Eurovision’s biggest problem is it’s self-indulgent. It’s not a story that needs two hours, like most comedies. Because of the leisurely pacing, there are jokes that miss the mark too often. At a brisk 90 minutes or so with only the best jokes intact, Eurovision would’ve been one of Ferrell’s better comedies. There are a few too many lulls in Eurovision, which doesn’t provide enough momentum or quickness for Eurovision’s funniest scenes.

At the end of the movie, though, charisma wins out. Ferrell and McAdams are a good pairing, and McAdams is such an undersung comedic performer. She’s entertaining when she plays the striaghtman role in a comedy, like in Wedding Crashers, or when she can play things up a little, like in Mean Girls or the excellent studio comedy, Game Night. Together, Ferrell and McAdams are a very watchable pair. They’re surrounded with an entertaining cast, including Dan Stevens showing off his comedy skills alongside Brosnan.

Eurovision Song Contest: The Story of Fire Saga isn’t another Anchorman or Talladega Nights. Not since the Anchorman sequel has Ferrell delivered a full-on laugh riot. Eurovision doesn’t have the biggest or the most consistent laughs, but it does have enough laughs to provide a good enough time. It’s a silly, kind, and overlong comedy that does entertain where it counts most.