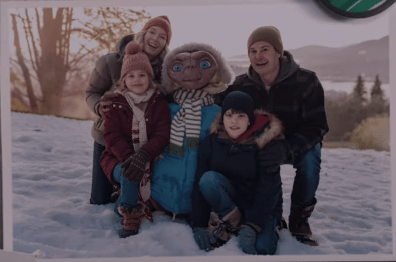 “You Came Back!” E.T. and Elliott Reunite 37-Years Later in New TV Ad and He Still Fits in the Basket!

With flickering lights and snow on the ground, nothing sends chills up and down your spine then seeing those two scrawny alien hands and grown-up Elliott running out and yelling, “You’re Back!” 37-years after saying goodbye to his long-time extraterrestrial friend, E.T.

On Thanksgiving, Xfinity broadcasted its new commercial, taking the holiday season to the next level, bringing four-minutes of pure nostalgia to Steven Spielberg’s 1982 classic, “E.T. the Extra-Terrestrial” back into our home — but this time, we see Elliott (Henry Thomas) grown-up with his family and kids, now introducing his extraterrestrial friend to his world.

But as Thomas explains to his old friend, “lots changed since you were here,” E.T. is forced to learn the world of smart technology, virtual realilty, and of course, the Internet! I think it’s safe to say that whether it’s a giant T-Rex running at him or swiping up on a giant screen, the 21st century is “out of his world!”

There’s no shame in letting those tears loose, especially as Elliott and E.T. embrace long after his kids are asleep—where E.T. shows Elliott his family, and Elliott warmly embraces him.

He Still Fits in the Basket!

To the Moon and Back: A New Generation

But if that doesn’t do it for you, just wait until you’re 3-minutes in, where Elliott’s kids are awoken, discovering E.T. to be in the shed, brushing over Elliott’s 37-year-old bike and the basket in which he was riding in, escaping from the clutches of the government.

With the sound of their kids’ laughter and discovering them to be outside—Elliott and his wife simply have to look out the window to see that bike once again, airborne—this time with their children riding the two bikes, and wait for it…E.T. right where he belongs, back in the comforting basket which once protected him. But don’t forget the famous instrumental orchestra performing the theme song!

A perfect illustration of what Spielberg hopes to bring to a new generation…a modern re-telling and sequel to the 1982 classic that this generation will soon grow to love, just as we had.

As the commercial ends, E.T. takes the children up to where his spaceship is, with Elliott and his wife not far behind—as he now watches (for the second time) E.T. depart, with E.T. pointing his golden finger at his son’s heart, reminding him that he will always be “right here.”

What an incredible gift for the holidays!

“The audience is going to get everything they want out of a sequel without the messy bits that could destroy the beauty of the original and the special place it has in people’s minds and hearts. It’s really a win-win,” Thomas said in a statement to Entertainment Tonight on Thursday.

You can watch the heart-warming commercial below: