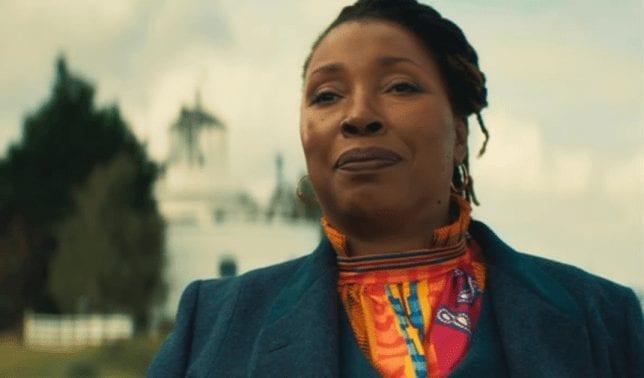 On Sunday, the long-running BBC series introduced actress Jo Martin as the first black incarnation of the show’s title character, The Doctor. In addition, she becomes the second female incarnation of this character; Jodie Whittaker joined the series as the 13th Doctor—the first female doctor in the series’s history—in 2018.

The next segment talks about the show’s latest episode, so if you don’t want to know what happened, consider this as your spoiler alert. But if you do want to know, keep on reading!

In Sunday’s episode, “Fugitive of the Judoon,” our current Doctor (Whittaker) went on to protect Ruth (Martin), a tour guide who is the target of the Judoon, a group of rhinoceros-like cops from outer space. Ruth later reveals that she is not really, well, herself.

They stumble across Ruth’s ship, an older version of the TARDIS. She then introduces her to The Doctor as… The Doctor. How could this work? How can there be two Doctors existing at the same time?

(For context to those who have not watched: When severely wounded, The Doctor can regenerate into a whole new character with a different face, life, etc.)

In addition, this particular Doctor has no idea about the sonic screwdriver and its significance. This leaves her more confused than ever and with zero memory of ever regenerating into “Ruth,” thus leading viewers to believe that this she is from an alternate timeline.

Without a doubt, Martin holding the role as the first black Doctor in the 57-year history of the series is a huge milestone. From the show’s premiere in 1963 to the reboot of the series in 2005, the role has always been held by a white, male actor and it was not until 2018 that a woman (Whittaker) served in the role.

Martin’s reveal as The Doctor excited many of the show’s viewers, many of who applauded the show for its historic move.

Martin retweeted fans and also joined in on the excitement about her new role, changing her profile picture in celebration.

What In The World Is ‘Doctor Who?’

The premise of the series revolves around the travels of an extraterrestrial being known as The Doctor, a Time Lord. This being takes the form of a human being and explores the many depths of the world in the TARDIS, a time-traveling space ship. In addition, they are often accompanied by a companion that helps in defeating a number of foes and saving the world from peril.

The series first premiered in 1963 and ran for 26 seasons before its cancellation. However, the BBC reaffirmed fans that the series would return, and it did indeed. A reboot of the series premiered in 2005, and confirmed that it would be a continuation of the plot from the original. Since 2005, The Doctor has been portrayed by Christopher Eccleston, David Tennant, Matt Smith, Peter Capaldi and Jodie Whittaker; as stated earlier, Whittaker made history as the series’ first-ever female Doctor.

As a longtime fan of the show, to see this kind of advancement puts a huge smile on my face. I cannot wait to see how Jo Martin’s role evolves throughout the season and show as a whole.

Doctor Who airs Sundays at 8PM on BBC America.