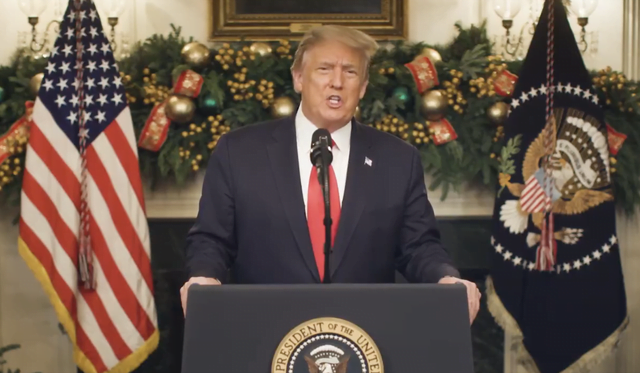 President Trump announced on Wednesday that he’s vetoed the $740 billion National Defense Authorization Act after threatening to do so on Twitter for the last couple of weeks. The President previously argued that the defense spending bill should include measures to revoke Section 230 of the Communications Decency Act, a law that enables freedom of speech on the internet.

The National Defense Authorization Act has been passed with bipartisan support for decades. The annual bill outlines defense spending for the upcoming year, and often includes things like spending for new military bases, pay raises for active military personnel, and funding for national defense. This year, the bill included funding for pay raises and a measure that asks for the renaming of ten military bases named after Confederate soldiers, which was introduced by Elizabeth Warren. The inclusion of the measure was a compromise between the GOP-led Senate and the Democrats to push the bill through.

The NDAA, which didn’t include changes or updates to Section 230 of the Communications Decency Act, became a target by President Trump who felt that he could use it to negotiate the addition of a measure to revoke the law. Trump, who feels that social media giants like Twitter are purposely censoring him on their platforms, has been extremely vocal about wanting to force social media giants not to censor his content.

However, the revocation of Section 230 may not provide that.

The law, which was created with the idea that internet companies could not possibly moderate all of the user-generated content, should not be held liable for any content published on their platforms. Where publishers can be held liable for false or illegal information, internet companies like social media giants do not consider themselves publishers, only hosting platforms. User-generated content (such as posts on Twitter and Facebook) are, under Section 230, given legal protection on behalf of the internet company—meaning that neither Twitter nor Facebook can be legally prosecuted for the content published on their site, even if it’s illegal.

There are some exceptions, such as child pornography, that enable internet companies to moderate the content on their platforms—but this actually falls into the protections granted by the Good Samaritan clause within Section 230 and not Section 230 itself. The clause allows internet companies additional protections to moderate content that might be illegal or unethical, enabling them to enforce their own terms of use. For example, there is no law saying that you can’t spread conspiracy theories—but social media giants have had to implement such rules in recent months after conspiracy theories threatened the fate of American democracy.

Solely revoking Section 230 would not enable Trump to post anything he pleases without facing censorship, it would simply force social media companies to begin seeing themselves as publishers—requiring them to moderate content before it’s published rather than after. President-elect Biden has also expressed interest in revoking Section 230, but for different reason. Simply revoking the law wouldn’t solve Trump’s problem, it might actually make it harder for him to disseminate false information about the election, as he’s done in recent months.

Senator Lindsey Graham introduced legislation earlier this year that would require Congress to reform Section 230 before January 1, 2023. The legislation doesn’t offer an immediate alternative—what would be needed to grant President Trump the ability to freely post on social media cites without fear of censorship—but it gives a hard deadline to come up with a plan. Graham posted on Twitter on Wednesday that he supports the President’s decision to veto the NDAA, and that Congress should include legislation on Section 230 as part of the NDAA in order to push it through as quickly as possible.

Congress can vote to override the President’s veto—and likely will—but the announcement creates another hurdle for Congress to overcome before the new year. With the nearly 6,000 page Consolidated Appropriations Act of 2021 (which includes the COVID-19 economic stimulus bill) also on the line, Americans will be the ones paying the toll for these hurdles.

Other members of Congress have spoken up against the President in response to the news of the veto. “Donald Trump just vetoed a pay raise for our troops so he can defend dead Confederate traitors. Democrats will vote to override it,” said Senator Chuck Schumer on Twitter on Wednesday afternoon.

“The President just denied our troops a well-deserved pay raise and deprived New England’s Portsmouth Naval Shipyard of significant federal investments,” said Senator Jeanne Shaheen of New Hampshire in a statement. “He also blocked important national security provisions to counter aggression from our adversaries like Russia and China and sabotaged other critical bipartisan measures that would safeguard our defense structures. All of this because he has a gripe with social media companies for holding him responsible for spreading disinformation on his social media platforms. This isn’t just shameful it is downright dangerous,” she said.

The bill also included spending provisions for cyber defense, and after a massive hack on state organizations like the U.S. Treasury and Homeland Security from what is rumored to be Russian hackers, cyber security has only become a more urgent need.

“The Kremlin is actively attacking our cyber networks. Instead of standing up for our national security, the President is downplaying Russia’s involvement – which contradicts U.S. intelligence – and now he just vetoed legislation that contains actionable items that we can use to hold Putin accountable for this kind of belligerent behavior,” Shaheen said.