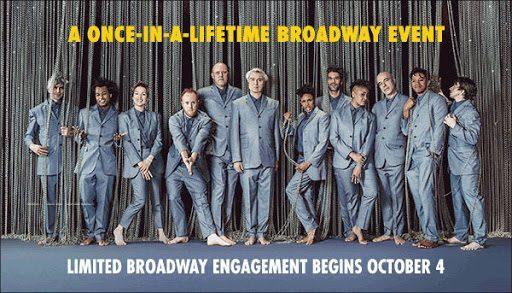 American Utopia is David Byrne’s latest masterpiece. It is pure imagination. Byrne’s first solo album in around a decade produced one of the most cinematic and exhilarating concert experiences of the 21st Century. It was next level. David Byrne’s show, American Utopia, had a huge run on Broadway and will return for more dates in the fall. After the album and the worldwide tour, Byrne is now writing an American Utopia book. Pre-order it immediately.

The book will be published on September 8th by Bloomsbury. Byrne’s hope is to capture the joy of the show in book form, as he said in a statement:

“Here is the hope and joy that I believe emanates from this show turned into something you can hold in your hand.”

Byrne has written books in the past, most famously “This is How Music Works.” It’s part music history, part Talking Heads history, and everything a music fan would want to know about the business of sound. Byrne also wrote “The Bicycle Diaries,” which is about the artist’s experience riding bikes in cities across the world.

Illustrator Maira Kalman is collaborating with Byrne on the American Utopia book. She expanded a little bit on the idea for the book in a statement:

“A reminder to sing, dance, and waste not a moment.”

What Exactly is American Utopia?

Byrne is the genius behind The Talking Heads. Since the band split, he’s put out a wide array of solo albums and collaborations with the likes of St. Vincent, Fatboy Slim, and Brian Eno. 30 years after his iconic tour and Jonathan Demme-directed concert film, Stop Making Sense, Byrne is still breaking new ground as an artist. He’s always exploring and pushing himself, as he did with American Utopia. The album was Byrne’s first solo effort in a while, and it didn’t disappoint. It’s packed with themes familiar for Byrne, especially the idea of home, and it gets the body moving. Whenever Byrne and his band performs songs from it live even on late night talk shows, it’s a singular experience.

For anyone not fortunate enough to afford a ticket to see American Utopia on tour, thankfully a movie is on the way. Byrne is collaborating with director Spike Lee on a concert film. We can’t wait to see how Lee interprets and visualizes Byrne’s epic treat for the eyes and ears. It’s such a visually and technically intricate performance, yet it feels so natural and spontaneous at the same time. The genius of Byrne.

A Message From David Byrne

We could all use a little more of David Byrne’s joyfulness in our lives, especially now. I know I’m not the only one who’s been dancing in his room to Byrne’s music lately to get some good feelings up and running. Outside of music, Byrne is always here for us.

Last year, he brought back his old website, Reasons to Be Cheerful, which focuses on good news happening in the world. It’s a glimmer of light in the cold, dark Interweb. Byrne writes articles on the site often, including his latest post, “The World Is Changing – So Can We”:

I went for a long bike ride today. I needed to get out and clear my head. The sun was shining, daffodils were emerging along the riverside bike path, dogwood trees were in bloom and at one point I thought to myself, “Yeah, life goes on.”

Pretty corny, and maybe even a bit selfish given what so many people are going through right now. But maintaining the basic rhythms of life that remain available can give one a sense of resilience.

I ask myself, is there something we can learn from this, something that will prepare us to better weather the next crisis, some different way of being that might make us stronger? Is this an opportunity to change our thinking, our behavior? How can we even do that? Are we capable of doing that?

If you want to read the rest of the post and get lost in the neverending mind of David Byrne, go to Reasons to Be Cheerful. It’s always a trusty and handy pick-me-up.