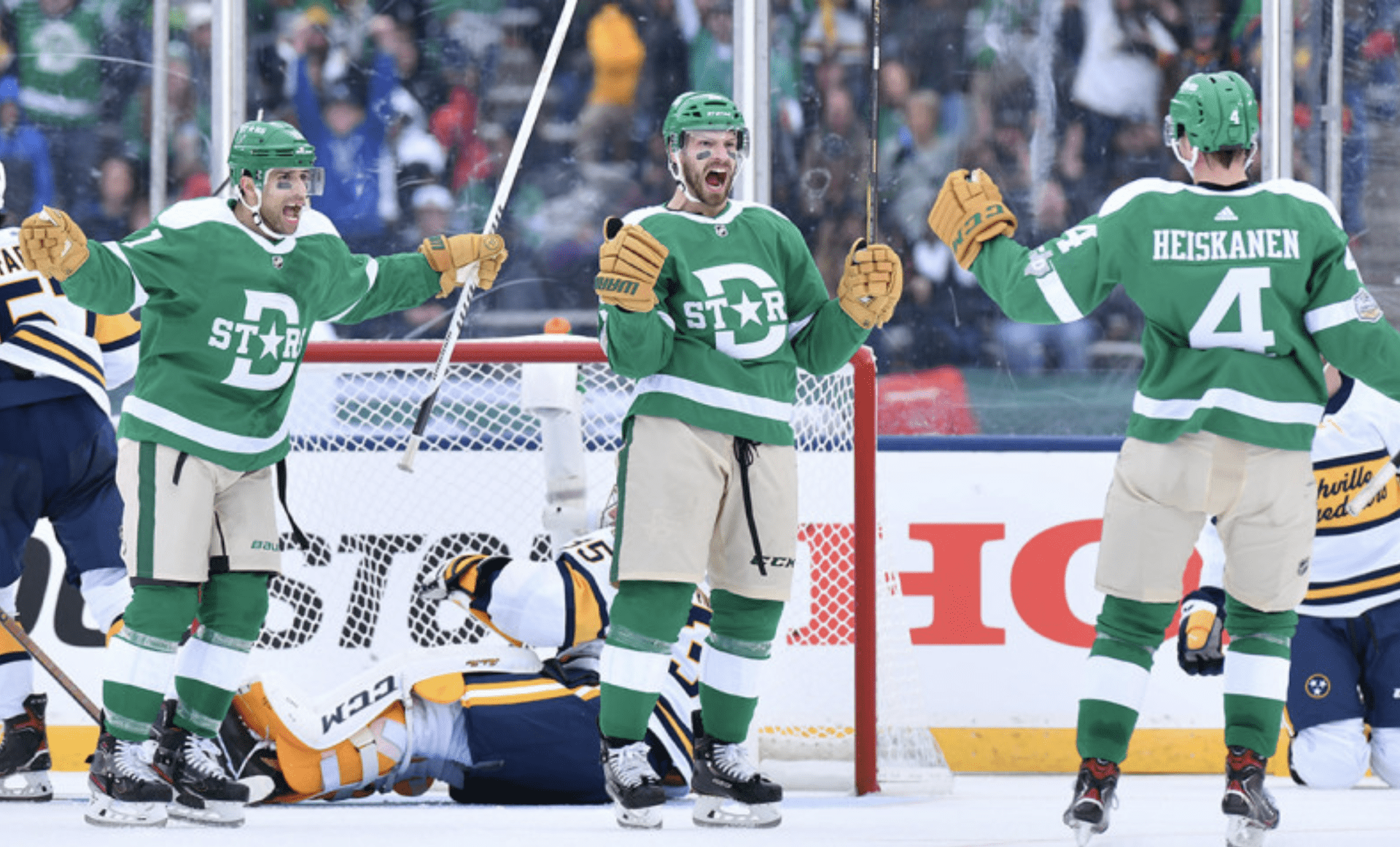 An event like this has never happened before in the great State of Texas. The Winter Classic is an NHL game played outside on New Years Day.

For the last decade, NHL teams of the North have consistently received the honors to host the Winter Classic.

And on January 1st, 2020, the city of Dallas broke new ground, and it sure as hell needed it. With 85,000 plus fans storming the Cotton Bowl to watch the Dallas Stars take on the Nashville Predators, fans were greeted with an epic showdown.

Penalty Trouble Put the Stars in an Early Hole

An unfortunate play for both Ryan Ellis and Corey Perry led to a long power-play opportunity for Nashville early in the game. A high elbow put Ellis on the ice, and led to a game misconduct for Perry. This, along with another penalty taken during this time for delay of game, gave a 5 minute power-play chance for the Preds.

First, it was Matt Duchene, who was sitting there alone on the backdoor of Stars’ goaltender, Ben Bishop. It’s hard to cover everyone on a 5-on-3 power-play, and players like Duchene know how to get open. He caught the pass and put it just passed the reaching glove of Bishop to take a 1-0 lead.

Then, in the dying seconds of the 5 minute power-play, they were able to send another puck in the net. This time it was the young defenseman, Dante Fabbro, who scored.

The puck was in tight around Bishop when Duchene sent the puck through a crowd to Fabbro, coming down from the point. He received the shot and beat a sprawling Bishop for a 2-0 lead.

This lead was taken into the 1st intermission. The Stars’ play improved after their penalty trouble, but they were not able to beat veteran goalie, Pekka Rinne.

The Stars continued to struggle to put up consistent offense through the second period. Blake Comeau was in the right place at the right time to end this flatlined hockey.

Esa Lindell broke the puck out of the zone and fed it to Jason Dickinson. He would take it into the zone and around the net. Comeau saw this and planted himself in front of Rinne.

Dickinson fed the puck to a wide open Comeau, who fires the shot right through the disheveled Predator goalie. As a result, the Stars cut the Nashville lead in half.

The score was 2-1 going into the 2nd intermission with all of the momentum swinging the way of the Stars.

Janmark Deflects the Puck Off His Leg to Tie the Game

The Stars started the 3rd period on a mission.

John Klingberg received the puck at the point and released a laser beam of a wrist shot towards Rinne. Mattias Janmark was there screening the netminder.

The puck bounced off of his leg as he was simply just trying to get out of the way, and it deflected in. The crowd exploded in joy, and because of that goal, the Stars had tied the game.

Radulov Fires a Rocket to Give Dallas the Lead

The Stars got another power-play opportunity not soon after Janmark’s goal, and they would take full advantage of it.

Jamie Benn got control of the puck and sent it to Klingberg on the blue line. Klingberg saw an open Russian sharpshooter in Alexander Radulov, and he fed it to him.

Radulov clapped the puck off of his stick and it beats Rinne, giving the Stars their first lead of the day.

The play begins with Mattias Janmark driving the puck into the zone on a 2-on-1 opportunity.

Janmark looked to pass it, but when he saw the pass wasn’t there, he hovered and waited for the right play. He ended up shooting the puck towards the net, and Radek Faksa had the puck bouncing between his feet.

The puck bounced free, and Andrej Sekera pounced. He chipped it passed Rinne on his backhand, giving him his first goal as a Stars, and the goal the Stars needed to close up shop.

The horn sounded and the fireworks exploded. The Dallas Stars won the Winter Classic over the Nashville Predators.