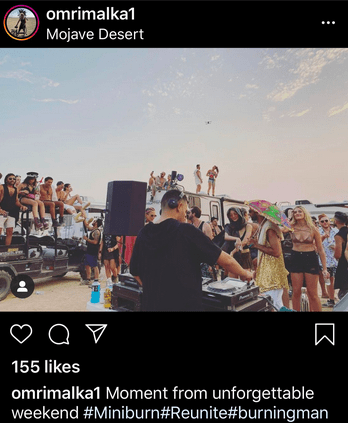 A camping event called Reunite Festival that took place in California’s Mojave Desert over the weekend is sparking major controversy on social media after videos and photos of the event have made their way online. The event, called Reunite, offered a come-one-come-all camping experience for displaced burners amid the cancellation of Burning Man, the annual desert event that would have started this coming weekend and lasted through the Labor Day holiday.

Originally Reunite was planned as a small camping trip for a group of friends that wanted to get together after a summer with no events. But after interest spiked in the weeks prior, it grew into a renegade desert festival—allegedly operating under the guise of a protest, according to several sources. The event, which played host to a pyramid-shaped stage area up against the backdrop of the pastel-skied Mojave Desert, was described by attendees as a “mini Burning Man,” though the event had no affiliation with the annual festival.

“I was really happy to go,” said one anonymous attendee that spoke to Grit Daily on Tuesday following the event. “We’ve been wanting to get together again and that’s why it was called Reunite—because it was supposed to bring us together. There’s a lot of sh*t going on in the world right now so it turned into ‘lets stand up for something’ so I was like ‘I’ll go out there and ill protest for what i believe in,'” the attendee says.

Some attendees that we spoke with believe that the event was a protest in support of Black Lives Matter, but not all agree that the event was protesting on behalf of a specific cause, and some claim that the event was in support of a sustainable future. “I was protesting for all of the environmental abuse that’s going on,” says the anonymous attendee, who posted a video to their Instagram page of themselves at the event telling people about the dangers of fracking and environmental abuse. “I don’t believe in fracking. Our groundwater is being destroyed for no reason. I was protesting to end slavery with love, just super simple things. We’re all one at the end of the day. Those are the key points that I wanted to make while I was out there and I think the message got received,” they say.

In text messages obtained by Grit Daily, attendees were told to bring protest signs just in case police showed up. “Please make protest signs and bring them with you as you will need them if law enforcement happens to show up and enter the property by using the COVID-19 quarantine laws as probable cause,” reads one message. California is currently facing a spike in COVID-19 cases, and gatherings have been prohibited by the State Health Advisor since mid-July. There is an exception for religious gatherings, cultural ceremonies and protests.

Overall, the event was created with the idea of bringing people together during a time of so much uncertainty and loneliness. “There’s a lot of people that were out there that feel the exact same way as I do [about the event being a protest]. We’re a really awesome, positive group of people that definitely want to see positive change in the world,” says the anonymous source. “Right now there’s a lot of misinformation and misdirection. A lot of things can happen but at the end of the day as long as you come with an intention of love and positivity then everything will be fine,” they say.

But not everything was fine. Part of the controversy circulating social media about the event focuses on an alleged overdose death that happened at Reunite. “Is it true someone died on a Fentanyl OD and everyone kept going?” wrote @hiddenhen on Twitter. Fentanyl, a controlled narcotic that is 50 to 100 times more powerful than Morphine, is often the culprit of street drug overdoses. When administered by a physician the drug is used to treat pain related to late-stage cancer, but when made illegally and distributed in drugs like cocaine and heroin to cut the cost of the drug and enhance its effect, it can be deadly.

The U.S. Centers for Disease Control estimate that Fentanyl and other synthetic opioids accounted for as many as 31,000 overdose deaths in 2018. At festivals, the problem is so widely acknowledged that Fentanyl detection kits are available online, and several harm reduction organizations offer Fentanyl testing to promote safer partying. Attendees at Reunite claim that there were no such services, nor was there a marked paramedic onsite at the event. “Reunite was mainly about healing and releasing collective traumas with the people you love while dancing,” says LeRome Swiss, an attendee at Reunite. “Someone snuck in with a heart problem that wasn’t suppose to be there & passed after enjoying his night with his best friends, which happens in this world—how do we react is the question,” Swiss says. Rick Silver, an organizer attributed to Reunite, shared a GoFundMe on Facebook to pay for funeral expenses for the deceased.

One source that attended the event argues that while the death has been attributed to drug use on social media, the cause of death is unconfirmed as no autopsy results have been publicly released. Neither the event organizers nor the victims family have released a statement to confirm the death occurred at all. The source claims that the victim had a heart condition that could be attributed to their death. The body was allegedly moved off of the dance floor and police put a barrier up around the deceased, though there was no medic onsite, according to sources that spoke with Grit Daily. “I do think it was really dumb not to have a medic onsite, especially with the heat,” says one person that was in attendance over the weekend.

The Kern County Sheriff’s Office responded to a request for comment from Grit Daily and confirmed the death that occurred at the event. “On August 22, 2020, at 5:40 a.m., the Kern County Sheriff’s Office responded to a report of a subject who had fallen down and was not breathing at an event in the area of 138th St East and Proctor Blvd, which is between California City and North Edwards, in eastern Kern County.  Deputies responded along with an officer from the California City Police Department and Liberty Ambulance.  They located a 53 y/o adult male who was unresponsive and not breathing.  CPR was performed, but the subject passed away.   The coroner responded and took over the investigation.  The cause and manner of death are still pending, awaiting toxicology results,” said Lieutenant Joel Swanson of the Kern County Sheriff’s Office.

Videos on Instagram depict the event organizers speaking onstage at the event. “I know we’ve all been needing this and needing this release from our bodies. It’s been really powerful. We had some ups and downs this weekend,” says organizer Brooke Chenery in the video.

Despite those ups and downs, though, attendees report feeling safe and comfortable at the camping event that took place near California City in the Mojave Desert. “Everyone got a free personal hand sanitizer that was branded Reunite, you were encouraged to get a [COVID-19] test within a week of the event and everyone had to sign a waiver upon entering,” one attendee says. “We’re all adults, we all make decisions,” says another attendee. “I got COVID-19 tested before I went and I’ll get COVID-19 tested after and I guarantee that I’ll come back negative. We live in the United States and we’re all adults so we have the right to choose what we want to do,” they say. Despite photos circulating social media, attendees report that many people wore masks to the event—but added that it was to protect themselves from the dust rather than as a COVID-19 precaution.

Tickets to the event, attendees say, were sold on a tiered basis, with the first tier starting at $50 before going up to $100 per ticket once the event had a greater demand. Reunite operated solely on word of mouth marketing, and people were invited to the event via friends that were also planning on going. Attendees agreed that Reunite was transparent in where the ticket money was going, and felt that the price was fair for the production.

A list of alleged performing DJ’s is circulating Twitter, but several artists on the list have denied being involved with the event. “I don’t think I should say anything about anyone who played there just because they’re getting a lot of flack from the music community,” says a source to Grit Daily. “At the same time there’s people playing parties from around the world,” they say. One DJ named Ofier that played at the event has spoken out on Instagram to apologize for attending and playing Reunite.

Renegade dance parties have garnered widespread criticism in recent months, but are happening around the world each weekend. Just last week, Los Angeles Mayor Eric Garcetti announced that he had shut the utilities off in a popular TikTok creator mansion after the residents went viral for several out of control parties held at the mansion.

“Overall it was super healing,” says LeRome Swiss. “We were able to deal with death & the emotions that come with it—fear, anger [and] pain [and we] turned them into finding new ways to heal like raving and dancing together and sound healings and meditation. [We were able to find] solutions to figuring out how to let go [of] all of the emotional trauma we are all dealing with since COVID,” Swiss says.

Grit Daily has reached out to Reunite Events for comment and will update as necessary.