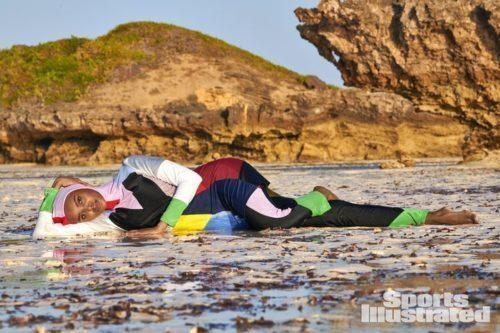 Halima Aden wore a burkini for Sports Illustrated’s Swimsuit issue, which is a big first for the magazine. They’ve been working on increasing representation for a few years now, featuring more plus-size models and covering feminist issues on their site.

Halima Aden has made her career out of being first – she gained fame when she became the first participant in the Miss Minnesota pageant wearing a burkini for the swimsuit portion. The Somali-American model was also the first hijab-wearing model on the cover of Allure.

Sports Illustrated editor, MJ Day, clarified why they chose Aden to headline their feature Swimsuit issue and spoke about the shifts they’ve made in an attempt to feature more diversity.

“Having Halima as a part of SI Swimsuit is yet another example of the range and scope of the type of beauty that exists,” Day explained. “Her participation and inclusion further highlights the brand’s commitment and belief in supporting women to own who they are and what makes them unique and ultimately reaffirms what our messaging has been, that YOU are worthy.”

In a time when the beauty industry is deciding to either shift or lose money (Victoria’s Secret, ahem), Sports Illustrated realized they must evolve as well. A huge part of American culture, both women and men have looked to the Swimsuit issue as featuring the ideal humans – toned and cut athletes that look nothing like us. As media continues to photoshop everything – celebrities and the public is fighting back against the un-realistic images that cause so much psychological harm to many individuals.

Aden says she’s thrilled to participate in the issue.

“Being in Sports Illustrated is so much bigger than me,” Aden said. “It’s sending a message to my community and the world that women of all different backgrounds, looks, upbringings can stand together and be celebrated. This is a moment, that’s for sure. Women everywhere should know their differences are what make them beautiful.”

This is a big first for the magazine, which usually features the skimpiest bathing suits they can find.

“Young Muslim women need to know that there is a modest swimsuit option available to them so they can join the swim team, participate in swim class at school, and go with their friends to the beach,” Aden stated in a release. “Muslim girls should feel confident taking that step and doing so comfortably while wearing a burkini.”

Last year, Sports Illustrated featured Hunter McGrady, the curviest model they’ve ever had. Her message was similar to Aden’s.

“The fact that they’re using a curvy model for one of the model searches is beyond my wildest dream. I’m doing this not only for me, but for every woman out there who has ever felt uncomfortable in their body and who wants and needs to know that you are sexy.”