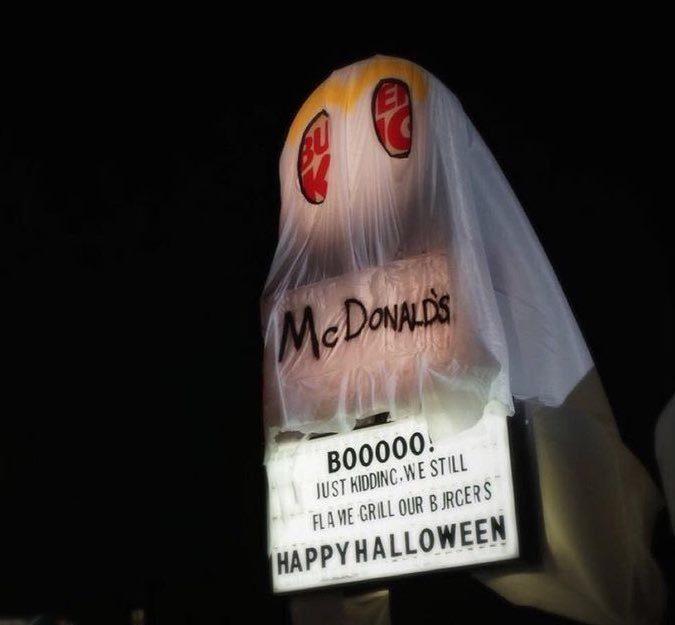 For Halloween, This Burger King Dressed Up as McDonalds—and it’s Hauntingly Beautiful

Back in September, Burger King and McDonalds came together showing the world that even two hard-core competitors can join hands…even for one day. Well, just in time for Halloween, a Burger King location in New York continued to show its undying love for its competitor by (jokingly) dressing up as McDonald’s…and it was hauntingly beautiful.

Last month, an Argentina Burger King launched its ‘Day Without Whopper’ campaign, where it stopped selling their top-selling Whopper for one day, in order to re-direct and increase sales to McDonald’s. The purpose behind the campaign was to help McDonald’s with their annual fundraising campaign of donating $2 million to Children With Cancer for every Big Mac and signature burger McDonald’s sold. Children With Cancer is one of many organizations that belongs to the Ronald McDonald House.

But, if you expect the love to just continue on even into the afterlife…you’re mistaken. So, if you’re expecting the all-out costume…don’t. As a prank, Burger King covered itself in a white blanket and spray painted “McDonald’s” on it—with a little tint of shade:

On top of dressing up as the “golden arch,” the New York location also served up flame-grilled burgers with matching containers that said McDonald’s.

One has to wonder if this is straight up trademark infringement or just some Spooktacular fun? If we are being serious, it’s very unlikely that this would lead to any legal claims, or anyone ghoulish enough to bring such a lawsuit to the courtroom.