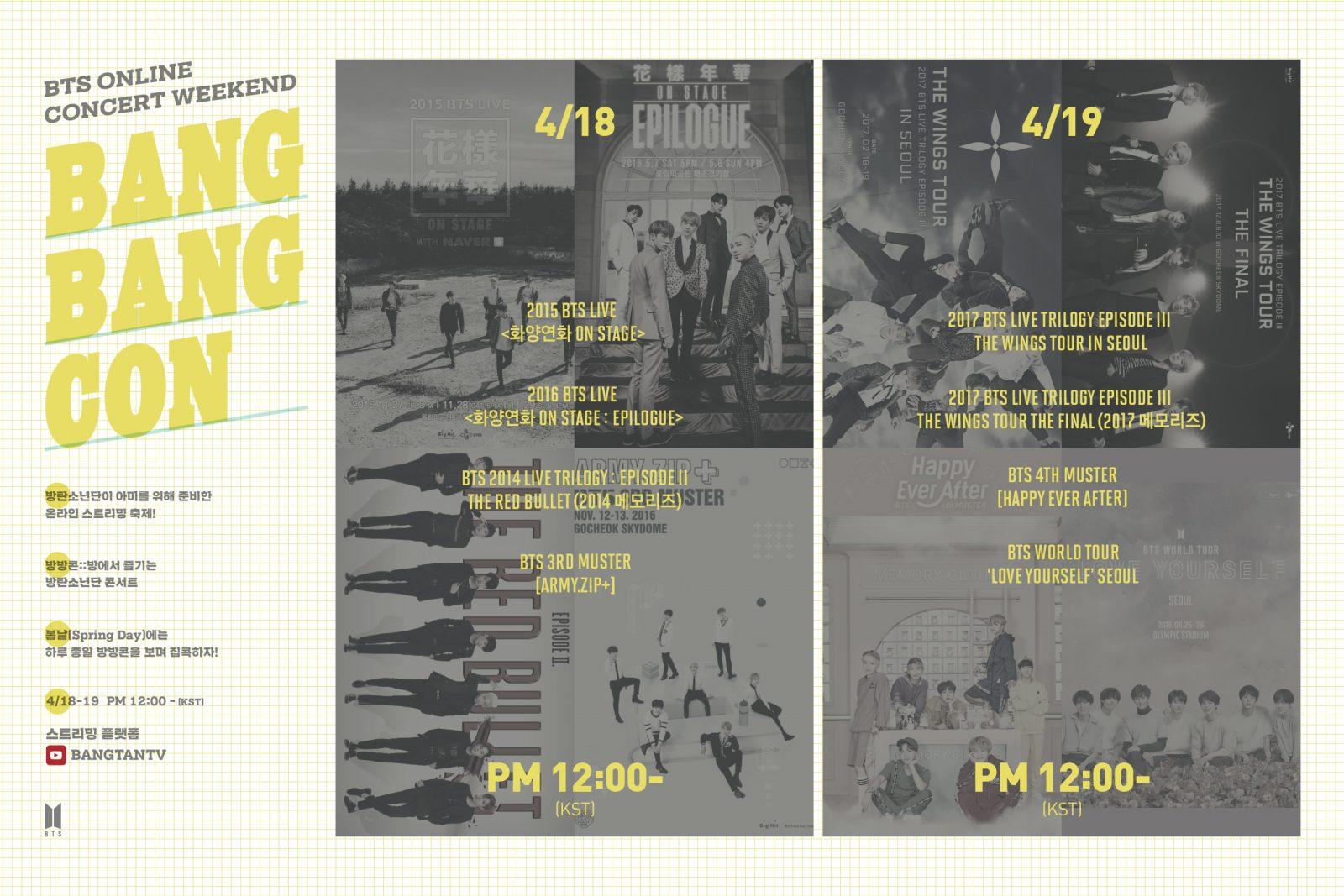 BTS would have kicked off their “Map of the Soul” world tour this weekend but unfortunately, the first dates in South Korea were cancelled due to the Coronavirus outbreak and the North American leg is postponed until further notice. To make it up to their fans, they announced a new, online event set for next weekend.

“BANG BANG CON” is a special, weekend concert event that will stream several of the group’s live shows, previously released on DVD. The official description calls the event an “at-home BTS concert experience” and tells ARMYs to “spend a couple of Spring Days comfy at home with BANG BANG CON.”

As perviously mentioned, “BANG BANG CON” will feature several of BTS’s live concert events; these include concerts from past tours and musters, and each takes places in Seoul, South Korea. While the official tweet shows the concerts airing in a different order, I will (briefly) talk about them in chronological order.

BTS set off on their first headlining concert tour in 2014. “The Red Bullet” tour initially took place in Asia, but later extended itself to Malaysia, Australia and the United States; the tour became the group’s first to go outside of South Korea.

Following the release of The Most Beautiful Moment in Life Part 1 and Part 2, BTS embarked on their third tour—the second was held in Japan to support their first Japanese release.

The short tour primarily took place in South Korea and Japan, but after the release of their compilation album, The Most Beautiful Moment in Life: Young Forever, an extension tour was announced in 2016 to wrap up the era: the epilogue.

Every year, BTS hold musters—or yearly fan meetings—as a way for the group to put on a special performance for the BTS ARMY. These usually take place in their home country of South Korea, but they invite fans from all over the world to join them; additionally, BTS hold musters for their Japanese fans as well, performing the Japanese versions of their songs, as well as any Japanese singles they released.

Each one comes with a specific theme and photo shoot, with “ARMY.ZIP” as the one for 2016; they also released special merchandise sold only during the event.

The initial tour took place in 12 countries all throughout 2017, making it their biggest tour to date at the time; due to tickets being in such high demand and selling out quickly, additional shows were added to several of their stops.

To wrap up the tour, BTS announced three finale shows, also known as “The Wings Tour: The Final,” held in South Korea. The shows featured songs from the original tour lineup, as well as some from their Love Yourself: Her EP, which came out in September of that year.

“BTS 4th Muster [Happy Ever After]”

BTS’s fourth muster, “Happy Ever After,” came at the start of 2018, one month after “The Wings Tour Final” wrapped up the following month. Just like the previous muster, this one took place both in South Korea and Japan and had official merchandise specifically for the event.

This tour became BTS’s most attended tour to-date; just like “The Wings Tour,” tickets sold out in mere minutes after they went on sale and they announced additional dates shortly after. Following their shows in Fukuoka, Japan, Big Hit Entertainment announced a stadium extension tour titled “Love Yourself: Speak Yourself,” which began in May 2019 and also ended with three finale shows, marking the end of the Love Yourself era.

Where and When to Watch

The concert streams will take place on BTS’s official YouTube channel, BANGTANTV, but those who have the Weverse app downloaded may also watch from there; if ARMYs watch through Weverse, they have the chance to connect their official BTS light sticks to have it sync with the concerts, which is a neat feature they added.

For those of us living in the United States, the streams begin at 12pm Korean Standard Time each day; this equals out to 8pm PST and 11pm EST. Not the most ideal of times, but you can be sure that ARMYs will stay up to watch the shows—myself included.

In the end, BTS and Big Hit Entertainment creating this concert weekend may help cheer up those who were looking forward to the “Map of the Soul” tour. “BANG BANG CON” is a great way for the BTS ARMY to virtually come together and relive many of BTS’s past concerts, and everyone has a front row seat in the comfort of their own home.